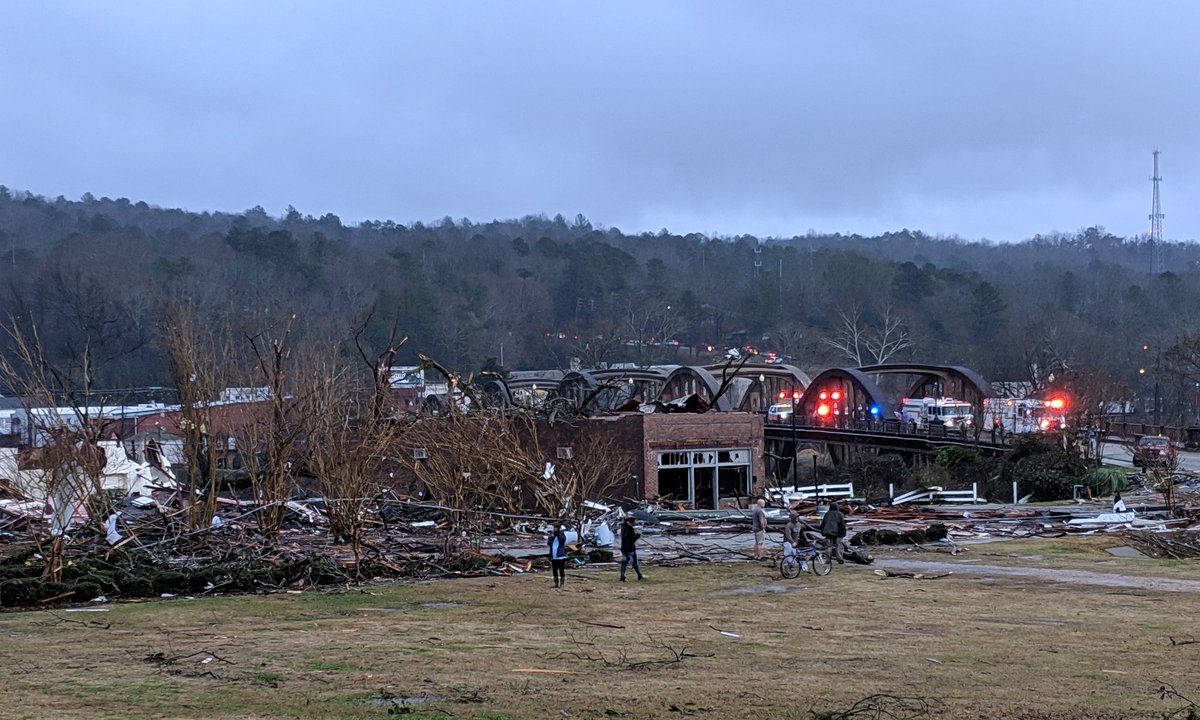 Saturday night, downtown Wetumpka was struck by an EF-2 tornado. Assessments of the damage are ongoing; but several buildings are confirmed down. Most notably the historic First Presbyterian Church of Wetumpka is a total loss.

Alabama Gov. Kay Ivey said on Twitter, “I’ve talked with Wetumpka Mayor Willis & have assured him of available assistance. I’ve also been receiving updates from @B_Hastings_EMA. Now is the time for first responders to do assessments, recovery & damage control. Praying for all affected.”

“My thoughts are with all those impacted by the tornado in Elmore County yesterday, and my office stands ready to assist in whatever ways we are able,” U.S. Rep. Martha Roby, R-Montgomery, said. “As we await further details about the full scale of damages, I will be praying for those who have been injured.”

“Join me in saying a prayer for our fellow Alabamians in Elmore County impacted by these tornadoes,” U.S. Rep. Bradley Byrne, R-Montrose, said. “Let’s also say a prayer for local officials and first responders as they work to assess the damage.”

Sen. Richard Shelby said on social media: “Thinking about the people in and around #Wetumpka affected by the devastating tornado. Thank you to local law enforcement and first responders on the scene.”

Wetumpka Mayor Jerry Willis told reporters with WVTM TV Channel 13 that there is significant damage to the city’s downtown.

“We’ve been hit very hard,” Willis said. “I’ve been here 53 years. These things have been here a whole lot longer than me. It’s just devastating to see this — how it snaps off power poles and trees, the buildings that we have. Our police station, about half of it is damaged, affecting our police department.”

More than two dozen homes and buildings were destroyed including the senior center. Other structures were damaged in the storm.

On Monday, Ivey will join Willis and other city and county officials to conduct a tour of the damaged areas in Wetumpka impacted.

Following her tour, Ivey will meet with officials and then address the Alabama press regarding the damage she has seen.

Volunteers looking to help with the clean-up efforts in downtown Wetumpka or in the county should contact the Elmore County EMA office at (334) 567-6451. The Elmore County Commission and City of Wetumpka are appreciative of volunteers wanting to assist but want to ensure coordination to maximize recovery efforts and resources.

Severe weather is an ever-present threat to people in Alabama. While fortunately, it appears, as of press time, that no one died in this tornado, more people in Alabama have been killed by tornadoes since World War II (and we started keeping an accurate count) than in any other state.