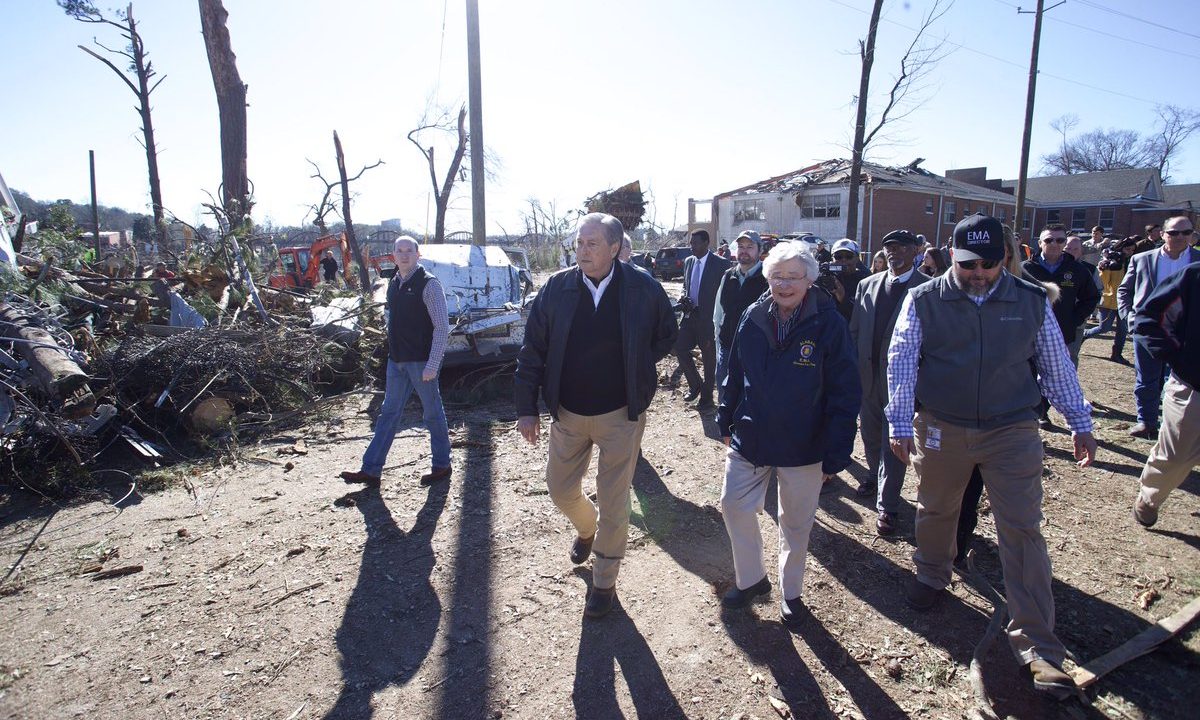 Gov. Kay Ivey and Alabama Emergency Management Agency officials were on the ground in the historic section of Wetumpka Monday, which was hard hit by an EF2 tornado late on Saturday.

“Though the tornado damaged & destroyed several homes, churches & other community buildings, we’re all grateful there wasn’t any loss of life,” Ivey said on Twitter. “There’s still much to be done in the coming days & weeks, but I assure the people of Wetumpka the state of Alabama will be here to assist.”

Particularly hard hit was the First Baptist Church of Wetumpka. The steeple was knocked off the 1968 built current sanctuary; but the adjacent original sanctuary, built between 1847 and 1852, lost its roof completely and has damage inside the building. A third First Baptist Church building on the campus was a total loss.

“DUE TO STORM DAMAGE OUR SERVICES TOMORROW WILL BE HELD AT THE WETUMPKA CIVIC CENTER AT 10 A.M.,” the First Baptist Church said on their website. “PLEASE CONTINUE TO BE IN PRAYER FOR OUR COMMUNITY AS WE CONTINUE TO MOVE FORWARD.”

The sanctuary of the historic First Presbyterian Church in Wetumpka, built in 1856, was completely leveled.

“Friends, The tornado that hit Wetumpka flattened the sanctuary and East wing of the church and tore off the back corner of our house. Stanton was home but escaped unscathed. No one else was home. We are okay. We do not need anything at the moment other than prayers. We are so blessed to live in the caring community we live in. Love your peeps. That’s all that really matters,” the pastor of the First Presbyterian Church, Rev. Jonathan Yarboro, said on the Church website.

Though the tornado damaged & destroyed several homes, churches & other community buildings, we’re all grateful there wasn’t any loss of life. There’s still much to be done in the coming days & weeks, but I assure the people of Wetumpka the state of Alabama will be here to assist. pic.twitter.com/YPRC2U7VRx

Both Churches were on the National Register of Historic Places.

The back section of the Wetumpka Police Station was blown away and the rest of the building suffered severe damage. Prisoners from the jail were moving all of the furniture and file cabinets from the ruined police station to the City Administrative building while we were on the ground.

The Alabama Department of Transportation, the Alabama Law Enforcement Agency, and numerous volunteers were on the scene protecting the area from looters and removing debris.

Gov. Ivey said, “‏On this #MLKDay, it’s great seeing hundreds of volunteers & first responders working together, while enduring the cold, to remove debris & get things back in working condition in @CityofWetumpka. @ElmoreCoEMA @AlabamaEMA”

One resident identified some of the demolished homes as being built in the nineteenth century.

One elderly resident whose home was intact but near ground zero came out to ask the Alabama Political Reporter about the other sections of his town. If they had suffered damage.  We assured him that his town was still there, even if all of his neighborhood was not.

Economic developer Nicole Jones toured the area and shared, “This was a difficult scene, but we are thankful to see so many people spending their day off, this Martin Luther King Day, to help rebuild the precious community of Wetumpka.”

“A member of the Wetumpka Police Department shared with us that officers’ lives were spared because they left the building to run an errand. [The tornado destroyed the station]. There is no question the Lord has his hand on this. Prayers for Wetumpka.”

Four police officers had been in the station watching the storm coverage as the severe weather approached; but they made the decision to get in their vehicles to go out, just before the tornado touched down.

Monday night, the City re-opened the Bibb Graves Bridge. Traffic will encounter a four way stop condition on the west side of the bridge until ALDOT forces can replace the traffic signals and poles destroyed during the tornado. The City is requesting travelers who use the bridge to travel through town to Montgomery should use an alternate route until the signal is fully installed and operational.

Elmore County said in a statement that: “Beginning at 5:00pm on Monday, January 21, 2019, all calls regarding storm damage or volunteer information should be directed to 211. The Elmore County EMA office will be closed at 5:00pm and will reopen tomorrow at 8:00am. All emergency calls are to be directed to 911.”

There has been an outpouring of persons seeking to volunteer in the area. The city has stopped taking new volunteers at this time, but there will be a need for this weekend.