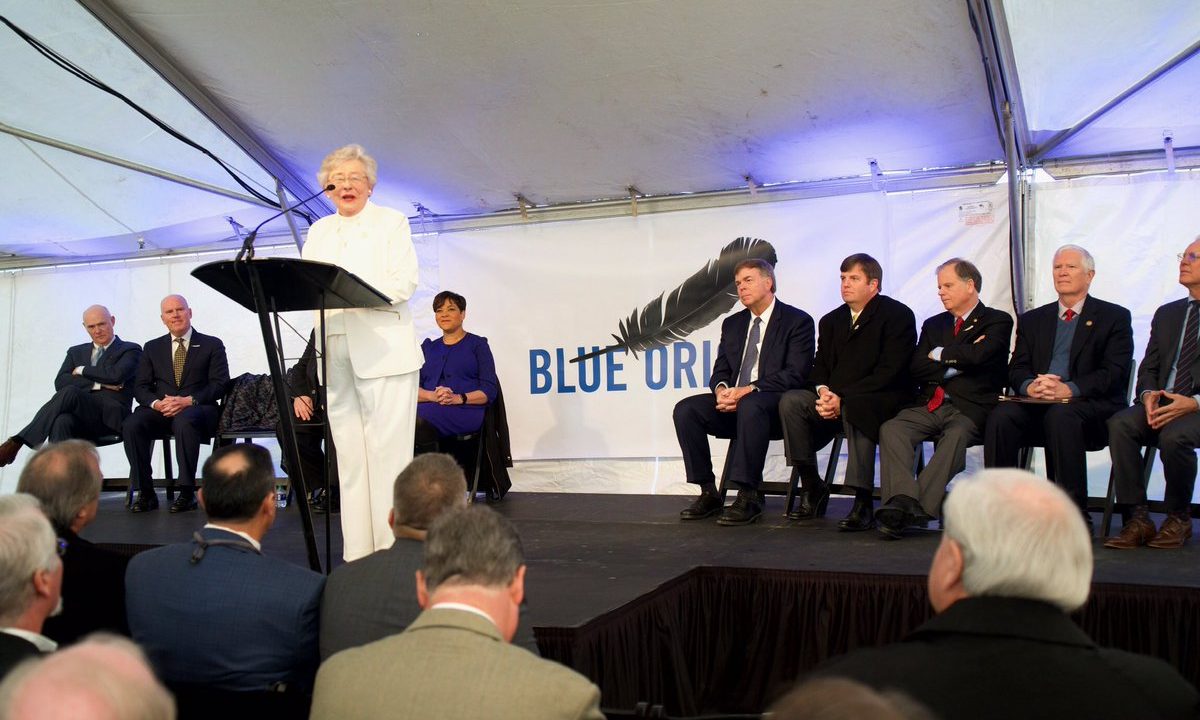 “Blue Origin is a welcome addition to Alabama’s roster of world-class aerospace firms, and its new rocket engine facility in Huntsville will expand the state’s already robust capabilities in space flight,” Ivey said. “Blue Origin is making a significant investment in Huntsville, and I’m certain the company will discover the many benefits of doing business in Sweet Home Alabama’s aerospace cluster.”

Blue Origin was selected by United Launch Alliance (ULA) in September 2018 to supply their next-generation Blue Engine 4, or BE-4, for the first stage of ULA’s Vulcan Centaur Rocket. It will also launch Blue Origin’s own rocket.

“United Launch Alliance welcomes Blue Origin to the great state of Alabama and to join the other aerospace companies that have made Rocket City our home for decades,” ULA CEO Tory Bruno said. “A little more than three months ago, ULA chose Blue Origin’s BE-4 engine to power our Vulcan Centaur rocket, which we are manufacturing at our facility in Decatur, Alabama. I am pleased that Blue Origin has chosen to join the more than 200 ULA suppliers doing business here in Alabama. The state of Alabama knows how to attract and help business grow and I could not be more thrilled to be part of the resurgence of rocket and engine development in the Tennessee Valley.”

“He could not be here today, but I know the work that he has done on this project,” Jones said. “Jones said that growing up in the fifties and sixties he dreamed of going into space like John Glen and Allen Shepherd.

Huntsville area economic developer Nicole Jones told the Alabama Political Reporter, “United Launch Alliance (ULA) selected Blue Origin’s BE-4 engine to power the booster of the Vulcan Centaur rocket. Now that the company won the contract, Blue Origin will construct their facility (announced in under the Saturn V rocket at the US Space and Rocket Center in June 2017) on approximately 46 acres in Cummings Research Park.”

Since NASA retired the space shuttles with no replacement, the United States has not sent astronauts into space. The U.S. astronauts have been riding with the Russian space agency. The United Launch Alliance’s American built rockets in Decatur have been relying on Russian built rocket engines. The BE-4 engines being built in Huntsville changes all of that.

“ULA has been dependent on Russian rocket engines,” said Rep. Mo Brooks, R-Huntsville. “We don’t want to be dependent on any other nations that may or may not be reliable. It is wonderful that the BE-4 rocket engine is going to be built right where we stand today.”

“In addition to bringing hundreds of jobs to the area, the new Blue Origin BE-4 rocket engine production facility will allow the United States – Alabama – to take astronauts once again into space without dependence on other nations,” Nicole Jones said. “Two out of three of the major launch systems generated for the next decade of space flight will have engines built at this facility.”

“The United States is in the Space Race again,” Nicole Jones added.

“And what an appropriate and nostalgic time in history as we, in 2019, will celebrate the 50th anniversary of man on the moon as well as Alabama’s bicentennial,” said economic developer Nicole Jones. “The brilliant minds at Blue Origin and United Launch Alliance are an incredible asset to our state and nation. The presence of these global organizations highlights their important role as our state maintains its position of leadership in the aerospace industry.”

“It’s a great day here in Rocket City,” said Bob Smith, CEO of Blue Origin. “Thanks to the votes of confidence from United Launch Alliance, from the Air Force for national security missions, and from Huntsville and the state of Alabama, we are breaking ground on a facility to produce our world-class engines and power the next generation of spaceflight.”

The BE-4 is America’s next rocket engine and is made for both commercial and government missions. The production of this engine would end the nation’s dependence on Russia for access to space for critical national security space systems.

The plant will be built on 46 acres at the corner of Explorer Boulevard and Pegasus Drive in Cummings Research Park. The project will produce more than 300 new jobs for Huntsville. The Huntsville manufacturing plant is expected to open in 2020, and the first flight test of the new engine is expected in 2021.

“Our workforce and our community are ready to deliver for Blue Origin, an innovative commercial space company that is changing what we think is possible in space,” said Huntsville Mayor Tommy Battle. “These BE-4 engines will power launch systems to put everything from satellites and products into orbit to space tourists and perhaps even space settlers into the final frontier. You truly can’t get to space and explore all of its untold promise without going through Huntsville first.”

Blue Origin’s rocket manufacturing plant is the latest exciting addition to Huntsville’s Cummings Research Park, which is the second largest research park in the United States and fourth largest in the world.

“We are thrilled to officially welcome Blue Origin to Cummings Research Park,” said Erin Koshut, The Park’s Executive Director. “As we like to say, the research and development happening here is driven by science and powered by people. CRP has come a long way since it was established in 1962. It is now 91 percent occupied and growing more by the day. We can’t wait to see construction take shape on the new Blue Origin facility and assist the company in recruiting talented people to join their Huntsville team.”

“ULA’s Atlas and Delta rockets are the most successful space launch vehicles in history, having launched more than 130 missions with 100 percent mission success.” ULA’s Bruno added.

“Today, we celebrate the culmination of those decades of knowhow and invention into the transition to our new Vulcan Centaur rocket. Vulcan Centaur is one system for all missions. It will embody our expertise and reliability while providing advanced technology to our warfighters, being superior in both cost and capability. Vulcan Centaur is the only launch vehicle with a design that is centered on our customers’ national security space mission. Vulcan Centaur will provide for our nation’s needs today and into the future. We look forward to our partnership with Blue Origin, building the advanced BE-4 engine to power our next-generation rocket, right here in Alabama!”

Students from Bob Jones High School, New Century High School, and Sparkman High School attended the Blue Origin’s groundbreaking in Huntsville to display projects they have been working on for the past year. The engineering classes at the three local high schools are participating in a collaboration project called DreamUp.

Each class is creating a payload that will launch on a future Blue Origin New Shepard mission. The projects will be enclosed in small cubesats weighing less than 1.1 pounds; one will test if voltage is affected by microgravity using a Raspberry Pi, and another will test the electrical current created by heat transfer in space. The students have been working on their projects since Spring 2018, submitting monthly reports to the technical team at NanoRacks. Their work is being done in collaboration with DreamUp PBC, the leading provider of space-based educational opportunities, and NanoRacks, LLC, the world’s leading commercial space station company.