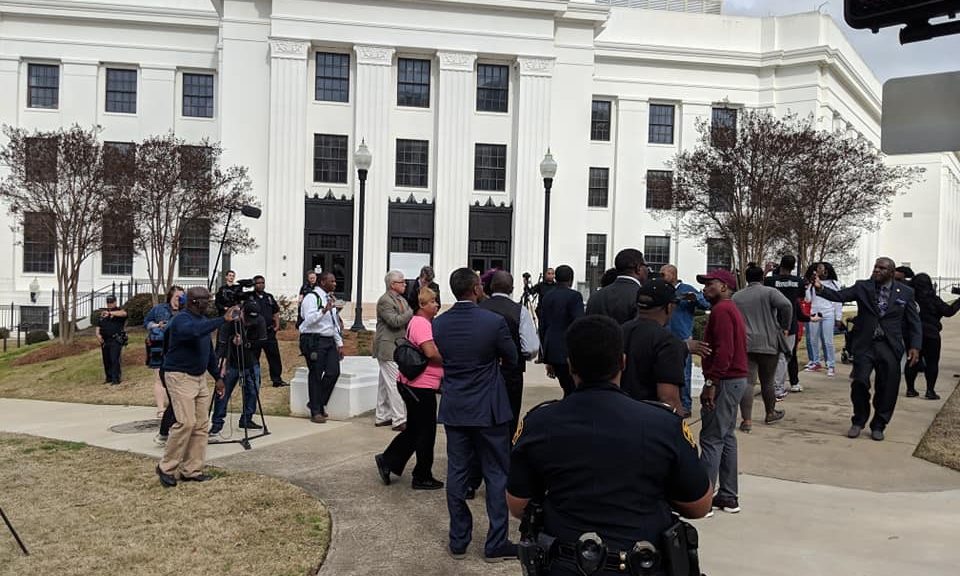 Fallout over Alabama Attorney General Steve Marshall’s decision not to prosecute a police officer for shooting and killing an innocent man during a mall shooting last November reached the national level on Wednesday.

Marshall announced on Tuesday that he wouldn’t seek charges against an unnamed Hoover cop who shot and killed EJ Bradford on Thanksgiving night, following a shooting that took place in the Galleria in Hoover.

Following the initial shooting that left two people injured, Bradford pulled a weapon he was licensed to carry to protect himself when he was shot three times from behind by the officer, who never attempted to engage Bradford before killing him.

On Wednesday, Marshall’s decision hit the national press, from the Washington Post and Los Angeles Times to CNN and NBC. It was not well received.

By midday on Wednesday, a crowd of protesters, including Bradford’s parents, had gathered outside of Marshall’s office in Montgomery, chanting and demanding to see the AG. When some of the protesters attempted to enter the building — which authorities had locked — two arrests were made and police broke up the protest, citing “disorderly conduct” laws.

That protest followed others in the City of Hoover on Tuesday night, where protesters burned American flags.

More protests were planned, and law enforcement officials privately told APR that they are concerned with the anger of the participants and the fact that the protests aren’t centered in any one area.

“(Marshall’s) characterization of EJ Bradford as a ‘threat’ that needed ‘eliminating’ reveals how little regard the Attorney General has for the life of this black man,” said Dillon Nettles, a policy analyst for the ACLU of Alabama.

“We won’t stay quiet as law enforcement continues to inflict lethal violence against black people and attempts to justify it. Police officers need to be held accountable when they shoot and kill innocent people.”

Nettles and the ACLU also called on the NRA and President Trump to speak out on Bradford’s behalf, acknowledging that he was “a good guy with a gun” and was wrongly killed.

Nettles said the ACLU is reviewing the matter and considering legal action.

It is also apparent that Bradford’s family is considering legal action against the police officer, the City of Hoover and the AG’s office. At a press conference in Hoover, the mayor, Frank Brocato, said the city will stand behind the officer who shot Bradford. That includes providing money to pay the officer’s legal fees that result from any civil suits.

In Montgomery on Wednesday, Bradford’s father, Emmantic Bradford Sr., called for Marshall to come outside and speak with him. Marshall never emerged from the building.

To date, Marshall has not personally spoken with the Bradford family about his decision not to charge the officer.

The 46-year-old Birmingham resident entered the Capitol with his dog.

The video shows an officer stomping the legs of a suspect inside a convenience store.