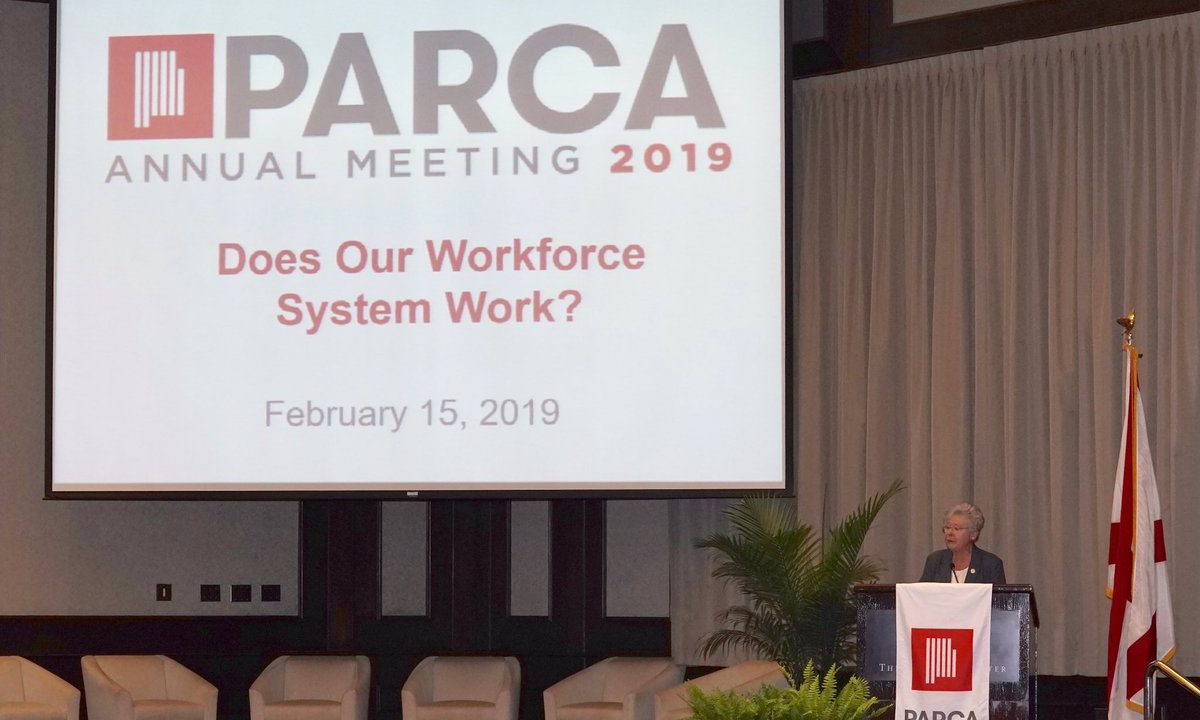 “More Alabamians are working than ever before in history,” Ivey told the group. “It proves that what we are doing is, in fact, effective.”

“Alabama is in a position to achieve greater success,” Ivey said in her keynote address. “And as we look to our future, more than ever before, now is the time that we must be sure that our workforce is well-equipped to face the opportunities and the jobs of tomorrow.”

Nicole Jones, economic developer, told the Alabama Political Reporter, “The PARCA Annual Meeting provided a diverse set of viewpoints from members of the public and private sector of how to respond to workforce development-related challenges. Communication between businesses and school systems is a two-way street and must be a reciprocal, continuous process. No legislation is required to pick up the phone, start a conversation, and collaborate to design programs for the betterment of our future workforce.”

Chauncey Lennon of the Lumina Foundation said, “Alabama needs a system that makes the value of degrees more transparent so students can see what they actually can earn. College and high school are only two of the credentials that matter in the labor market. Alabama needs to focus on all ways to help employees earn better wages such as diplomas, apprenticeships, degrees, certifications, badges, licensures, micro-credentials, and certificate programs. Alabamians can add certifications to degrees to enhance their skills and marketability.”

Raphael Bostic is the President and CEO of the Federal Reserve Bank of Atlanta.

“Workforce development can play a central role by helping individuals build their knowledge and skills and make a decent living,” President Bostic said. “The results are higher tax receipts and lower spending on public assistance, incarceration, and other programs.”

“The labor force participation rate—particularly for individuals between their mid-20s and mid-50s—is lower in the Southeast than in the rest of the country,” Bostic said. “Alabama, Louisiana, and Mississippi have especially low rates. In these three states, an unusually large share of people report that they don’t participate in the job market because they are too sick or disabled to work, according to Atlanta Fed research. Interestingly, the prevalence of disability and illness in Alabama is higher than in most states across all ages, non-Hispanic ethnicities, and education levels, and in both urban and rural areas. If Alabama’s labor force participation rate were closer to the national level, then another 200,000 people would become part of the state’s workforce, which could help resolve what are projected to be fairly serious labor shortages in the coming years.”

“As we go forward with workforce programs and systems, please know that one person can make a difference in helping someone find doorways to opportunity that are not always apparent,” Bostic added. “We at the Atlanta Fed look forward to working with you as you help others find these doorways.”

Economic developer Nicole Jones told APR, “When appointed to his position in 2014, Secretary Fitzgerald Washington of the Alabama Department of Labor analyzed a trend in unemployment rates and discovered that five counties (Wilcox, Dallas, Perry, Lowndes, and Greene) had consistent, unusual unemployment. The department then took a proactive approach to identify the need and address the issue.”

“Wilcox County, in 2014, had an unemployment rate of 16.1 percent – the highest in Alabama and in the United States,” Secretary Washington said. “The Alabama Department of Labor recruited employers and hosted a job fair in these rural counties. In October 2017, unemployment fell in these counties below the double digits.”

“Unemployment is sometimes an awareness issue,” Washington said. “People do not know what jobs are out there. If you visit joblink.alabama.gov, 28,000 jobs are available now. Currently unemployment is at 3.9 percent, the lowest unemployment rate in state history.”

PARCA is Alabama’s first and only independent research center. It is a nonpartisan nonprofit research center that promotes best practices and evidence-based decision making in Alabama’s governments, schools, and nonprofits. Founded in 1988,

PARCA says that it provides objective research and evaluation, policy education and recommendations, and technical assistance in the areas of government efficiency, education and workforce development, and quality of life