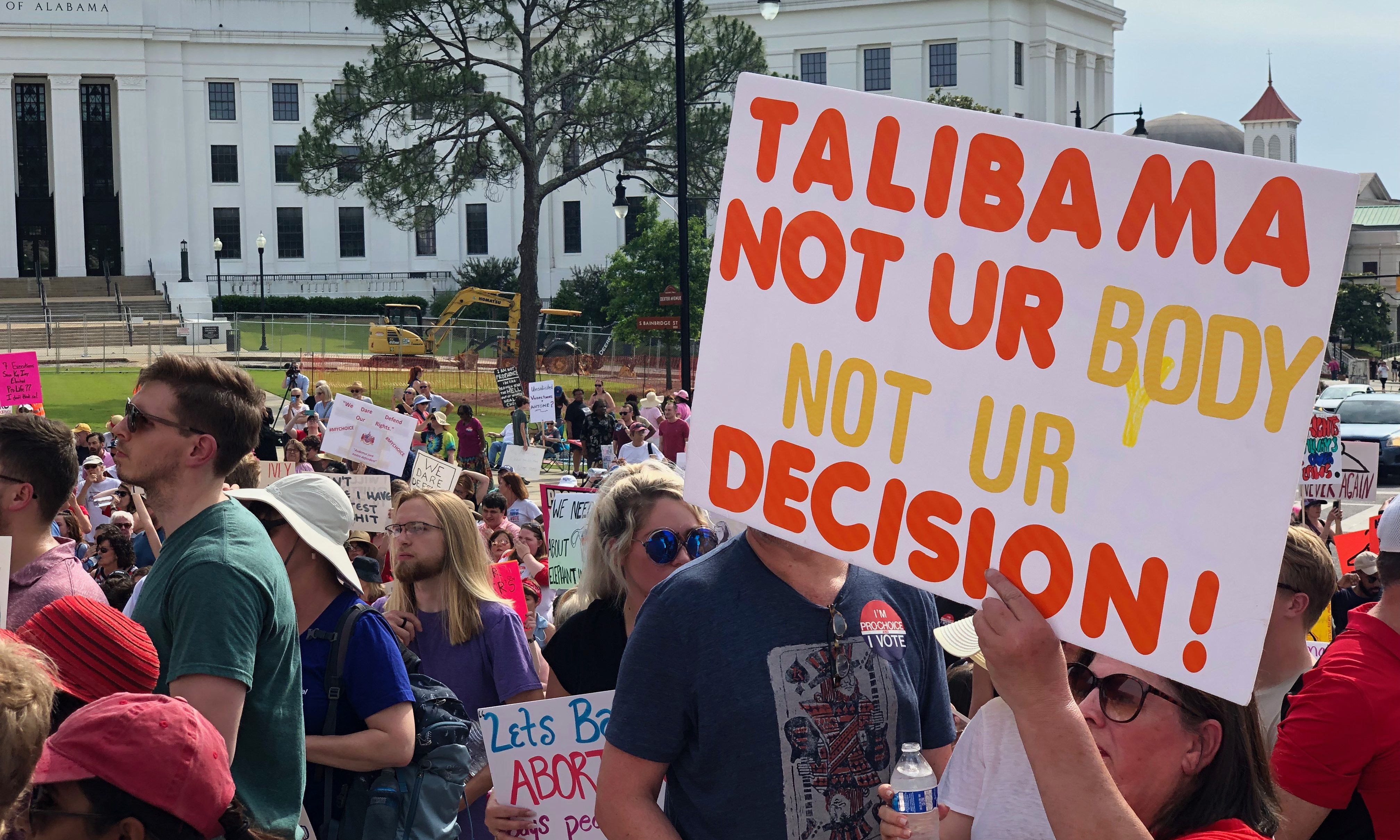 On Sunday afternoon, Alabamians protesting the abortion ban bill recently passed by 25 white Republican men in the Alabama Senate and signed into law by Gov. Kay Ivey, turned out in large numbers to protest the bill at a March for Reproductive Freedom held in downtown Montgomery

The large crowd was diverse in every way: gender, race, ethnicity, age and disability status. While the majority of protesters were females, males were significantly represented, many of whom wore brightly colored vests that read “Clinic Escort.”

One of Montgomery’s most famous downtown landmarks, the Court Square Fountain at the end of Dexter Avenue, was the gathering spot for the event organizers. People began arriving in a steady stream at around 3:30pm and the crowd grew quickly.

By 4 p.m, the march began and a large and vocal crowd of at least 500 protesters began walking up Dexter Avenue towards the steps of the State Capitol building.

Staci Fox, director of Planned Parenthood Southeast, held the megaphone at the front of the march and led the protesters with chants of “My body, my choice! Your body, your choice!” and “Vote them out! Vote them out!”

Marchers carried signs with statements such as “Stop the war on women!” and “Keep your theology off my body!” Many signs depicted coat hangers

Upon arriving at the State Capitol steps, rally attendees were greeted and heard from a series of speakers from the various advocacy groups opposed to the abortion ban bill, including the ACLU of Alabama, Hometown Action and Yellowhammer Fund, a nonprofit that helps low-income women obtain abortions. Emerge Alabama, an organization dedicated to recruiting and resourcing female political candidates, indicated that they are actively seeking female Democratic candidates to run for the Alabama Legislature.

Additionally, everyday Alabamians stepped forward to share their personal experiences with abortion. A powerful moment occurred when a female rally attendee in the crowd asked to come forward and share her personal story, something she stated she had never publicly done until that day.

She stepped up to the podium, paused and asked the crowd to please be patient in case she began to cry.

After a chorus of support from the crowd, she continued, “I am the ‘exception to the rule’ that everyone pushing this harmful bill keeps talking about. I was raped at age 13 and again at age 18. The second time I was raped, I became pregnant.”

She explained that she confided in her parents, who helped her explore all options available to her.

“Option three was the clinic, the Planned Parenthood clinic. I chose the clinic and it was by far the best decision for me,” she said.

She also discussed the nature of sexual trauma experienced by victims, stating that Alabama’s abortion ban bill repeatedly traumatizes survivors of rape and other forms of sexual violence.

Elsewhere in Alabama, similar protest rallies were held this weekend. On Saturday, the Mobile protest rally began in the city’s historic Bienville Square and included a march throughout downtown.

Most other protests, marches and rallies around the state were held on Sunday afternoon. In Birmingham, Democratic presidential candidate U.S. Sen. Bernie Sanders held a scheduled campaign rally at 4 p.m., just prior to the 6 p.m. Birmingham protest rally in Kelly Ingram Park, ensuring a large and enthusiastic crowd of more than 2,000.

In Huntsville, so many attendees were expected that the event was relocated to a larger venue to accommodate the anticipated crowd. Rep. Anthony Daniels, the Democratic Minority Leader in the Alabama House of Representatives and a member of the Huntsville legislative delegation, spoke out against the bill to a crowd of more than 1,000 protesters assembled in Butler Green Park.

Additional protests are planned throughout the state. Protesters in Anniston have announced a protest rally at 5 p.m. on Noble Street, while Auburn High School students will rally and protest at the State Capitol in Montgomery on Saturday at 10:30 a.m.