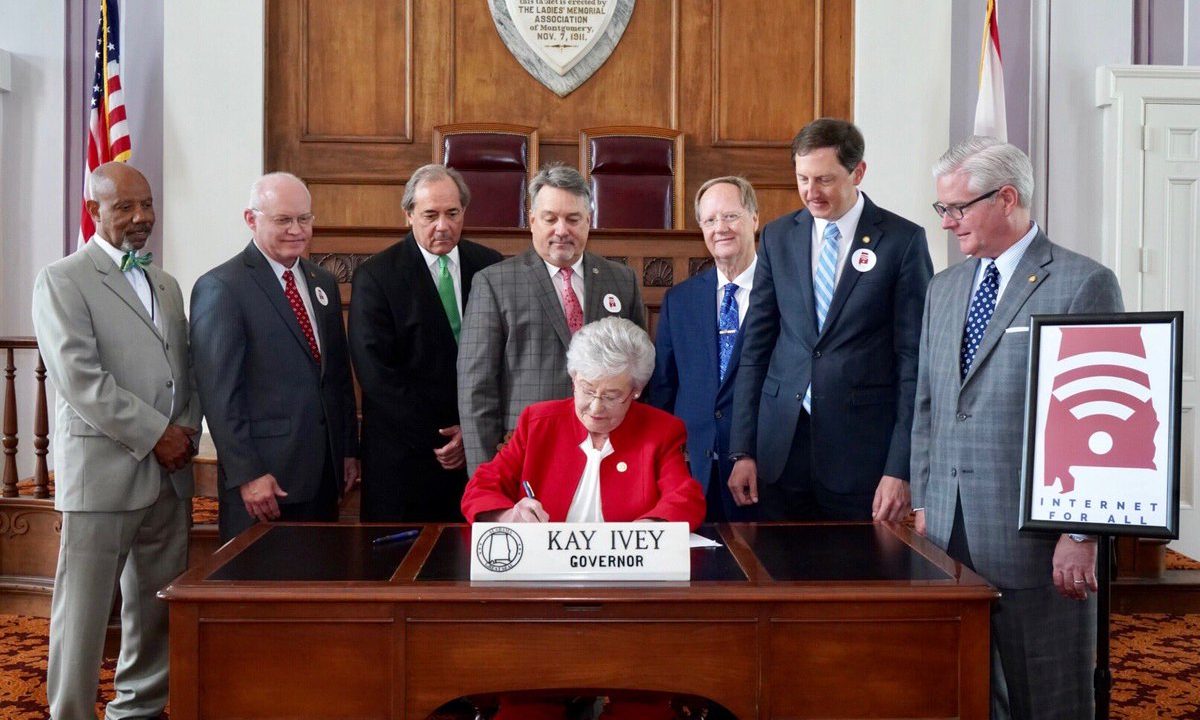 Sponsors say that SB90 and HB400 will expand and improve rural broadband accessibility in ways that are critical to economic viability for small towns, small businesses, rural hospitals and libraries. Internet connectivity also prepares the new economy in Alabama to grow and thrive in a technological age that is rapidly expanding.

“These bills will open a whole new world to so many of our citizens who have been left behind on the information superhighway,” Ivey said. “I congratulate our Legislature for coming together to help make providing broadband internet access easier and more efficient. I look forward to seeing the great strides that our rural citizens will take now that they have the same opportunity as those who live in larger cities.”

The Broadband Using Electric Easements Accessibility Act will allow electricity providers to use or allow the use of existing or future electric easements for broadband purposes. Senate Bill 90, the Rural Broadband Access Initiative, amends and expands the Alabama Broadband Accessibility Fund enacted in 2018, increases the minimum service threshold and amends the amount of grants that can be awarded for specific broadband projects.

Shedd thanked the governor for making rural internet a priority and everyone that worked together on passing HB400 and SB90, whom he called the “HB40 and SB90 family.”

Shedd said HB400 allowed electric operators to operate and install broadband on their existing easements either directly or through affiliates.

Shedd said the electric companies will not be allowed to requires residents to purchase internet access in order to get electric service.

SB90 allows the Alabama Department of Economic and Community Affairs to expand the grant program for broadband providers in rural and under-served areas. The grant initiative is supervised by ADECA and the Alabama Rural Broadband Legislative Oversight Committee.

“Just as years ago, co-ops and private companies invested in bringing electricity to rural areas across the country to improve quality of life and create jobs for millions, this legislation will continue to expand access to high-speed internet to those same households and businesses, creating new jobs and opportunities in the process,” Scofield said.

The bill also raises the minimum transmission speeds required to participate in the grant program and creates a “middle mile” component, which will allow companies to build additional infrastructure to provide more bandwidth for high-speed internet access.

“I am thrilled that Gov. Ivey has signed these bills that will be so helpful to our rural constituents,” said Sen. President Pro-Tem, Del Marsh, R-Anniston. “More than 840,000 Alabamians have not had access to broadband and therefore have lacked total, fair access to our worldwide economy. I hope to see movement on getting as many people connected as soon as possible.”

House Speaker Mac McCutcheon, R-Monrovia, called the signing of the bills the beginning of a new day for Alabama business.

“Small businesses all across the state can now expect a fair shot at the global economy,” McCutcheon said. “It is an exciting time for the education community, entrepreneurs, for rural health workers and patients who will have access to advances in tele-medicine and for our farmers who will benefit immensely from broadband.”

“This is a critical piece of infrastructure legislation,” said Senate Majority Leader Greg Reed, R-Jasper. “When people think about infrastructure, it’s traditionally just roads and bridges, but in a digital age that relies heavily on cutting edge technology, investing in expanding and improving broadband is equally as important,” Reed said. “This bill sets up rural Alabama for further growth and prosperity, and I thank Senator Scofield for spearheading this important work.”

The World Bank commissioned a study in 2014 that showed a 10 percent increase in broadband penetration could increase economic growth by 1.2 percent. It also stated that doubling broadband speeds can add 0.3 percent to GDP growth.