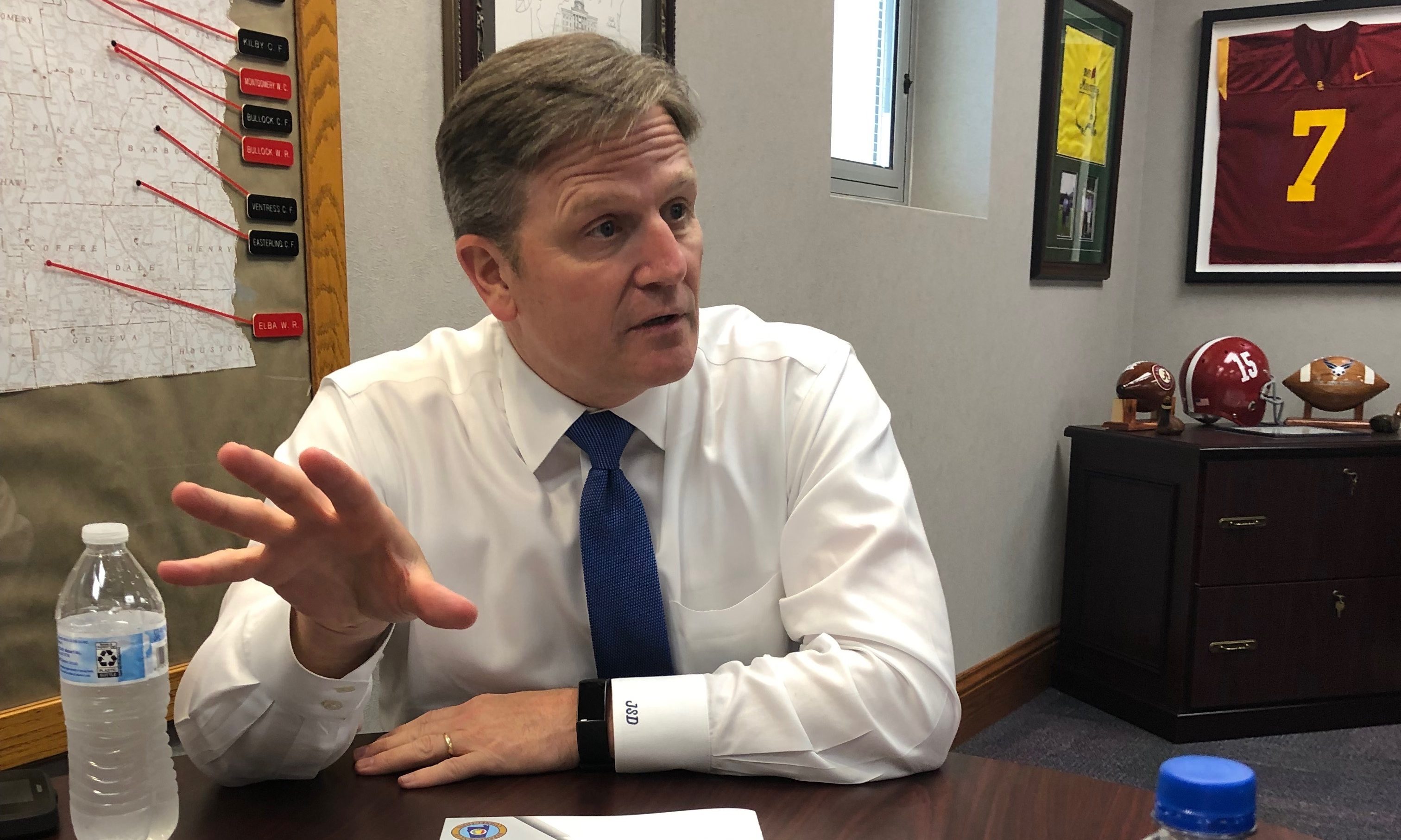 Alabama’s Department of Corrections Commissioner Jeff Dunn believes the department’s new strategic plan is an essential part of moving the beleaguered prison system out of its dark past and into the future.

“A strategic plan in my judgment — given my Air force experience — is absolutely critical to pulling an institution together,” Dunn said in an interview with the Alabama Political Reporter.

Nearly two years in the making, the detailed ADOC Strategic Plan for 2019-2022 is the first of its kind in Dunn’s estimation.

“It sets a clear mission, and a clear direction based on our values of professionalism, integrity and accountability,” Dunn said.

For nearly 40 years, the state’s prisons have been places where people convicted of state crimes have languished in near barbaric conditions. Recent rulings from the federal bench and an investigation by the U.S. Department of Justice have exposed the many horrors that befall those who are imprisoned by the state. Dunn acknowledges the problems that have occurred on his watch but has also been proactive in addressing the systemic culture of decades-old neglect.

Still, some lawmakers are reluctant to believe that conditions are as dire as federal reports have made evident. Dunn knows that area and believes the DOJ findings are helping to push needed reforms.

“The DOJ report brought attention and light to this situation in a way we haven’t been able to do in the past,” Dunn said.

Dunn said he presented the strategic plan to DOJ, and it has received a positive reception.

“The point I’m trying to make is we’re not waiting on anybody,” Dunn said. “We’re moving out on this, and we’re looking for folks to join us and to help us. We think the DOJ wants to do the same thing.”

Dunn believes Gov. Kay Ivey has given “clear commander guidance,” and that he and his team are working diligently to address not only the present needs but also offer a way forward.

Beyond the mere necessity of hiring personnel, improving infrastructure, offering inmate-centric programs and ensuring a professional culture among correctional officers is to begin the incarceration process with a goal of rehabilitation.

According to Dunn, nearly 95 percent of those inmates currently in state prisons will eventually be released back into society. “So then the question goes. Where do you start? What do you do?”

The National Institute of Correction says evidence-based practice implies that “1) there is a definable outcome(s); 2) it is measurable; and 3) it is defined according to practical realities (recidivism, victim satisfaction, etc.).”

The first goal of the plan is to adequately staff state correctional facilities with high-quality professionals working in the security, medical and other non-security areas.

This portion of the plan focuses on ways to recruit, retain and grow the ADOC workforce through better compensation and improved workplace conditions.

During the recent Legislative Session, lawmakers approved an increase in salaries for correctional officers. HB468 sponsored by Rep. Chris England, D-Tuscaloosa, provides a two-step pay raise for individual employees of the Alabama Department of Corrections and expands the incentive program to include bonuses for new training achievements.

Over a year ago, ADOC commissioned a staffing study to determine personnel requirements.

“They basically came back and said that we need somewhere between 1,800 and 2,000 more correctional officers to staff our facilities,” Dunn said. “And so, that report was then given to the court, and the court adopted in effect our staffing study to establish the requirement.”

ADOC is now in the process of streamlining hiring as well as creating a new classification for correctional officers that will lead to better recruitment.

“We’ve created a new entry-level position. It’s called the basic correctional officer,” Dunn said. “Before, you would enter the department as a correctional officer trainee and then go to the academy. Instead of trying to change that whole system, we just backed up, and we said we’ll bring you in as a basic correctional officer and will give you six weeks of training, which incidentally is more training than the Bureau of Prisons in a majority of other states. And then you can go into the facility and start working.”

Dunn said he understands the challenges but believes that by having a concrete plan with clear milestones, ADOC will achieve its goals.

“The DOJ focuses on the impact on the inmates and that is certainly where the Constitutional issues reside,” Dunn said. “But I am equally focused on the environment my staff is working in. No one has a problem with the statement that the conditions of where you work matter to how much you enjoy your job and how well you do at your job.”

Ivey’s prison infrastructure plan calls for three new regional facilities, one of which will have additional space for centralized health and mental health care facilities for special needs populations. Each new facility will also include space for educational and vocational training programs.

Under the current system, Alabama’s correctional operations are spread throughout the state. Under Ivey’s plan, they will be centralized, allowing for enhanced security through updated structures and the implementation of current technology resources.

He said it’s time to move beyond the politics of where prisons are located toward what is best for inmates, correctional officers and the state.

The third leg of ADOC’s strategic plan is to improve the delivery of research and evidence-based rehabilitative programs for inmates.

“We don’t just educate them for the sake of educating them. We educate them so that they can rehabilitate themselves and be productive citizens,” Dunn said. “We don’t give them drug treatment just because we’re empathetic — we are — but the goal is to get them clean, so they can manage their life and get out, and then we don’t teach them a trade just to teach them a trade.”

This area of the plan will rely heavily on the recently published Male Inmate Risk Reduction Plan and Women’s Services Strategic Plan, which details a strategy that will create an environment supportive of positive offender change and rehabilitation.

ADOC is currently piloting a similar program for male inmates.

“Once we have determined that that pilot for the males is working and working the way we want it to, we’ll begin to replicate it around the state,” Dunn said.”With the idea of when we walk into the new facility, we’re just taking that with us when we get inside.”

The plan calls for improving the ADOC operating culture through the development and implementation of a strategic communication plan, the continued expansion of a holistic leadership development program and added staff wellness policies, procedures, programs and infrastructure.

“Your culture is those shared beliefs and values and behaviors in an institution,” Dunn said. “There are some very rich, interesting things about DOC culture. It’s not unlike military culture.”

But Dunn admits there are some areas where a toxic culture has taken root.

“Admittedly, and the DOJ report addresses this; we’ve got some toxic areas in our system that affect and negatively impact our culture,” Dunn said. “What we’re trying to do is, number one, identify what our values are. Model those, starting with me, through the executive team and reinforce those.”

Over the last several months, ADOC aided by hundreds of law enforcement officers has carried out widespread predawn raids to confiscate contraband and send a signal that the current lawlessness will not be tolerated.

While Dunn said these raids are a necessary measure, only a long-term strategy will cure what ails the troubled prison system.

“We have experienced challenging times for many years, but this strategic plan gives us a clear blueprint to build a better ADOC,” Dunn said.

Dunn was appointed commissioner of the Alabama Department of Corrections on April 1, 2015, after serving 28 years in the United States Air Force and retiring at the rank of Colonel.