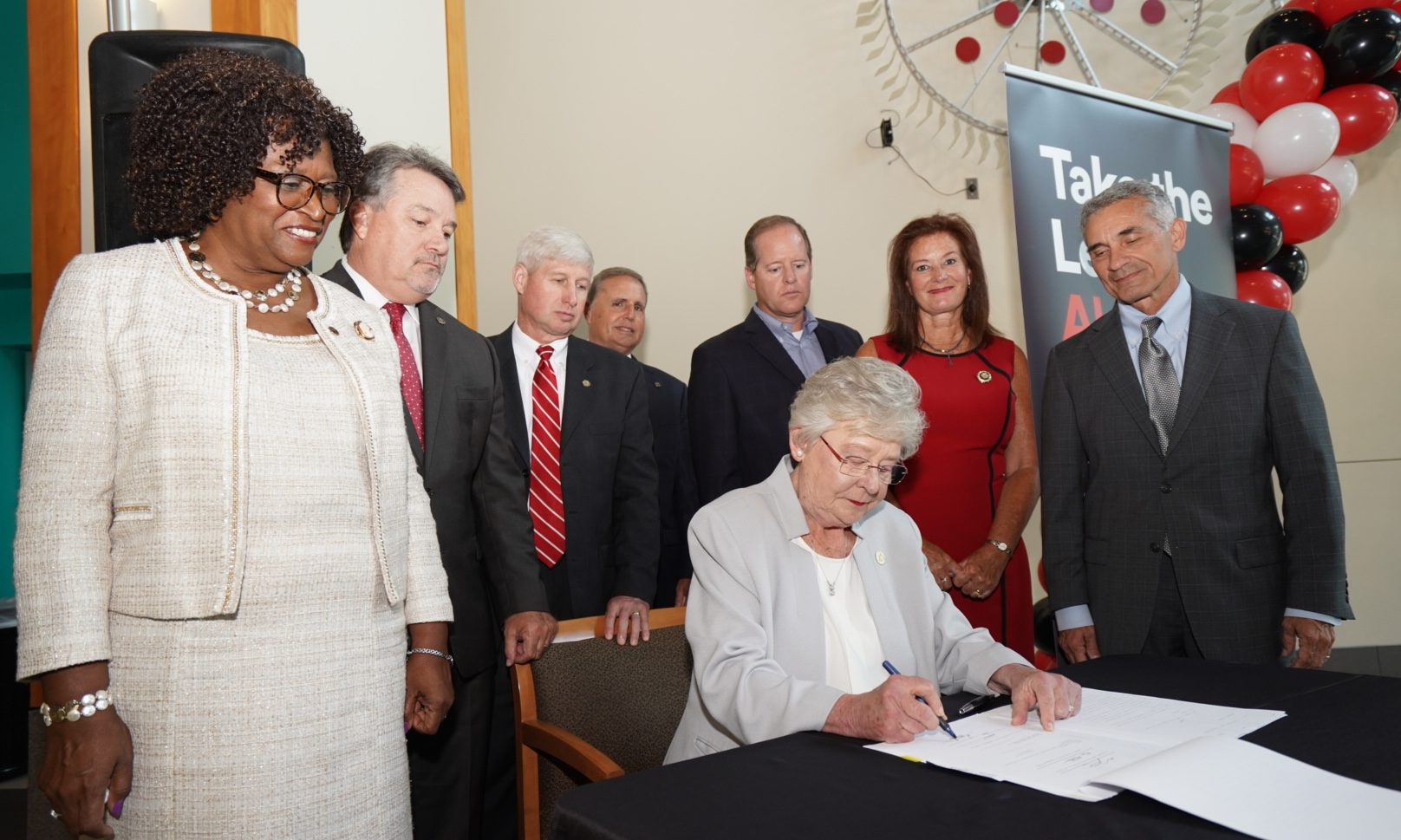 Monday, Alabama Gov. Kay Ivey announced her “Take the Lead, Alabama” initiative at a press conference. Alongside legislators, the governor expressed her steadfast commitment to education reform in the state of Alabama.

“Since taking office, I’ve made improving education a top priority,” Gov. Ivey said. “As a former teacher, I recognize that strong leadership and a strong plan are necessary components to improving our education system. Through my ‘Take the Lead, Alabama’ initiative, we will shake up how we do things in our state to improve educational outcomes for students in every region. I encourage every Alabamian to join me in supporting this constitutional amendment, so that Alabama can take the lead!”

The Alabama Legislature recently passed Senate Bill 397 during the 2019 Regular Legislative Session. The constitutional amendment would replace Alabama’s current, elected State Board of Education with a governor-appointed Alabama Commission on Elementary and Secondary Education.

If approved by the people of Alabama it would arguably make Ivey the most powerful governor in the modern history of the state, certainly in the field of education.

The constitutional amendment will also establish the Secretary of Elementary and Secondary Education replacing the old state school superintendent. The new Secretary will be appointed by the commission. The governor’s appointments and the secretary must be confirmed by the Senate and will be required to have the geographical, gender and racial diversity that reflects our public-school systems here in Alabama.

“I want to thank Governor Ivey for taking the lead on this. No issue is more important in Alabama than education,” Senator Marsh said. “Next March, the voters will have the chance to send a strong message that we want a school board that is capable of making decisions in the best interests of our schools, teachers and students.”

Proponents of the massive change in the education structure like to point out that the top states in The National Assessment of Educational Progress (NAEP): Massachusetts, New Hampshire, New Jersey, Virginia, Florida, Indiana, Vermont, South Dakota, and Iowa all have governor-appointed boards.

“I believe students learn best when innovation is allowed to take place in the classroom,” Marsh continued. “If we have a school board that is made up of qualified individuals who are held accountable, we can increase local control, reduce the amount of time the Legislature spends on education reform and put the power back where it belongs, in the hands of educators.”

This constitutional amendment will establish the commission’s functions, as provided by general law, and will also specifically include emphasis on implementing a consistent course of study standards, comprehensive teacher certification and professional development programs, and an accountability and assessment program.

If the voters approve this constitutional amendment, the governor will then appoint a diverse team of current and former educators, administrators and other officials from across the state to consult with and make recommendations to the commission on a regular basis, relating to the operations and functions of the Alabama Department of Elementary and Secondary Education.

“I applaud the Legislature for giving final passage to a law that will guarantee the Legislature’s minority party a strong voice during the appointment process,” Gov. Ivey said. “Bipartisanship has and will continue to be a major focus of my administration.”

“This legislation reaffirms that in order for us to make substantial and positive changes to our state’s education system, we must all work together,” Ivey added. “By doing so, we will undoubtedly create a better future for our students.”

Alabama is one of only six states with an elected school board appointing a chief state school officer. All of Alabama’s neighboring states have governor-appointed school boards.

Ivey and the legislature are asking Alabama voters to voluntarily surrender tremendous power to the governor and the Senate. Presently, voters decide who sits on the state Board of Education. Ivey and Marsh believe that the people will voluntarily give up this power in the hope that it will lead to improved educational performance.

U.S. News and World Report recently ranked Alabama dead last among the states for education. Alabama elementary school students tested 50th in math and 46th in reading. Less than half of Alabama fourth graders were competent in the two subjects in recent NAEP testing. Only 33 percent of public school children were competent in science.

Voters will get to decide when they vote on the constitutional amendment on March 3.