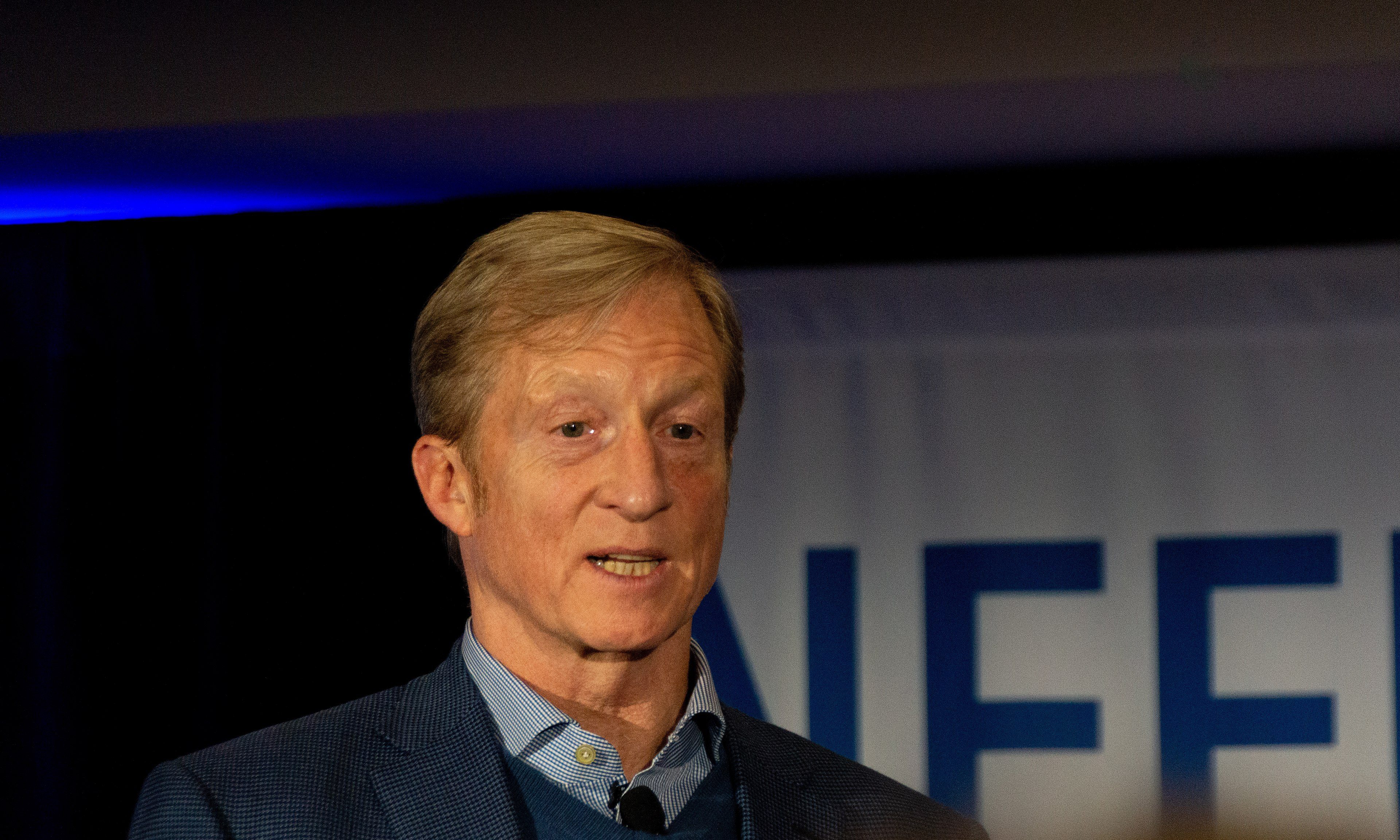 Tuesday, billionaire hedge fund manager Tom Steyer announced that he is running for the Democratic nomination for President of the United States.

In 2015 sixteen Republican leaders including: governors, senators, congressmen, a doctor/writer, and a businesswoman announced that they were running for President of the United States. Then in the Summer of 2015 a popular billionaire announced that he was running for President and he went on to wipe the crowded field full of professional politicians to become the Republican nominee. Donald J. Trump then went on to beat former Secretary of State Hillary Clinton (D) in an upset.

Is Tom Steyer the Democrats’ Donald J. Trump? Like Trump, he is a billionaire and like Trump he steps in to a divided field of candidates that include: senators, members of Congress, governors, mayors, a spiritual author/philanthropist, and a businessman. Like Trump he enters the field in the summer just six months before the primaries and like Trump he has talked about running for years but waffled on whether or not to do it. As recently as January, Steyer announced that he would not be a candidate. Like Trump he is campaigning against the political establishment and the donor class.

Steyer has an estimated net worth of $1.62 billion and according to campaign spokesman Alberto Lammers Steyer will unleash at least a $100 million of that vast fortune on winning the Democratic nomination for President.

“If we can reduce the influence of corporate money in our democracy, and start to address the devastating impacts of climate change, we can unlock the full potential of the American people and finally solve the many challenges facing our country,” Steyer said in a statement.

“The other Democratic candidates for President have many great ideas that will absolutely move our country forward, but we won’t be able to get any of those done until we end the hostile corporate takeover of our democracy,” Steyer said.

Steyer is a self-made billionaire. He and his wife Kathryn Taylor, known as “Kat,” were among the first to sign the Giving Pledge: a commitment to give away the bulk of their personal fortune during their lifetimes.

In 2012 he stepped down from day to day management of his hedge fund empire, choosing to devote himself fulltime to his charitable and political pursuits. At its peak, Steyer’s firm managed $36 billion, much of it for foundations and universities.

In 2017, Steyer founded, Need to Impeach, a PAC demanding that Donald Trump be impeached.

Steyer was very active in the 2018 midterm elections, spending over $100 million to elect a Democratic majority in the U.S. House of Representatives.

In addition to his own money, Steyer has both of those organizations’ contact lists, which contains millions of email addresses of Democratic donors.

“We need the broadest democracy possible to take back our government from the corporations that now control it and have stolen the rights of everyday Americans,” Steyer said. “Only a broad-based grassroots movement can restore power, fairness and prosperity to the people.”

Steyer has laid out his vision for putting the people in charge of our democracy with a “21st century bill of rights” — a new set of five rights — that every American must have.

Steyer has been very active in the environmentalist movement. He helped protect California’s landmark clean-air laws, and he followed that up with wins for clean energy in Michigan and Nevada.

Another charitable project is Beneficial State Bank, which since 2007 has loaned money affordably to working people, small businesses and nonprofit community projects shut out by regular banks. Tom and Kat have given more than $120 million to building the bank, which reinvests any profits back into the communities it serves.

Tom Steyer grew up in New York City, the youngest of three brothers. His father, Roy Steyer, was an attorney and World War II veteran. His father served in the Navy and served on the legal team that prosecuted Nazi war criminals at Nuremberg. His mother, Marnie, was a journalist and teacher who taught in the city schools and volunteered to tutor prisoners in a large city jail.

Steyer graduated from Yale and earned his MBA at Stanford. Steyer moved to San Francisco in 1986 and started his own small investment firm. Backed by two seasoned investors, Steyer started managing the new fund, which began with $9 million in investments. Over the years, Tom achieved double-digit returns for his investors.

Tom Steyer is 62. He and Kat have four grown children.

Sens. Elizabeth Warren and Bernie Sanders have both attacked Steyer.

Sanders told MSNBC that he is “a bit tired of seeing billionaires trying to buy political power.”

“The Democratic primary shouldn’t be decided by billionaires, whether they’re funding Super PACs or funding themselves,” Warren’s campaign said in a fundraising email. “If you’re a billionaire, you can already buy yourself a mansion, a private island and even a yacht to get yourself there.”

Congressman Eric Swalwell, D-California, dropped out of the race on Tuesday; so Tom Steyer’s entry brings the number of democratic candidates in the field back to 24.