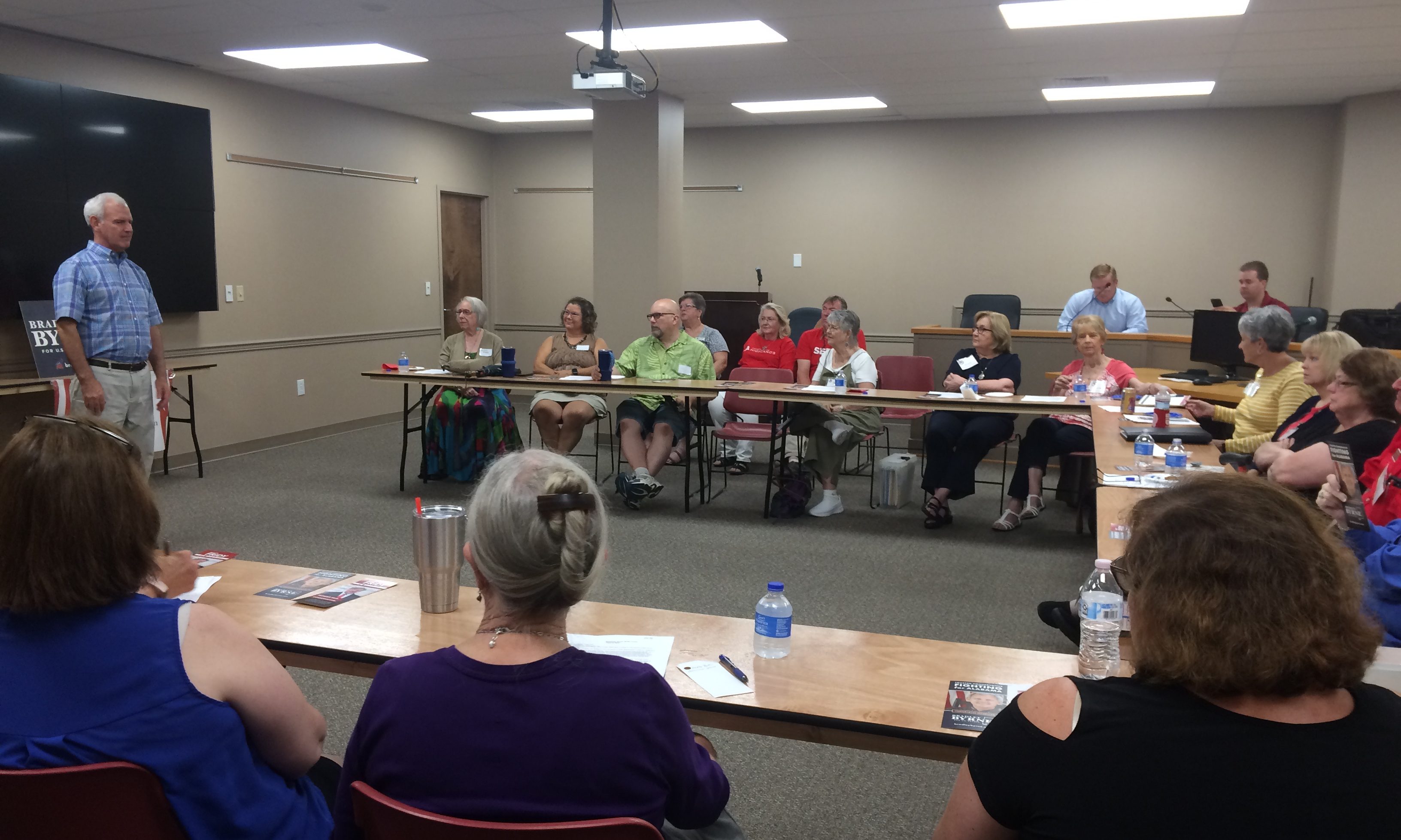 Byrne said the fight between Republicans and Democrats in Washington is not just a fight over policies, but a fight over the fundamental values of this country.

“Their values are not our values,” Byrne said. “They aren’t American values.”

“The Judeo-Christian value system that is the bedrock of America,” Byrne said. “They find that offensive to them.”

“They voted to repeal the Religious Freedom Restoration Act,” Byrne said. “They view religious liberty as a secondary right, if it is a right at all.”

“They are in a different culture than the one we live in,” Byrne said. “We have a tradition in my family every Fourth of July to read the Declaration aloud.”

“Governments are instituted to protect the rights of men, and by that the founders meant men and women,” Byrne said. “My job is to make sure that government protects those rights.”

Byrne said democrats are rushing to embrace Medicare for all.

“I am just a few months from 65, so this is something I really am interested in,” Byrne said. “The people who are the trustees for the Medicare Trust Fund tells us that the fund only has a few years left, but instead of shoring it up to protect it for those Americans who have paid into the system for all of those years, they want to open it up to everyone. That will cost between $30 to $35 trillion. If you are on a private health insurance plan, you will be forced off of that plan. They think the government knows better than you or I how to run our lives.”

“This room feels pretty good,” Byrne said. “That is because of air conditioning, which comes from electricity from Alabama Power. They generate it by burning coal or natural gas. I kind of like this power.”

Byrne said that the democrats want to take away power generated from coal or gas. The deans of two of the state engineering schools were up in Washington. “Can we get America off of coal and gas in ten years?” Byrne asked them. One said that you can, “but you are going to be cold in the winter, hot in the summer, and you are going to walk everywhere. And there won’t be any cows.”

“This is crazy,” Byrne said, “But they are not unserious about this.”

“They also don’t value patriotism,” Byrne said. “We are debating whether it is OK whether or not to show the Betsy Ross flag. It has never been controversial. The Betsy Ross flag was flown at Barack Obama’s first inauguration, but now it is controversial because Colin Kaepernick says so. We all need to boycott all Nike products.”

“They also don’t value our men and women in uniform,” Byrne said. “We had a vote last week to give them a four percent raise. All the republicans were voting for and the vast majority of democrats voting against.”

“We made a mistake in Alabama in 2017,” Byrne said. “We elected somebody to the Senate who does not share our values.”

“I want a senator who represents the people of Alabama,” Byrne said. “My job is not to be Chuck Schumer’s best friend.”

“I am a sixth-generation Alabamian,” Byrne said. “I live just a few miles away from where my ancestors settled in Baldwin County in the 1780s. The Byrnes have not gone far because we love it here.”

“I am ready to fight for our values,” Byrne said.

Byrne said he has a record as a fighter, citing when former Gov. Bob Riley asked him to run the state’s Two Year College System.

Byrne said the two-year college system at the time “was at the heart of the corruption in Alabama’s education system. And it was run by the AEA. The Alabama Education System was a much different one than the one we have today. They were controlled by Paul Hubbert and every day was a fight. I also had to cut $75 million from the system. I cleaned up a swamp.”

“Our country’s economy has not been this good since 1969, if it was that good then,” Byrne said. “We are respected abroad, not liked in some quarters, but we are respected.”

“I like being in the fight,” Byrne said. “I need your support and your vote. I have to earn it. I am going to work as hard as possible. It is critical to the country. We made a mistake in 2017. We are not making that mistake in 2020.”

The Republican Primary is March 3.