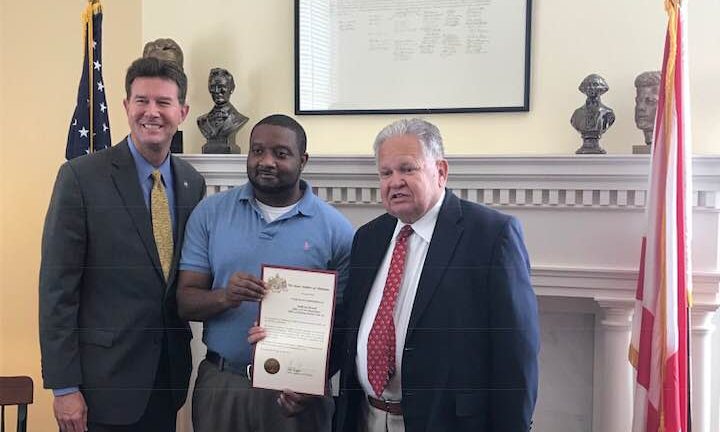 The State Auditor is responsible for making sure all state agencies have possession or knowledge of the state property under their care. The office of the State Auditor performs a routine audit every two years of Alabama state agencies for all items costing $500.00 or more.
Secretary of State’s office property Manager Anthony Powell was recognized for his role in attaining a perfect audit in a certificate of commendation from Auditor Ziegler.

“Property managers may strive for good work, but few attain a perfect audit. I commend Anthony Powell for doing a super job of ensuring that all property is accounted for!” said Secretary of State John H. Merrill.

The Secretary of State’s three categories for property inventory are general agency, voter registration, and the Office of Helping America Vote Act.

“This is the first time in more than a decade that all three divisions of the Secretary of State’s office have been recognized as having completed a perfect audit!” said Merrill. “We commend Anthony Powell and all team members responsible for the inventory of this equipment. We are excited to be recognized by the State Auditor and his team for accomplishing the expected goal of a perfect audit!”

Both Zeigler and Merrill are term-limited from seeking another term in the current position.
Merrill is a candidate for the U.S. Senate seat currently held by Sen. Doug Jones. Zeigler has formed an official exploratory committee to explore running for the same office.

Zeigler is a retired elder care attorney and previously served on the Alabama Public Service Commission.

Both are former Student Government Association presidents at the University of Alabama.