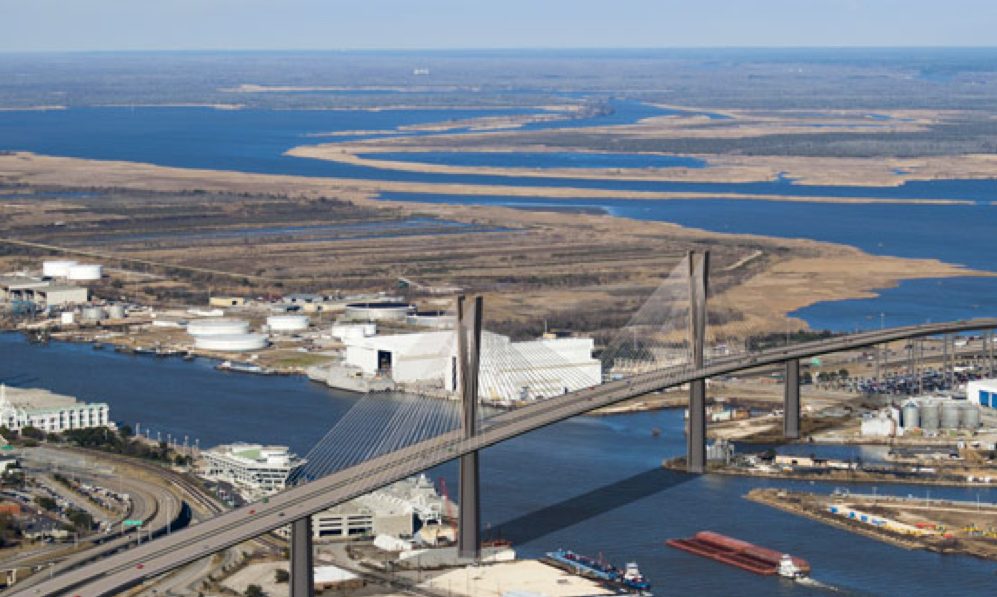 A bad month for the governor’s Mobile River bridge proposal got even worse on Thursday, Aug. 1, when the Legislature’s contract review committee placed a hold on the Alabama Department of Transportation’s contract with Birmingham law firm Maynard, Cooper and Gale.

The panel is tasked with reviewing all state contracts. The $750,000 contract is for legal work having to do with ALDOT’s plan to build a $2.1 billion bridge over the Mobile River and replace the existing Bayway. ALDOT wants to build a massive bridge with 215 feet of vertical clearance over the bridge. They would also replace the existing Bayway with a taller wider Bayway. ALDOT claims this is necessary to lift the Bayway out of the 100-year storm surge of a theoretical future super hurricane. Under the plan, all of this would be paid for by tolling the new bridge as well as the existing Wallace Tunnels, which take motorists under the river.

ALDOT plans to sign a public, private partnerships contract with one of three private conglomerates to build the enormously expensive new bridge and give them the power to toll the motorists for the next 55 years to recoup their investment and return a profit for their investors. Gov. Kay Ivey has declared the area of the Mobile River bridge project a federal Opportunity Zone, potentially giving the investors in the project hundreds of millions of dollars in tax credits and deferments. Opportunity Zones were created in the Republican Tax Cuts and Jobs Act of 2017 and are designed to help communities rise out of chronic poverty.

Maynard, Cooper and Gale specialize in P3s. The hold on the contract is 45 days, the most the law will allow.

Forty-three thousand, six hundred and seventy-nine residents have joined a Facebook group led by State Auditor Jim Zeigler opposing the plan to toll motorists, many of whom commute back and forth to work on I-10.

Wednesday, Zeigler sent a letter to Ivey urging her to shelve the project.

“A new potential source of funding for a Mobile Bayway bridge emerged Tuesday,” Zeigler wrote. “A U.S. Senate committee advanced the $287 billion infrastructure bill. It is aimed at projects for disaster resilience and traffic congestion. The Mobile Bayway bridge qualifies under both criteria.”

“I ask you to hit the pause button on ALDOT’s plan to put a toll on the I-10 Bayway,” Zeigler said. “You have an opportunity to be a real folk hero to tens of thousands in Coastal Alabama. If you would pause the ALDOT toll plan and direct them to look at the $287 billion infrastructure bill and other options, a cry of ‘Hallelujah’ would go up from our Gulf Coast.”

“Please envision a family whose budget is tight – just barely in balance,” Zeigler wrote. “The family lives on one side of Mobile Bay, and the breadwinner works on the other side. It will cost this family either $15 a day just to commute to work or $90 a month per car. That is $1,080 a year per car. If you take a family budget that is already tight and add an expense of $1,080 a year per car, the family is in trouble.”

“The 45-day hold is the most this panel can do, but it is a first small step to getting the governor to halt the toll plan,” Zeigler said.

On Tuesday, Fairhope Mayor Karin Wolff Wilson announced her opposition to the plan.

“I’m 100% against a toll to build this bridge whatever the fee.” Mayor Wilson wrote in an article on her Facebook page. “The State should have invested the billion+ dollar BP settlement into the two counties that suffered the most instead of taking this money for its own operating budget. Why punish the tourists and hardworking citizens of Mobile and Baldwin County to make up the shortfall due to poor planning and budgeting?”

“The critical need for a new bridge has been discussed for over a decade,” Wilson said. “To react as though building it now is an overnight emergency is absurd. It’s the perfect example of government getting away with zero accountability.”

Despite the overwhelming community opposition to this project, ALDOT and the governor’s office continues to maintain that the bridge project is necessary.

On Wednesday, the Governor’s Press Secretary Gina Maiola told the Alabama Political Reporter, “Governor Ivey knows that it is vital we move the Mobile River Bridge and Bayway project forward for the reasons of commerce, efficiency and safety. The new Mobile River Bridge will have more than 215 feet of vertical clearance to carry I-10 across the Mobile Channel, permitting all types of maritime traffic in the Port of Mobile.

(Original reporting by WSFA Channel 12 and FOX Channel 10 contributed to this report.)