Three pictures of a fully naked man with his face cropped out were sent to media outlets last week by a group opposing the building of the I-10 toll bridge connecting Mobile and Baldwin counties.

The email was sent from a Gmail account under the name of “Ziggy Army,” which may be a reference to state auditor Jim Ziegler, the most visible anti-toll bridge opponent. The email contained photos of a nude man and alleged that the man in the photos had used state-owned WiFi to post the pics on a gay dating website.

There is no evidence that the photos are authentic, that they were posted by any state employee or that they were posted using state property. However, if, as the email claims, the photos were obtained by state employees illegally combing the hard drives of state-owned computers and then disseminating that information, that would be a felony in Alabama. 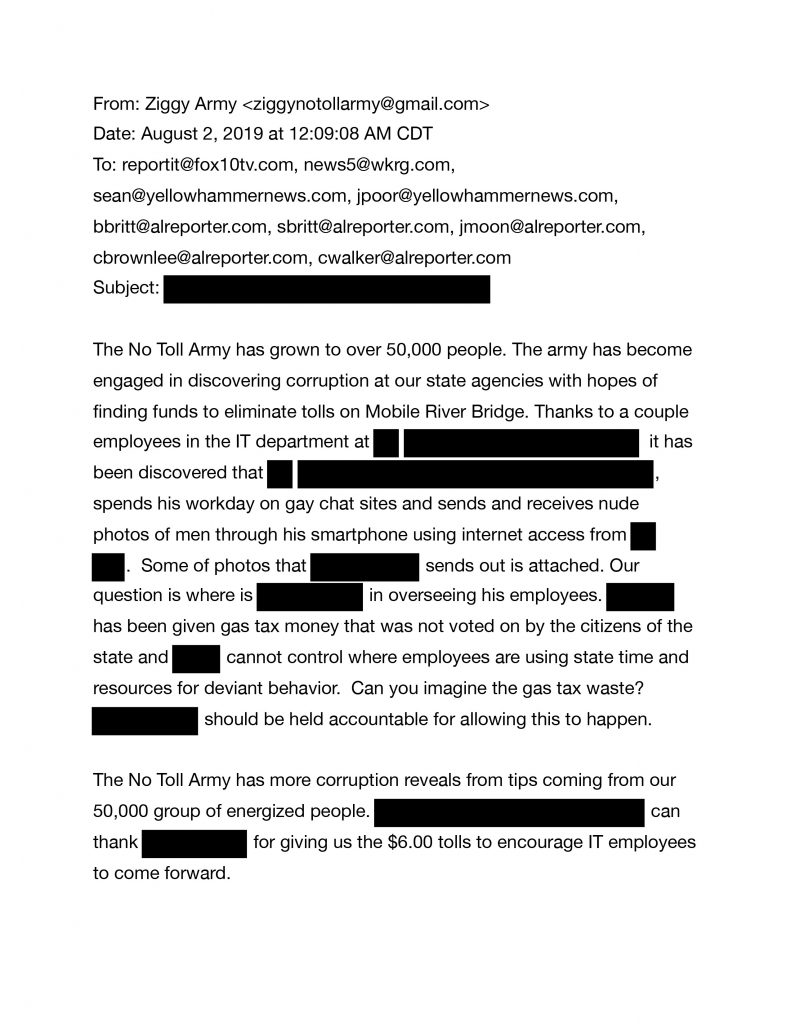 Attempts to reach Ziegler were unsuccessful. The Facebook group for which he serves as an administrator, “Block the Mobile Bayway Toll,” has not posted or commented about the email.

The email is the latest in what has become at times an unruly and mean-spirited protest of a proposed toll bridge over the Mobile Bay. State officials say the tolls are necessary to pay for the project. Opponents contend that the project’s costs are absurd and that a high toll (as much as $9 for some vehicles) will cause financial hardship on many families.

The goal of Ziggy’s Army, according to the email, is to discover corruption in state agencies in order to force the state to find an alternative to paying for the bridge and eliminate the toll.

“The No Toll Army has grown to over 50,000 people,” the email reads. “The army has become engaged in discovering corruption at our state agencies with hopes of finding funds to eliminate tolls on Mobile River Bridge.”

The email implies that Ziggy Army will continue to publish alleged corruption until the state finds another way to fund the I-10 bridge.

The “Block the Mobile Bayway Toll” group had 44,336 followers as of last weekend.

APR has chosen to keep the state office and the name of the man pictured in the email private because the allegations being made by Ziggy Army are unproven.

The group claims that it obtained the photos from employees at the agency’s IT department.

It claims the man pictured is using his personal phone connected to state wi-fi to send pictures of himself to others on a gay site. Ziggy Army offers no proof, only accusations.

“The army has become engaged in discovering corruption at our state agencies with hopes of finding funds to eliminate tolls on Mobile River Bridge,” according to the email sent to APR and other news outlets.

While the agency isn’t directly tied to the proposed toll bridge, the group seems to take issue with the fact that it is receiving gas tax funds.

“The [agency] has been given gas tax money that was not voted on by the citizens of the state and [name withheld] cannot control where employees are using state time and resources for deviant behavior.”

Ziggy Army says it received the files from, “a couple employees in the IT department at the [agency].”

No evidence points to members of the Block the Mobile Bayway Toll.

In the past, Ziegler has cautioned members of the Block the Mobile Bayway Toll Facebook group about threatening and bullying posts.

However, Ziegler responded to a previous warning about the activities of some in the group by saying he didn’t start the Facebook page and was not responsible for its members’ actions. He also said he couldn’t control what members posted.

The group as a whole has been engaged in a direct democracy campaign to voice its opposition to the I-10 toll bridge. It has been a useful tool to draw attention from lawmakers and candidates from both parties.

The email ends by threatening to reveal what it calls, “more corruption.”

“The No Toll Army has more corruption reveals from tips coming from our 50,000 group of energized people,” claims Ziggy Army.