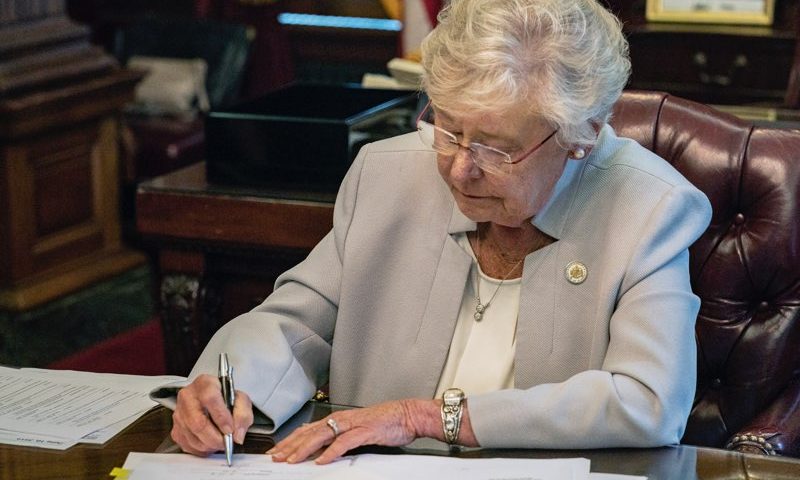 For the past 25 years, serious efforts have been underway to design and eventually build a new bridge along Interstate 10 that runs through Mobile and Baldwin counties.  Once completed, this bridge would relieve the growing congestion along this busy corridor that runs from Florida to California.

Building a bridge over a major shipping channel with an active waterfront, as is the case in downtown Mobile, was always going to be a challenge even when the price tag was projected to be $850 million.  In recent months, the effort to consider a toll to help pay for this project – where the price tag has climbed to more than $2 billion – has only added to the challenge.

Most people agree a new bridge is necessary. However, the most significant obstacle has always been how to pay for it. As governor, I am committed to looking at all reasonable solutions to move this project forward.

In February, I told President Trump that I strongly support his major new infrastructure package. However, we all know that waiting on Washington to agree on anything isn’t a realistic option.  Besides, if additional federal funding comes, there would be provisions to lower the toll which, based on the current proposal, would be about $2.25 per vehicle for those who use the bridge on a regular basis.

Tolls have been used since the 1920s to connect Alabama’s coastal counties.  The old Cochrane Bridge had a $1 per car toll.  And in 1941, a toll plaza for the Bankhead Tunnel was installed when it opened, charging motorists 25 cents per car.

Almost one million vehicles traveled through the Bankhead Tunnel during its first year of use.  This toll remained until the mid-1970s and would amount to $4.25 today if it had remained.

Thirty-two years later, when the Wallace Tunnel opened in 1973, the capacity was approximately 36,000 vehicles.

Throw in a wreck or breakdown — there were 132 crashes from June 2018 to May 2019 during peak travel times — and it is not uncommon for drivers to have delays of 75 minutes or more.

One can only imagine how long the delays and backups will be when the daily traffic count is 100,000 in the not-too-distant future.

One obvious reason for the congestion is the Wallace Tunnel and existing Bayway are only four-lanes wide.  To meet our growing needs, the Bayway needs to become an eight-lane bridge. Because of anticipated growth of the metropolitan Mobile area, there will be added roadway congestion in this already-busy area.  The plans to move Mobile Regional Airport to the Brookley Aeroplex is just one example of an already crowded area becoming even more so in years to come.

Additionally, we have been told that the existing Bayway, which was is over 40 years old, cannot be widened without being raised, requiring a new structure if we are going to use the Federal dollars we are seeking.

Since Hurricanes Ivan in 2004 and Katrina in 2005 washed away numerous roads and bridges, including some along I-10, new bridges along coastal regions are now required to meet a 100-year storm surge level.

Another key factor that has added to the cost – perhaps one of the most important – is the required height of a new Mobile River Bridge.  As you know, the State recently committed $100 million over the next decade to improving the Port of Alabama which has a $22 billion annual economic impact on our state.

And by working closely with Senator Shelby and the rest of the Alabama Congressional Delegation, efforts are already underway to ensure our port has an even greater impact in the future by being able to take the biggest cargo ships in the world.

Planning for this growth – both cargo ships and even larger cruise ships – requires the bridge to be raised from its original design of 190 feet to 215 feet. We must position our state for the next 50 to 100 years as a world leader in trade and commerce.

Some new Federal dollars are on the way

While we are grateful for this grant, it represents just six percent of the total estimated cost.

Finding the money to pay for this project – the biggest infrastructure project in our state’s history – was never going to be easy.  Be assured, we will continue to look to Washington for additional help that can make this project a reality.

“No Toll or No Bridge”

In recent weeks, some in the “No Toll or No Bridge” camp have suggested we ought to just “slow this down” and wait until after the next presidential election.

Slowing down a project that is almost a quarter century old seems unwise. The cost of doing nothing is too high and no one is suggesting it will get any cheaper if we just wait.

Like others, I am sensitive to those legitimate concerns of what a toll would do to working families, lower and middle-class citizens, small businesses, students and the elderly.

However, there are also countless individuals who would like the option of choosing a safer, less congested route across the Mobile River and Bay – even if it means that route will come with a toll.  Keep in mind, there will always be “toll-free” options for anyone who wants or needs to cross Mobile Bay for free.

To those who say the bridge can be built without a toll, I simply ask you to show us how.

To that end, I am inviting all who have different suggestions to build the bridge to a meeting that will be held on October 7th in Montgomery. Elected leaders from local, state and federal office will be given an opportunity to show us their plan and the meeting will be open to the public.

This project is too important for us to be paralyzed by misinformation and inaction. I hope we can prove that when we work together, there is no limit to what we can accomplish.