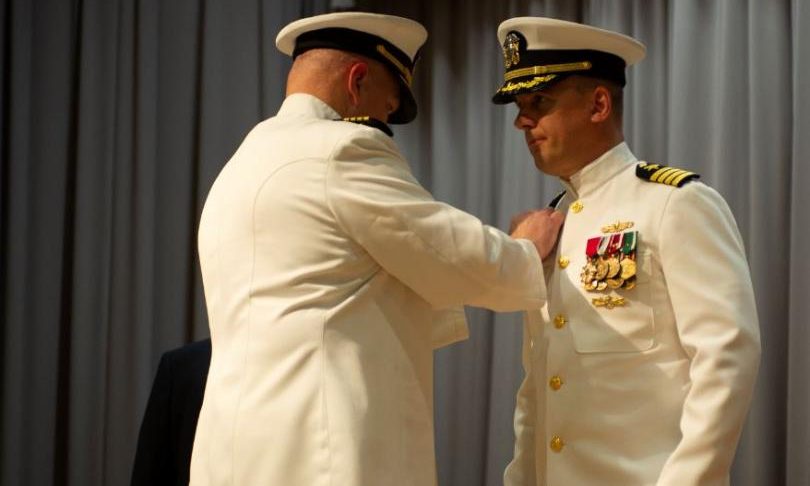 Capt. Brian D. Lawrence, left, pins the Supervisor of Shipbuilding Gulf Coast command pin to the uniform of Capt. Nathan A. Schneider. Schneider assumed command of SSGC during a change of command ceremony Aug. 12. Schneider was previously the executive officer for SSGC. Before serving as executive officer, he served as the Chief of Staff to the Deputy Assistant Secretary of the Navy for ship programs within the office of the Assistant Secretary of the Navy for Research, Development and Acquisition. (U.S. Navy photo by Mass Communication Specialist 3rd Class Kohen S. Gillis)

The Navy announced on Monday that Capt. Nathan A. Schneider has relieved Capt. Brian D. Lawrence as the Supervisor of Shipbuilding, Conversion and Repair Gulf Coast.

Schneider came to the Navy command a year ago as the executive officer for SSGC. His new position supervises private shipyards in Mississippi, Louisiana and Alabama.

“SUPSHIP Gulf Coast, thank you for welcoming me a year ago,” he said. “It’s truly a privilege for me to now have the opportunity to lead you, and I am honored to be part of the awesome SUPSHIP Gulf Coast family. I am going to give it my all to be the leader you need me to be.”

Schneider graduated from the United States Naval Academy, served one tour as a surface warfare officer and served two more ship tours before transferring to the Engineering Duty Officer career path. He attended the Naval Graduate School and after graduation worked at SUPSHIP Puget Sound and SUPSHIP Bath. He has held several other positions with the Navy.

As the torch changed hands, Mathew Sermon, executive director of the Amphibious, Auxiliary and Sealift Office, offered praise for Lawrence’s tenure as supervisor.

“All told, SSGC oversees the performance of contracts valued at more than $56 billion,” Sermon said. “You have executed this tremendous responsibility with energy, wisdom, resilience and focus, and I am grateful for your work and your commitment.”

In addition to overseeing a contract value of over $56 billion, Lawrence carried out ship maintenance and modernization, planning yard, and post-delivery oversight. He successfully led the command through 33 sea trials and 12 ship deliveries.

A retirement ceremony for Lawrence’s 29 years with the Navy was held following the change of command.

“I have spent more than nine years at SSGC,” Lawrence said. “In that time, I have watched leaders grow, and I have watched every department go to the next level. It has been an honor to serve as your CO. Thank you SUPSHIP for letting me be part of such a great organization.”