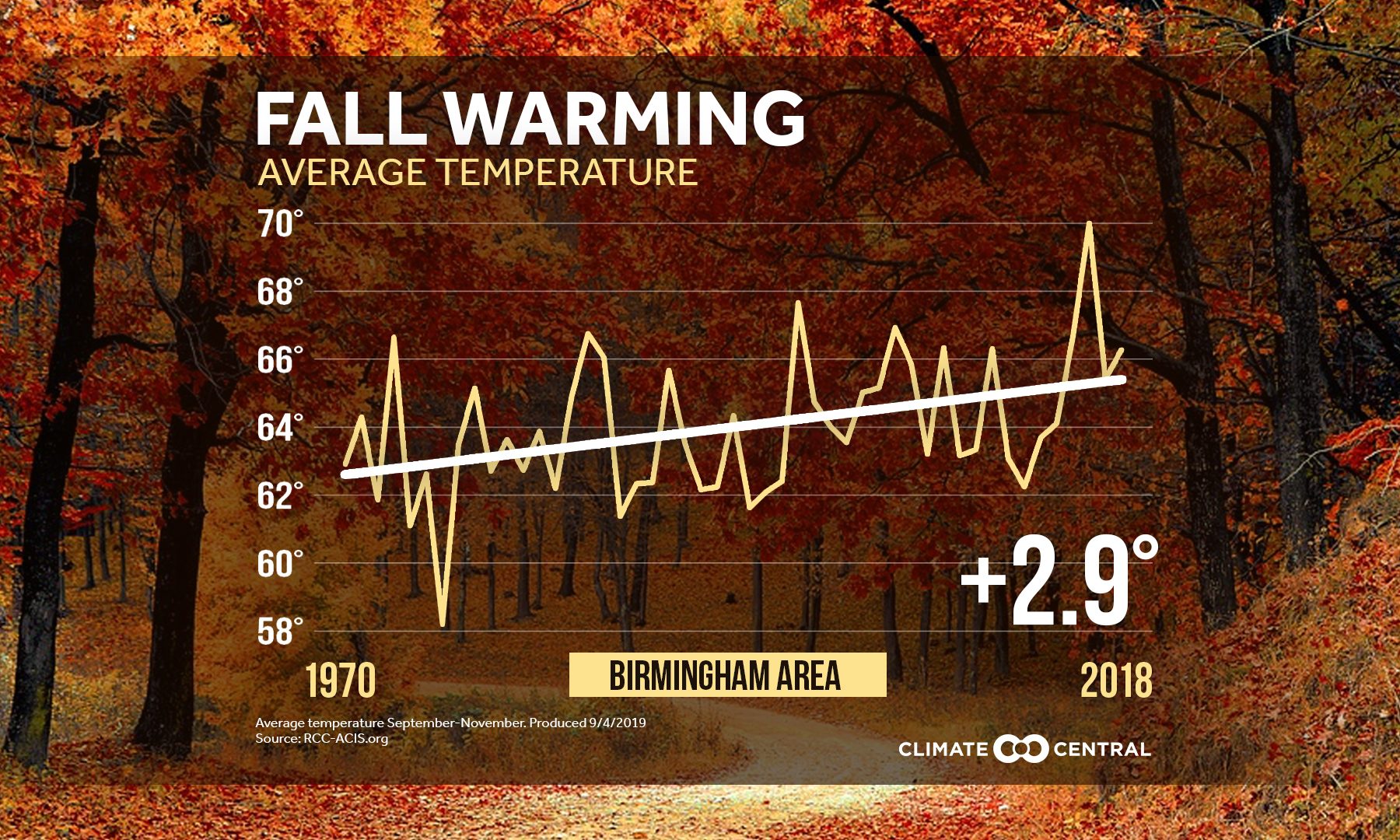 Record-breaking daily high temperatures in numerous Alabama cities on Friday come as the state, along with the rest of the nation, continues to see warmer fall temperatures.

The average fall temperature in Birmingham has risen 2.9 degrees since 1970, according to data from the National Oceanic and Atmospheric Administration and analyzed compiled by Climate Central, which compared historical temperatures recorded September through November.

The continued rise in warmer temperatures experienced worldwide is the result of human-caused climate change, according to the Intergovernmental Panel on Climate Change, the U.S. National Academy of Sciences, the American Medical Association, the American Geological Society, NASA and about 97 percent of peer-reviewed studies published in scientific journals.

Climate Central’s study found that of the 244 cities analyzed nationwide, 95 percent recorded higher fall temperatures since 1970, and more than half saw average increases of 2 degrees or more. Fall in the U.S. has warmed by an average of 2.5 degrees since 1970.

The seven highest increases were in the western U.S. Reno, Nevada saw a 7.7 increase during those years, and El Paso, Texas recorded a 5.4 degree rise.

The report notes that along with the rising fall temperatures due to human-caused climate change comes increases in energy demands for cooling longer into the fall period and worsening allergy problems.

According to the Allergy and Asthma Foundation of America, human-caused climate change, the result of burning fossil fuels like coal and oil, is a huge threat to respiratory health. The association notes a 2016 study by the U.S. Environmental Protection Agency that found that between 1995 and 2011, warmer temperatures in the U.S. have caused the pollen season to increase from between 11 to 27 days longer.

Mobile’s record high of 96 degrees set in 1911 fell when the city hit the 97 degree mark on Friday.

Huntsville’s 100 degree day on Friday just missed beating topping the 101 degree day set in 1927, according to The National Weather Service.

Jason Holmes, a meteorologist with the National Weather Service in Birmingham, told APR on Monday that the temperatures across the state will remain higher than normal through at least Thursday.

Highs will remain in the 90s through most of Alabama until Thursday, Holmes said, because of a lack of rain. Birmingham’s 93 degrees on Monday afternoon was higher than normal high of around 86, Holmes said.

“We’re continuing to have a low-end drought,” Holmes said. “We do have a weak front that’s going to come through Thursday, and the good news is that it’s going to drop our temperatures a little bit, with highs back into the 80s for the northern half of the state.”

Advertisement. Scroll to continue reading.
In this article:climate change, NASA