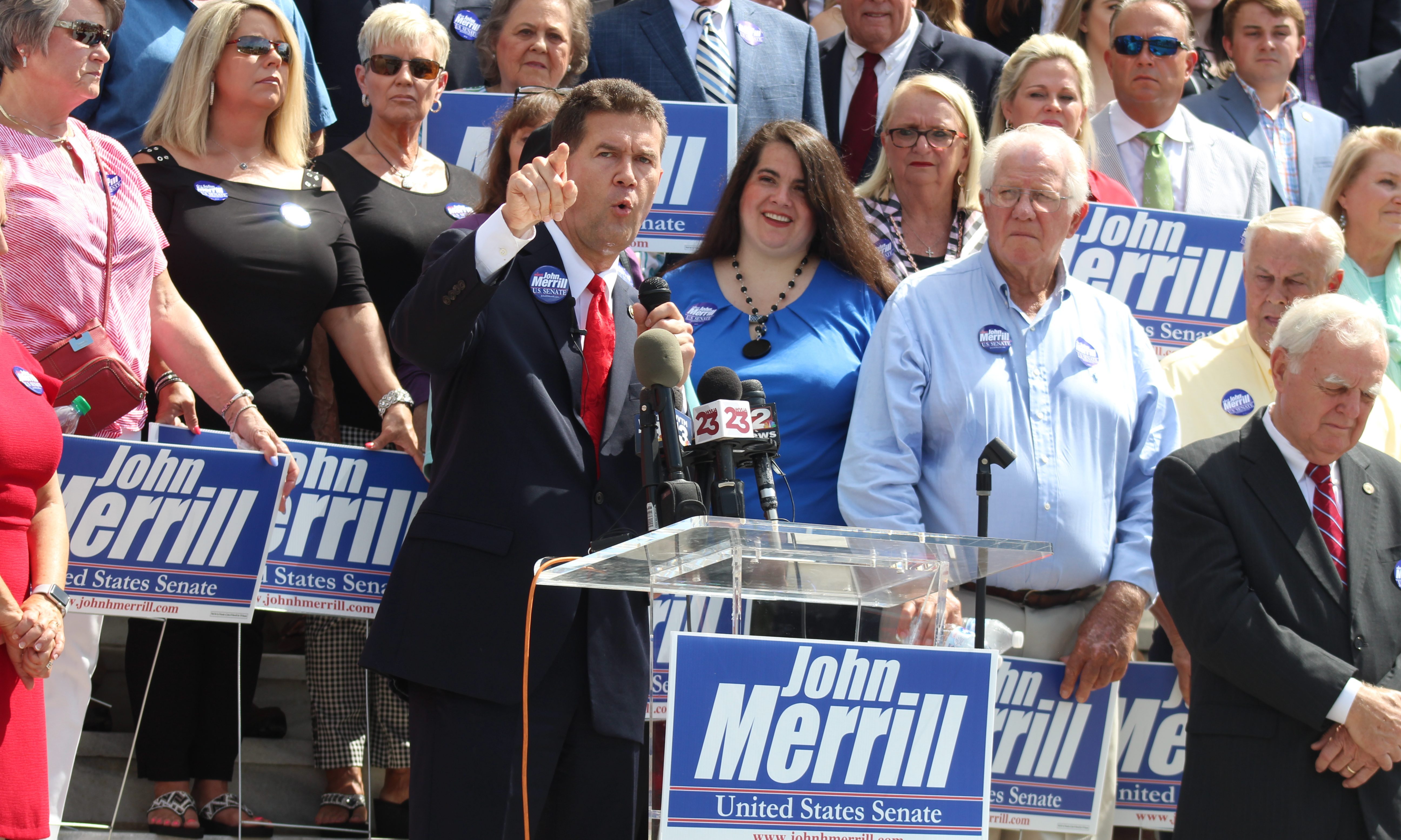 Saturday, Secretary of State John H. Merrill (R) poke to the Tennessee Valley Republican Club at their monthly meeting in Madison. Merrill is a candidate for the Republican nomination for the U.S. Senate seat currently held by Doug Jones (D).

“We have removed 800,000 because they have moved away, passed away, or been put away,” Merrill said. “I have gone to Washington three times to tell them what we have accomplished.”

Merrill said that we need to build a border wall.

Merrill said that he has been sued by the NAACP Legal Defense Fund and by the ACLU and Alabama’s voter ID law is the only one in the country that is the same today as it was when it went to the governor.
Merrill said that one of the most important jobs of a Senator is to confirm judges for the federal bench and that he supports judges who will interpret the law and not legislate from the bench.

Former State Representative Mack Buttram was present and he endorsed Merrill for Senate.

Buttram said that he and Merrill were elected in 2010 to the legislature.

“One of the first people I met was John Merrill,” Buttram said. “Our officers were across the hall from each other. I saw him everyday that I was there. We were part of the first Republican majority in 130 years.”
Buttram said that he has impressed by Merrill’s hard work and effort.

“The best thing about him is his wife, Cindy,” Buttram said.

“She has been my life partner for 34 years,” Merrill said.

Merrill said that when he became Secretary of State he evaluated how the office was being run.
“It became very clear that we had some outstanding government workers serving us and we had some that needed to be doing something else,” Merrill said.

Business filings were taking seven to nine months Merrill said. After making several changes including sending some people down the road business filings are now complete within one day.

“We have gone from 49 employees to 36 employees,” Merrill said. “We are not moving at the speed of government, but at the speed of business and we have saved you $2,819,000. I can do the same thing in Washington D.C.”

Merrill was asked if he supports term limits.
Merrill said that he has signed a term limits pledge and if term limits pass that he will honor them; but that under current rules seniority is, “Why Richard Shelby is the most powerful senator today. I am the same age as Shelby was when he went to the Senate. All of the other candidates are a decade older than me and there are a couple of candidates more than two decades older than I am.”

Merrill said that 55 of the 67 counties are rural. “We are going to establish a rural development officer who will help people solve their issue at a municipal or county level.”

Merrill promised that “if you have an appointment with me and you are going to meet with me,” and not a staffer when constituents visit Washington.

“I am the only person in this race who has been to all 67 counties and I have done that for seven years.” Merrill said.

Merrill said that Tommy Tuberville was one of those new voters that he has registered since he was Secretary of State, “He registered on March 29, 2019.”

“I don’t think we need a Federal Department of Education,” Merrill answered a vote. Education is “Best dealt with at the local school level.”

Merrill was asked about former Congressman Beto O’Roarke’s statement that he would take away the tax exempt status that did not support gay marriage.

“He does not fully understand what the second amendment means” and he think she “can interpret what Churches do. He needs to go back to Texas and get a real job and he would understand better.”

“I am for the Fair Tax,” Merrill said.

“We need your help to make it happen,” Merrill said. “Madison county has been a friend in all my campaigns.”

Tennessee Valley Republican Club Chairman Chris Horn said that Merrill has always been a friend to this club, even when he wasn’t running for anything.

The Tennessee Valley Republican Club meets at 8:oo a.m. on the Second Saturday of each month.

The bill would ban puberty blocking and hormone treatments in minors, despite doctors warning such a ban could risk children's lives.