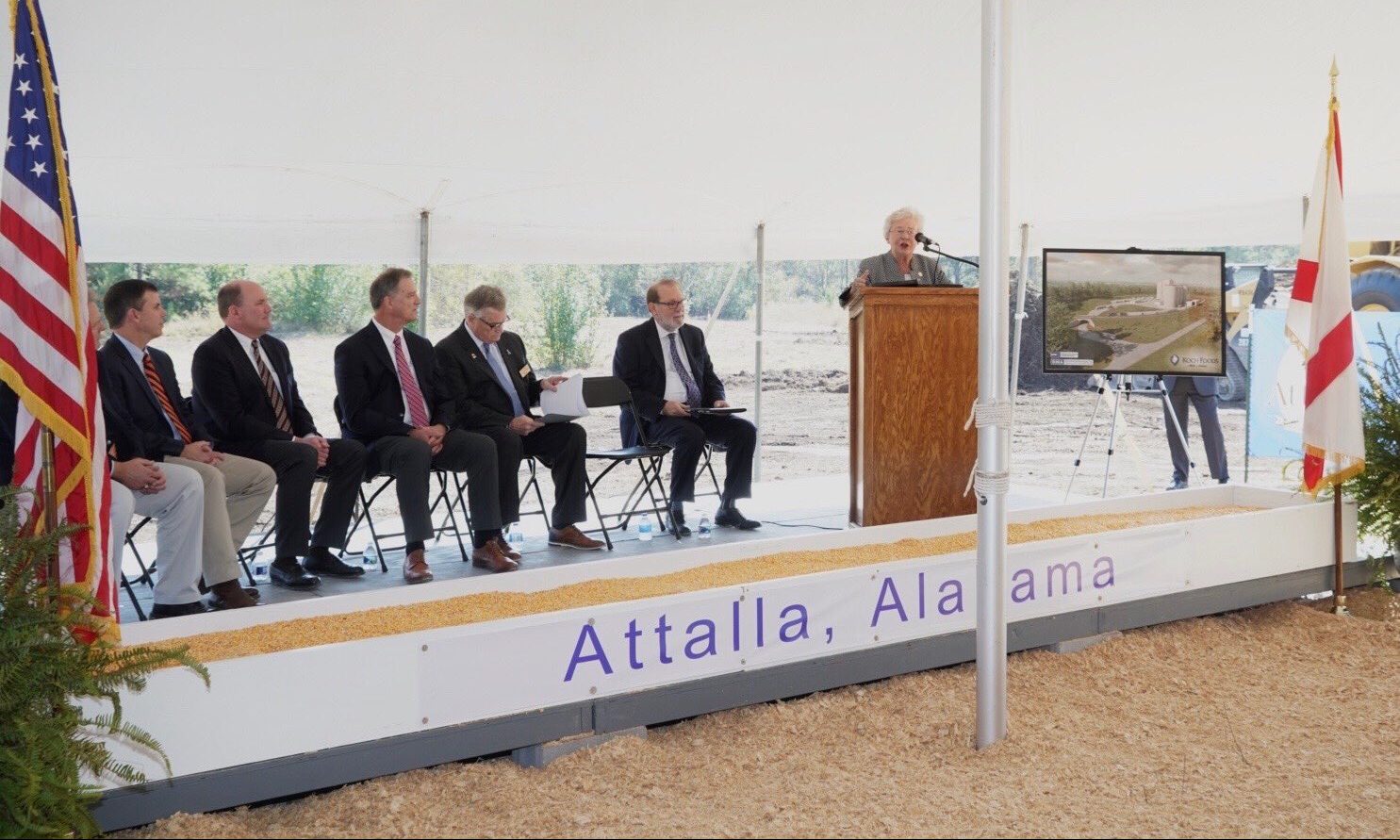 Tuesday, Alabama Governor Kay Ivey (R) was on hand for the groundbreaking of a new Koch Foods grain storage and distribution facility at the City of Attalla in Etowah County.

“What an exciting day to be here for the groundbreaking for Koch Foods’ state of the art grain storage facility,” Gov. Ivey said. “This will be a great addition to our economy.”

“Koch Foods already has significant operations in Alabama, and this new investment will magnify the company’s economic impact on the state,” Governor Ivey said. “This project adds a robust new dimension to the industrial sector in the state and permits us to strengthen our longstanding relationship with a major employer.”

Ivey said that one of the proudest accomplishments of her administration is the record low unemployment, which just hit a new record low of 3.0 percent in September, but that, “Would never have been possible without first rate companies like Koch Foods choosing to expand in the state of Alabama. Thank you for investing in the great state of Alabama.”

“We are very excited about building one of the most technologically innovative grain storage facilities in the world,” said Matthew Herman, Koch Senior Vice President of Fresh Operations. “We continue to expand our business in Alabama and are thankful for the cooperative environment between business and government in the state to get things accomplished.”

Herman thanked the Mayor of Attalla and his team, “They have worked diligently every day since I made that phone call.”

Herman said that their Gadsden processing plant has just been expanded, adding 200 new jobs bringing the total employment there to 915. The new fourth processing line will allow the Gadsden plant to process 2.7 million birds a week.

Herman said that the new grain storage and distribution center in Attalla will serve chicken farms in ten counties particularly in Etowah and Marshall Counties.

“We are proud to operate in the great state of Alabama,” Herman said.

Mark Kaminsky is the Chief Operating Officer at Koch Foods and is the Chairman of the National Chicken Council.

“It is a privilege to be here today,” Kaminsky said. This facility is scheduled to be complete in July of 2021. “At $55 million this is one of the bigger projects that we will undertake.”

“I am a city boy from Chicago, but I have been coming South for a long time,” Kaminsky said. “I have spent thirty years in the poultry industry.”

“We are excited about not only this project, but our expansion in Gadsden,” Kaminsky said. This expansion is primarily for the food service industry, particularly Popeyes.

“Our customer base is large and demanding,” Kaminsky said. Koch processes 364 million chickens a year in Alabama and has over 3,800 employees here with. Our operations in Alabama has a cost of over one billion dollars a year and that trickles down to the local economy. “We have invested over $300 million in Alabama since 2016. We look forward to the completion of this mill and many more years of working in the State of Alabama.”

David Hooks is the Executive Director of the Gadsden-Etowah Industrial Development Authority.

“This project qualifies for two of the industrial sectors the Gadsden-Etowah Industrial Development Authority has targeted — Logistics and Food & Farming,” Hooks said. “Locating this state-of-the-art facility will go a long way in solidifying Etowah County’s position as a national leader in both sectors.”

“This is the largest thing that has ever happened in Attalla, and with $55 million in capital invested one of the largest things in Etowah County,” Mayor Means said. “I want to thank Koch and everybody for coming today. We’re excited that Koch Foods has chosen Attalla for this large, high-tech facility.

“We are thankful to have 28 new, high-paying jobs in our community, and this facility will build on the strong focus on industry and innovation that are woven into the history of Attalla,” Means explained. “In addition to the long-term operational jobs, there will be over 200 people working to build the facility here in Attalla over the next 18 months. The economic impact of construction alone will be huge for the City of Attalla and all of Etowah County.”

“You hear politicians say they care about the people the people the people – this lady really means it,” Means said of Ivey. “If you want to go to work in Alabama there are plenty of jobs. She has done a great job in a very short period of time. This governor knows economic development and she is my friend.”

Koch is pronounced “Cook.” The new 130-acre facility in Attalla will have the ability to hold more than 1 billion bushels of corn and will be served directly by Norfolk Southern Railroad.

The expansion makes Koch’s Etowah County operation one of the largest poultry-processing plants in the nation.

Koch Foods is based in Park Ridge, Illinois and operates four processing complexes in the state.
The company was founded in 1985 as a one-room operation. Since then Koch Foods has grown to become one of the nation’s largest vertically integrated poultry producers, with locations across Alabama, Georgia, Illinois, Mississippi, Ohio and Tennessee. The privately held company has more than 13,000 employees.

Construction is already under way at the site. The company will start assembling a management team in the first quarter of 2020 and will begin interviewing prospective production workers in early 2021.