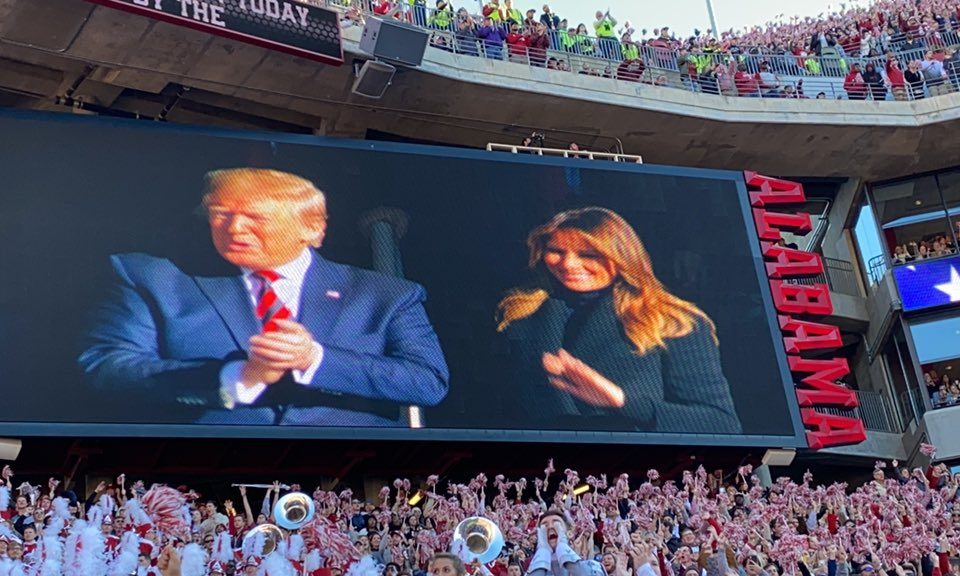 President Donald Trump enjoyed a much warmer welcome at the Alabama vs LSU game in Tuscaloosa, AL this weekend than he received at other sporting events he recently attended.

His introduction over the Bryant-Denny Stadium loudspeaker and appearance on the Jumbotron drew enormous cheers and applause from the majority of the crowd, eventually breaking out into chants of “USA, USA.”

The game in Tuscaloosa was the third sporting event Trump has attended in the last two weeks. He previously attended a World Series game in Washington, D.C. on Oct. 27 and a UFC event in New York last Saturday. During both events, the president was met with boos, with a chant of “Lock him up” breaking out in the crowd during the World Series games.

Various Trump 2020 flags were hung on the rails of skyboxes and multiple fans in Trump apparel were in the crowd. Outside of the stadium, vendors sold Trump apparel as well.

The mostly positive reception comes a month after a poll from the Morning Consult showed that 59 percent of Alabamians approve of the job the president is doing, the highest approval rating of any other state.

Though the majority of the crowd cheered Trump’s attendance, some in the crowd voiced their opposition by booing during his introduction.

Trump left the stadium during the fourth quarter ahead of LSU’s 46-41 win.

During halftime, a group sitting in the student section stood to reveal their shirts that each bore a letter to spell out “IMPEACH.” Some in the surrounding crowd booed the display, others directed glares and middle fingers toward the group. A photo of the demonstration spread across Twitter, gaining over 35,600 likes and over 9,000 retweets by the next day.

Various demonstrations against the president’s attendance took place outside of the stadium.

A rally titled “Alabama Against Trump” was held in nearby Annette Shelby Park where about a dozen people gathered with anti-Trump signs.

An online fundraiser raised over $5,000 in under 12 hours to bring an inflatable balloon depicting Trump as a baby, dubbed ‘Baby Trump,’ to Tuscaloosa. Organizers set up the 20-foot high, 13-foot wide balloon in nearby Monnish Park. The balloon was later slashed open by a man with a knife who was later identified as 32-year-old Hoyt Hutchinson of Tuscaloosa. Hutchinson was arrested after he tried to flee the scene and was freed on a $2,500 bond on Sunday.