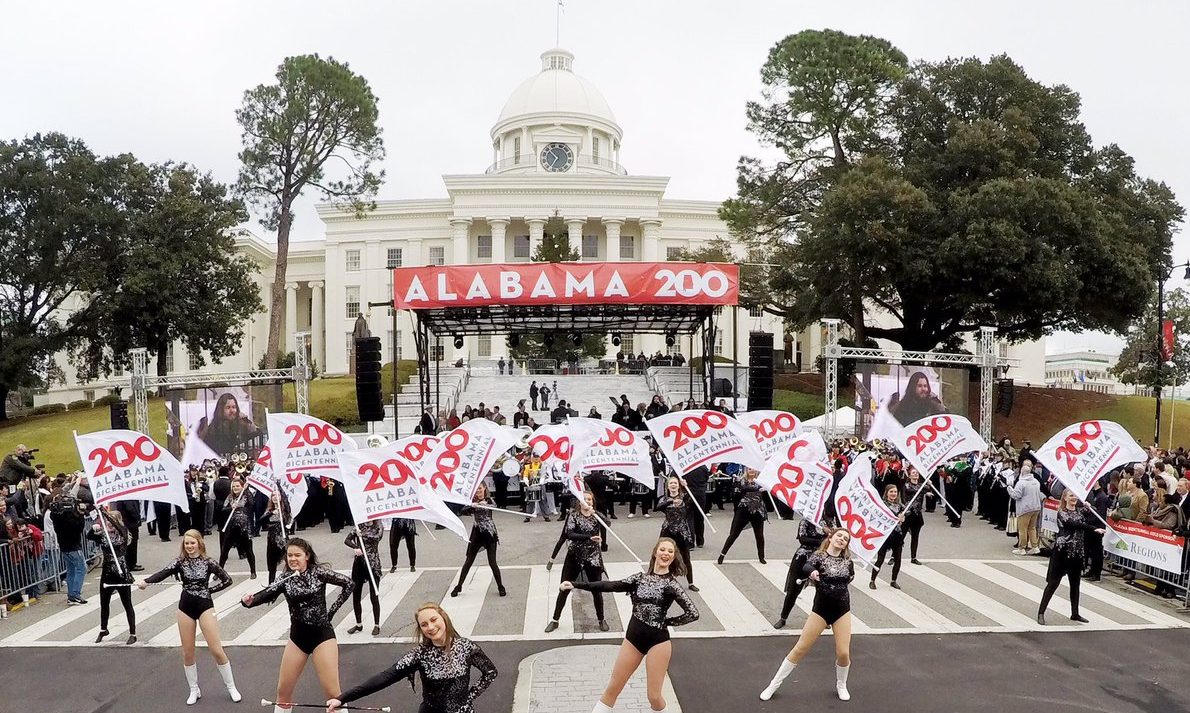 Saturday, the state of Alabama celebrated its 200th anniversary as a state with festivities in Montgomery. The state held a festival, concerts, parade, fireworks, and dedicated the new Bicentennial Park on Dexter Avenue across from the Capital building.

“AL sure knows how to throw a party!” Alabama Governor Kay Ivey (R) said. “This three-year celebration wouldn’t have been possible w/o the time & effort put forth by the Bicentennial Commission. Thank you to the #AL200 Commission, @SenatorOrr & the student committee for spearheading this endeavor. Job well done!”

State Senator Arthur Orr (R-Decatur) chaired the Alabama Bicentennial Commission, which planned the events and festivities that culminated in the weekend’s events.

Senator Orr said on social media, “Thank you @GovernorKayIvey Bicentennial Exec Director Jay Lamar and all who made yesterday an extraordinarily memorable day!”

“It was a wonderful weekend celebrating the 200th birthday of the state of Alabama,” Congresswoman Martha Roby (R-Montgomery) said. “I had the opportunity to attend celebratory events in our beautiful Capital City, and I am grateful to have spent this exciting time surrounded by Alabamians from all over the state.”

“Today we celebrate 200 years of the great state of Alabama,” Senator Richard Shelby (R) said. “I am honored to have served the state over the years, watching Alabama transform into an epicenter for national defense, space exploration, manufacturing, medical research, and so on. This is a day to recognize how far we have come, while also looking to the promising future we have ahead of us. I am proud of my state and all we have accomplished – today and every day. Happy 200th birthday, Alabama! Here’s to many more. #AL200”

“Thank you to everyone who worked to make the Alabama Bicentennial celebration (& all @al200 events) memorable,” Dr. Nicole Jones said. “Thousands of people visited downtown Montgomery for Alabama’s 200th birthday. A special thank you to author Lobo Tristan for presenting me w/ a copy of his book. #Our67.”

“Today in 1819, the greatest state joined the Union,” Congressman Bradley Byrne (R-Montrose) said. 200 years of memories, and I’m confident Alabama’s best days are yet to come! Happy birthday to my home state.”

“I recently led the efforts with my colleagues in the Alabama delegation to introduce a House resolution that recognizes the 200th anniversary of Alabama’s statehood,” Roby said. “I was honored to introduce Governor Kay Ivey Friday night and present her with a copy of the resolution.”

“One of the first & most lasting ways that we acknowledge both our history & our future is through the unveiling of Alabama Bicentennial Park today,” Gov. Ivey said Saturday on social media. “Thank you to the AL Legislature & to artist Caleb O’Connor for making this legacy park possible.”

“On Saturday, I attended the Alabama Bicentennial Park Dedication at the state Capitol,” Roby added. “It was a memorable weekend celebrating the incredible people and significant history of the state of Alabama.”

Economic developer and historian Dr. Nicole Jones told the Alabama Political Reporter, “Thank you to everyone who worked to make December 14th (and all of the Alabama Bicentennial events) memorable. Thousands of residents visited downtown Montgomery to celebrate Alabama’s 200th birthday. The Bicentennial Park dedication was special because it unveiled bronze interpretive plaques of everyday Alabamians engaging in activities that have shaped our state’s history. Executive Director Jay Lamar and her team of staff and volunteers deserve much recognition for planning the milestone event as well as the series of events held throughout Alabama’s 67 counties.”

Byrne says he will vote no on impeachment today