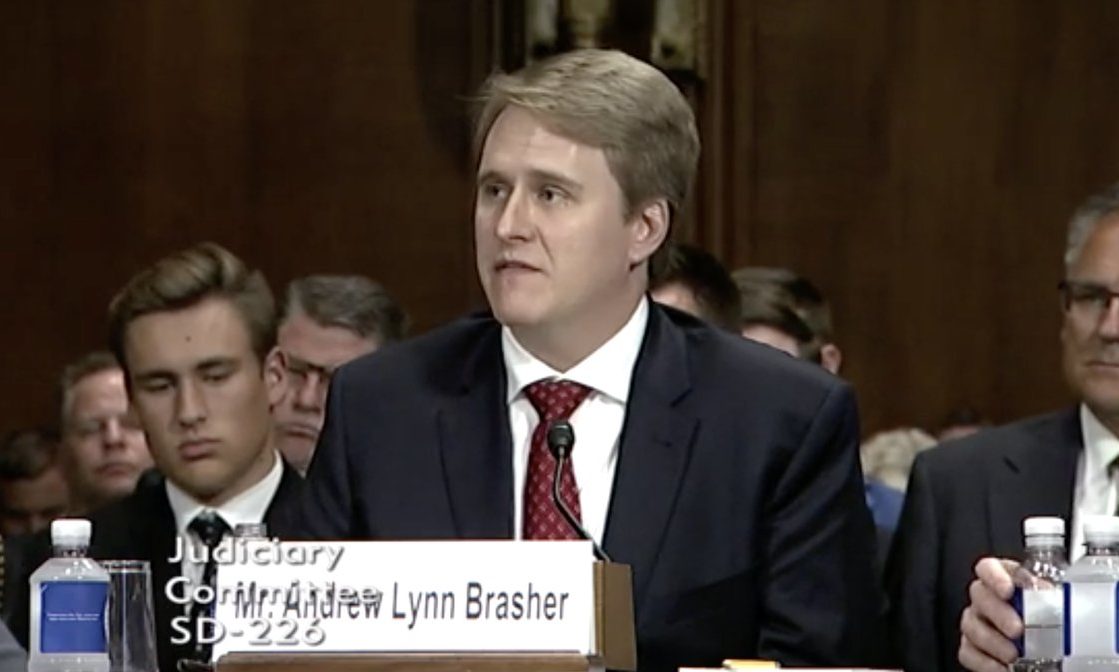 It is not news that Donald Trump has nominated partisan hacks to serve as federal judges — at pretty much every level.

Hacks are his thing.

(In reality, Trump likely has never nominated anyone, just stamped his absurd signature on whatever list of rightwing idealogues the Federalist Society plopped down in front him.)

But I happen to know one of the hacks coming up for confirmation to the 11th Circuit Court of Appeals.

The guy who’s been a federal judge for about 15 minutes.

It is astounding to me that I have to write, again, about Brasher and why he’s unfit to serve as a judge in a federal appeals court or any federal court or state court or even the court on that show “Hot Bench.” It is also extremely depressing.

Because Brasher is the worst sort of nominee — he has no judicial ethics.

Instead, he has charted a pathway to success for himself and he couldn’t give two damns about the law, about precedent or about the people he will cause to suffer due to his complete indifference to canons of judicial ethics.

There are many, many examples I could use to demonstrate this. The last time I wrote about Brasher’s ineptitude, I brought up the time that I had to explain gaming laws to him — just after his office (he was the solicitor general for Alabama at the time) had sent a letter to all state lawmakers offering incorrect guidance on proposed gambling legislation.

There was also the time he banged his head on a wooden lectern during questioning of his own witness, who the state was paying handsomely to provide absurd testimony in an abortion case.

But none of those really capture the true awfulness of the man who could be elevated to the second highest court in the country.

This one does: During a hearing in that aforementioned abortion case, it came to light that Brasher and his office had paid tens of thousands of dollars for the “expert” testimony of a few “doctors.” That included one guy who believes abortion causes mental illness, and another guy who wrote all of the material and outlined testimony for the others.

The latter guy is Vincent Rue, and federal judge Myron Thompson became suspicious that Rue had essentially written a report for Dr. James Anderson, the abortion-causes-mental illness guy. Brasher went to great lengths to assure Thompson that that wasn’t true and that Anderson’s testimony would be his own.

“Rue’s involvement in this litigation is no different than the involvement of the attorneys or the attorneys’ in-house paralegal staff,” Brasher told Thompson. “Dr. Anderson testified multiple times that his opinions are his own, based on his extensive experience as a physician.”

None of that was true.

Thompson later noted that Anderson testified that his report submitted in the case was “… drafted, in its entirety, by Vincent Rue.”

“It became apparent that Rue’s involvement in drafting this supplemental report reached beyond the typical involvement of an attorney or litigation consultant in helping an expert put his opinions into words or providing background research,” Thompson wrote. “Anderson presented the supplemental report as his own work by virtue of his signature at the bottom.”

So, to sum that up: Brasher hired a set of quack doctors with taxpayer dollars, allowed them to submit bogus “expert” reports and then lied to the judge to cover it up.

Because that’s the kind of guy he is.

If you doubt that, read through the trove of emails published by the Great Falls (Mont.) Tribune a few years ago. The emails, obtained through an FOIA request, document the political nature with which Montana’s former solicitor general, Lawrence VanDyke, operated his office.

Most of those emails show VanDyke coordinating with other solicitor generals and state AGs across the country to latch onto each other’s hot-button amicus briefs, which they submitted in any case that might make the daily mentions on “Fox and Friends.”

Brasher wrote briefs to get his name attached to all sorts of big cases — from a photographer suing over being forced to photograph a gay wedding in New Mexico to guns rights issues in New York and Connecticut (where 20 first-graders had recently been gunned down in their classrooms) to requiring proof of citizenship to vote.

And those emails show he wasn’t simply going along with the party line. He was a warrior for the cause, providing reasons why his briefs opposing basic rights for gay people and arguing gun laws weren’t about public safety were the most sound legal positions.

Of course, this was the same guy who defended Alabama’s racist gerrymandering, who went to bat for absurd abortion restrictions and who fought the rights of same-sex couples to adopt foster children.

But worst of all, you’re denying a decent judge this coveted position. There has to be a judge — even a Republican judge, if that matters to you — out there with more experience and a better track record.

If judicial ethics and standards matter at all to you, you’ll find that man or woman and appoint them instead.