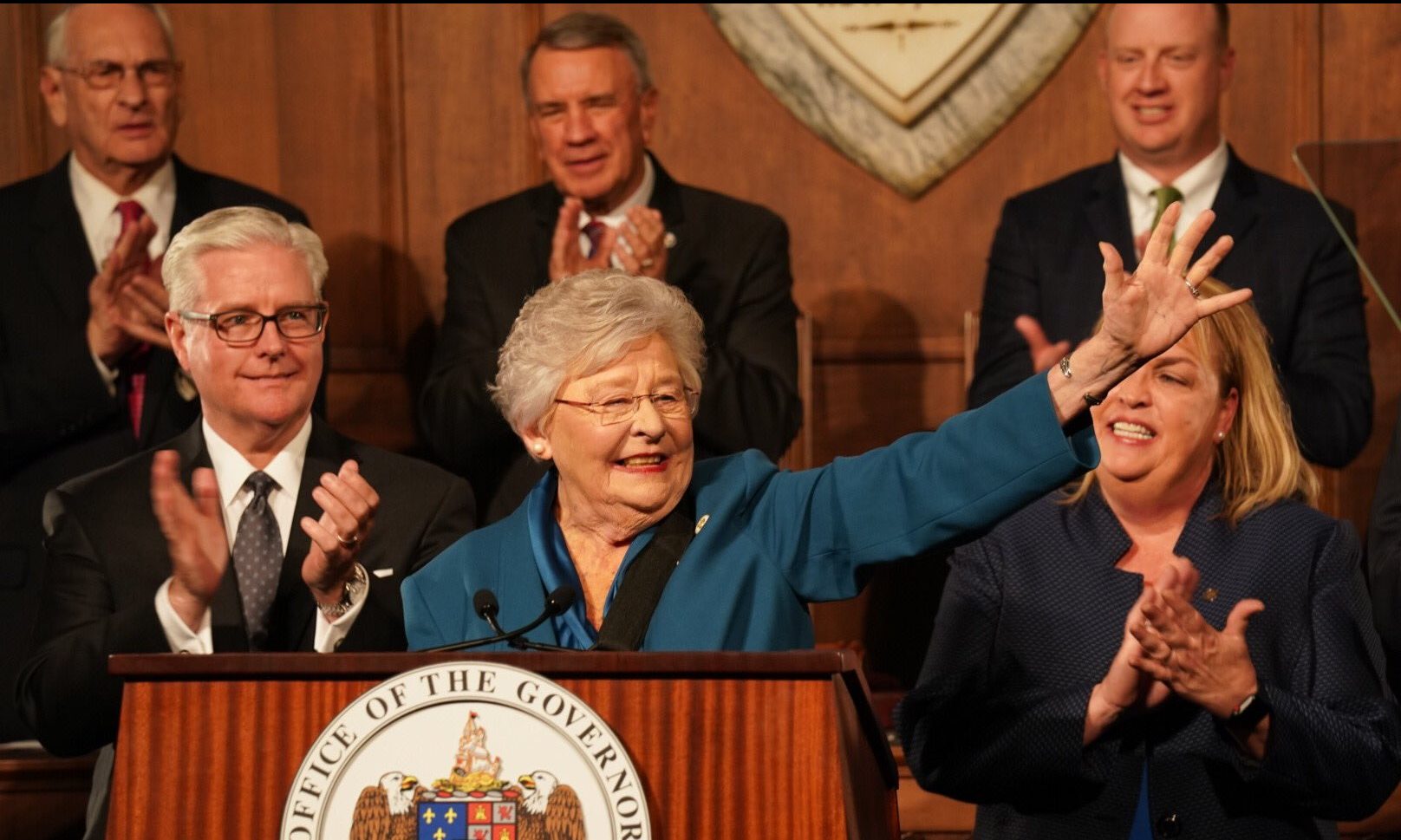 During her annual State of the State address to a packed joint session of the Alabama legislature in the Old House Chambers of the historic state Capital building, Gov. Kay Ivey urged lawmakers to deal with the problems that have long plagued the state’s prison system.

“After becoming your governor in April 2017, I realized that our great state had ignored too many problems for far too long,” Ivey said. “We had put Band-Aids and duct tape on old ideas, old roads and bridges, and tired old prisons long enough.”

Alabama’s prisons are overcrowded, understaffed, dangerous, have a poor track record of rehabilitation, have long neglected maintenance and modernization issues, and have not provided adequate healthcare and mental health services.

“Both my strong faith in the Lord – and a heartfelt concern for basic human rights – gives me a sense of urgency to address our longstanding challenges within our criminal justice system,” Ivey said. “We simply cannot afford to wait any longer to tackle this problem… and failure is not an option.”

Ivey said lawmakers made good progress during the last session to address the issue of understaffing, but more needs to be done.

“I’m pleased to report that our recruiting and retention efforts are improving and moving in the right direction,” she said. “Over the past seven months, the Criminal Justice Study Group I appointed last year analyzed many of the crucial components necessary to address the needs to rehabilitate those within our prison system.”

“Currently, work is well underway in addressing our antiquated and crumbling prison infrastructure,” Ivey said. “In the past few weeks, I visited Holman Correctional Facility in Atmore and Tutwiler Prison for Women in Wetumpka to see these issues firsthand.”

“Some of our worst, most over-crowded facilities – one of which was built more than 90 years ago — were never designed for the number of violent offenders we have today.”

Ivey said that ADOC Commissioner Jeff Dunn is “Spearheading efforts to build three new prisons that will transition our facilities from warehousing inmates to rehabilitating people. Ladies and gentlemen, Alabama has no choice but to reinvent our corrections system by replacing outdated and unsafe facilities that pose a great risk to public safety – and inhibit development of programs for inmate rehabilitation.”

Ivey said that the Community College System is providing educational, technical and workforce training to aid in successful reentry. “ Ingram State, where I also visited recently, is the only postsecondary institution in the country that exclusively serves the incarcerated population.”

Ivey introduced Brandie McCain, a former prisoner who has completed the coursework needed for three logistics certificates at Ingram State. She was among the first group of Ingram students to earn a nationally recognized credential in logistics and now works at Wright Way Staffing in Fairfield, where she quickly moved up the ranks to become an office administrator and staff recruiter.

Gov. Ivey gave the speech in a sling after tripping over the First Dog at the Governor’s mansion last week.

“As you can see, I’m working with one arm – not tied behind my back – just tied up!” Ivey said. “But, as I always say, there’s no step too high for a high stepper! I’ll be fine.”

“Members of the Legislature, on this first day of the 2020 legislative session, we can be confident with our plans to build on our past as we step boldly into a new century for our great state,” Ivey said. “Our 3rd century begins with a strong, robust economy and a renewed commitment to look for new opportunities to answer old challenges, many of which have been around for decades.”

Governor Ivey has been meeting with the Bipartisan Leadership of both the House and Senate.

“Unlike what we’ve seen nationally, I knew that no one party has a monopoly on good ideas,” Ivey explained. “And I felt — and time has proven me correct — that these bipartisan meetings would help us come up with bipartisan solutions on everything from infrastructure funding to hopefully improving our state’s education system.” “A prime example of the benefit of working together was Rebuild Alabama.”

“In recent weeks and months, we have announced the state’s portion of $122 million worth of road and bridge projects in more than 48 of Alabama’s 67 counties,” Ivey said. “And this is just six months after the new revenue began coming in. And as I promised the people of Alabama on the day I signed this bill into law, Rebuild Alabama will only be spent on building roads and bridges. And, in fact, we added strong accountability measures to make certain of this.”

“During last year’s session, the Legislature gave the voters of Alabama an opportunity to help move our education system in a bold, new direction, by having an opportunity to vote on AMENDMENT ONE, which will be on the March 3rd primary ballot,” Ivey said. “Sadly, too many of our third graders are not proficient in reading. In fact, according to the Nation’s Report Card, we are 49th in the nation in reading and we are 52nd in the nation in math! And it only gets worse as they get older… too many of our high school graduates simply aren’t ready for college or a career.”

“This isn’t the fault of our hard-working teachers, principals or local superintendents…Folks, it starts at the top,” Ivey said. “Alabama is one of only six states that still has an elected state school board and this board has selected 5 State Superintendents in the past 5 years. Very simply, Amendment One will create term limits for the State Board and no member will serve more than two six-year terms, thus bringing fresh new ideas to the commission every few years.” “It’s time to vote YES for Amendment One on March 3rd!”

“We all know that a world-class workforce begins with a world-class education system,” Ivey said. “My education budget that I am proposing will provide an additional $25 million dollars to expand our nationally-recognized First Class Pre-K program.”

Ivey said that this will expand the program by another 193 classrooms.

Ivey proposed creating a $1 billion-dollar public school and college bond issue for K-12 education, as well as for our two- and four-year colleges and universities to allow for capital improvements across the state.

Ivey stated that she has a goal of adding 500,000 employees with post-secondary credentials by 2025.

Ivey also called on the Legislature to provide a two percent increase for all state employees.

“This is the third straight year our state employees will see an increase in their paychecks,” Ivey said. “Whether it is the State Trooper patrolling our highways or a social worker rescuing an abused child, we can be proud to have so many dedicated men and women who are giving their best to the people of Alabama.”

“As we all know, 2019 was an especially difficult year for those who wear a badge,” Ivey said. “Seven members of the Alabama Law Enforcement community were killed in the line of duty. These heroes exhibited the best virtues of our state – they were selfless, brave, dedicated and, in the end, willing to sacrifice their lives for all of us.”

Mrs. Joanne Williams, the widow of Lowndes County Sheriff Big John Williams was a special guest of the governor.

Ivey said that increasing the number of highway patrol officers has been a top focus of her administration.

“We have increased the number of Troopers from 365 to 435, a net increase of 19 percent!” Ivey said. “We have almost doubled our marine officers from 24 to 42! My budget will include additional funding to hire and train 50 additional sworn officers.”
Ivey urged every citizen to participate in the 2020 Census.

“It is ever so important for every Alabamian to join me in saying “I Count” by completing a census form!” Ivey stated.

Ivey said that access to broadband; is another top priority to continue increasing the availability of high-speed Internet throughout the state, especially in rural Alabama.

“Currently, some 220,000 Alabamians do not have any wired Internet providers where they live,” Ivey stated. “Our efforts will not end until every Alabamian has access through high speed broadband.”

Ivey said that her budget will make a substantial investment in the area of health care… both rural health and mental health as well including a pilot program to incentivize primary care physicians and nurse practitioners to establish services in medically underserved areas.

Ivey asked for funding to build three new crisis centers in the state.

“When open and fully staffed, these centers will become a safe haven for people facing mental health challenges; here, they can be stabilized and treated without being sent to a jail or the hospital,” Ivey continued.

Ivey said that the Mental Health Department is partnering with the Department of Education to ensure we are promoting “Whole Child Wellness.”

Ivey said that the state has the best economy our state has ever had.

“Thanks to the hard work of Commerce Secretary Greg Canfield and his team — as well as Labor Secretary Fitzgerald Washington and his folks — these are unquestionably the best of times,” Ivey stated. “We have the lowest unemployment rate in our 200-year history at 2.7 percent. More than 82,000 of our fellow citizens are working today than were working just a year ago.” “And fewer people are living in poverty than ever before.”

Ivey also discussed gaming, announcing that she will sign an executive order to establish a small working group to begin working, to gather all the facts on if some form of gaming expansion occurred.

Ivey said that she and her working group will bring the facts to the 140 members of the Legislature and the people of Alabama.

“My pledge would be for the people of Alabama to have the final say,” Ivey said. “But first, we must get the facts and understand what they mean.”

“With the continued involvement of all our people — and with God’s continued blessings — there is every reason to believe that our third century will be our best yet!” Ivey stated.

The Legislature would have to address the medical marijuana bill if the governor amends or vetoes it before the close of session.