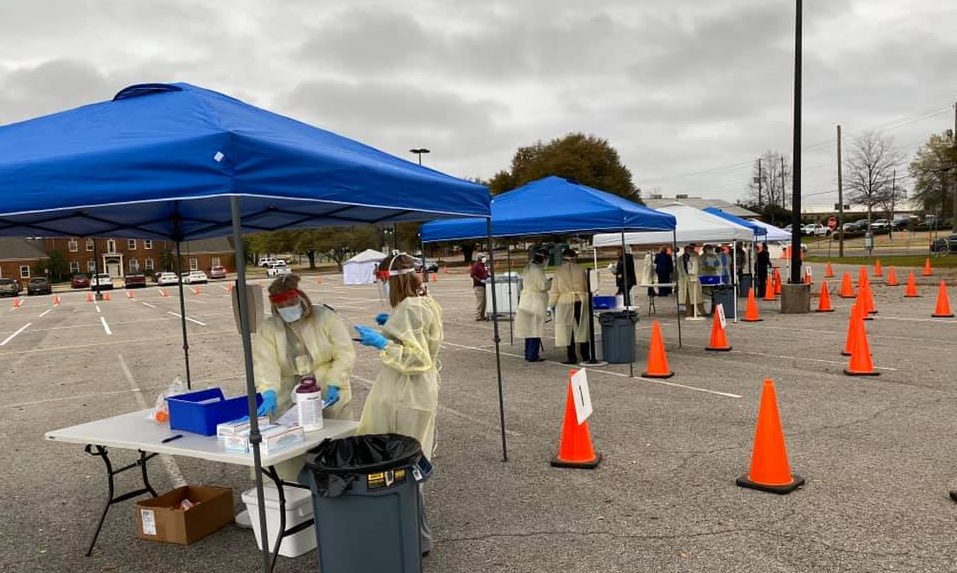 UPDATE: This story has been updated with new information from DCH Health System.

The hospital says it will continue testing, but it will move to swab tests only and supplies are “critically low.”

Only those with COVID-19 symptoms will be tested. DCH is also working to source new testing supplies because their current stock could run out early next week.

You can read the hospital’s full update at the bottom of this story.

More than 500 samples collected from people at a hospital in Tuscaloosa who were seeking a test for COVID-19 over the last week were spoiled or unable to be tested.

DCH Health in Tuscaloosa sent more than 1,000 samples to the Alabama Department of Public Health’s state lab over the four days. At least 528 of the samples were not sufficient to be tested primarily because of a lack of testable material, according to the hospital, and at least some of the insufficient samples were spoiled during transport.

“We must all learn quickly and we must all do better for Tuscaloosa and our state,” Tuscaloosa Mayor Walt Maddox said Friday night.

Only 40 of the tests collected over the past four days have been processed, and one of them was positive. More than 400 tests remain to be processed from the DCH testing site.

Tuscaloosa County has reported four cases of COVID-19 so far, according to the Alabama Department of Public Health.

Mapping COVID-19 in Alabama
We're tracking the spread of cases in Alabama.

The testing issues in Tuscaloosa resulted from a testing resource and material shortage. That’s been a problem in Alabama and across the country, as a number of hospitals and testing sites have repeatedly said their supplies are severely limited. Some, including DCH, are warning that their supplies could run out early next week.

Despite the shortage, the hospital tried to keep testing. Medical practitioners have tried to use an alternative method of using sputum—a method the Alabama Department of Public Health suggested the hospital use. But some people were not able to produce enough sputum—a mixture of saliva and mucus coughed up from the respiratory tract.

Some of those who weren’t able to produce enough sputum were told at the site that they couldn’t be tested. Others had their samples sent to the ADPH, but the lab wasn’t able to test the samples because there wasn’t a big enough sample of sputum to run the test.

In an initial statement Friday, the hospital said a sizeable portion of the samples were spoiled because of insufficient cooling during the transport process to Montgomery, where the state lab is located. After further investigation, the hospital said Saturday that it appears most of the specimens that weren’t able to be tested were not able to be tested because the sample wasn’t large enough.

“Feedback from the state lab has indicated that the high rate of rejected sputum specimens was not primarily due to improper transport and spoiling (this was given as one of the reasons for rejected samples statewide),” the hospital said Saturday. “The sputum samples from DCH were primarily rejected due to a lack of testable material (not enough sputum in the collection cup).”

DCH Health said in its statement that visually screening the samples at the collection site has been very difficult because of the protective measures in place to prevent medical practitioners from being exposed to the virus.

“So now only swabs will be done so that the provider can better directly control the adequacy of material collected,” the hospital’s statement reads. But supplies remain severely low. DCH says it is working with FEMA, ADPH and the federal government to get more swab test kits to meet the needs of the Tuscaloosa community—as soon as possible.

“Only swab tests will be conducted and the supply is critically low,” the hospital says.

Only those screened with symptoms indicating a high likelihood of infection will have a specimen collected for testing. Those whose record indicates the sample was insufficient for a test can go back and get retested, the hospital said. Results should be available on each individual’s patient portal within about five days.

DCH is not the only hospital to report a shortage of testing materials in the state. Hospitals are increasingly asking people who only have mild or moderate symptoms to not seek a test. They say they are trying to conserve supplies for those who have more severe symptoms and may need emergent care.

East Alabama Medical Center in Opelika, near Auburn, said Wednesday evening that they’re working hard to deal with hundreds of phone calls and an escalating number of people showing up at their testing sites with symptoms seeking a test.

Mobile County in South Alabama issued a public notice this week, saying that testing in the county will likely remain limited for the time being because of supply shortages. “Very limited testing is available because of a lack of federal supplies,” the Mobile County Health Department said.

UAB plans to open a drive-in, appointment-only testing facility on Monday, but they say they will only be able to test 250 people per day. The hospital said it is sourcing its own supplies for testing and testing in its own lab to avoid the supply chain problems faced by other hospitals.

Though the testing shortage does not appear to be related to public and commercial labs’ ability to run the samples, it is taking up to five days for test results to come back from the state’s lab in some cases. And in some private labs, it is taking up to 72 hours if not longer.

DCH will be offering the screening/testing service tomorrow, Sunday, March 22, from 2-5 p.m. in the parking lot just west of its Regional Medical Center campus. The times are consistent with staff availability and potential poor weather. Only swab tests will be conducted and the supply is critically low. This means only those screened with symptoms indicating a high likelihood of infection will have a specimen collected for testing.

The service will resume 8 a.m. – 5 p.m. Monday through Friday next week as long as supplies remain available and the weather allows for the process to safely continue. Additional measures being taken to improve and continue the effort include:

Feedback from the state lab has indicated that the high rate of rejected sputum specimens was not primarily due to improper transport and spoiling (this was given as one of the reasons for rejected samples statewide). The sputum samples from DCH were primarily rejected due to a lack of testable material (not enough sputum in the collection cup). Visually screening the samples at the collection site has been very difficult due to the protective measures in place so now only swabs will be done so that the provider can better directly control the adequacy of material collected.

If you had a specimen collected you can check your results on the DCH portal. It takes about five days for results at the moment. If your record indicates the sample was insufficient for a test and you are feeling worse, please know you can come back and get retested or see/call your doctor. False negatives are not impossible and even if negative you can still get infected later. You should practice social distancing for at least 14 days from the onset of symptoms.

Perhaps Maddox's biggest challenger is a man who is not on the ballot, Tuscaloosa-based real estate developer Stan Pate.

The CDC reports that American life expectancy has dropped a full year in the first six months of 2020.

Alabama’s vaccination numbers improve, but still lag behind other states

The Biden administration announced Tuesday that states would see a 25 percent increase in vaccine shipments this week.