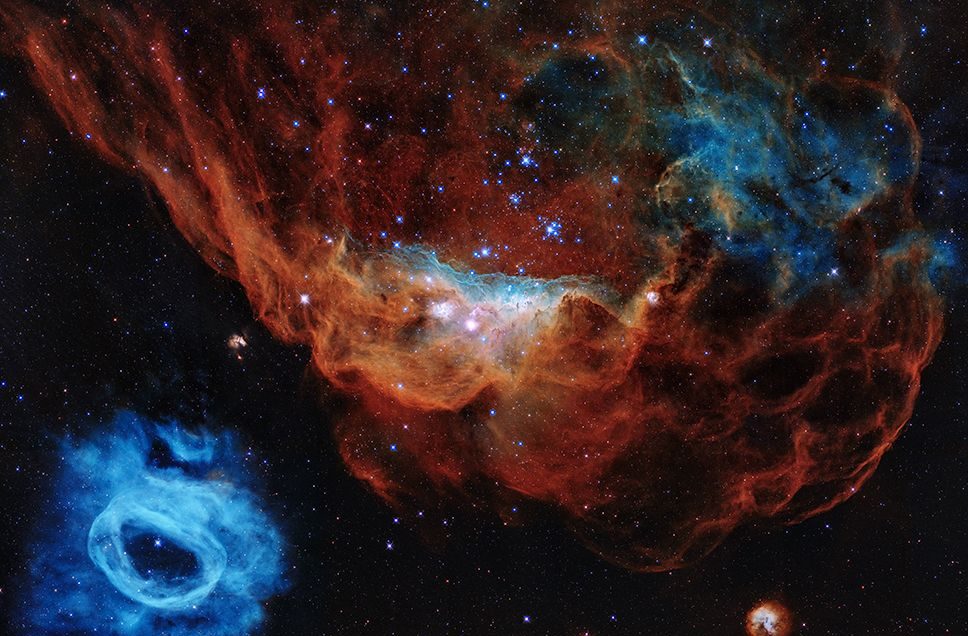 Friday, Congressman Robert Aderholt (R-Haleyville) released a statement saluting the Hubble Space Telescope on the thirtieth anniversary of its launch to explore the cosmos.

“Today is a great day for space exploration as one of the most incredible pieces of technology ever produced for space flight turns 30 – the Hubble Telescope,” Rep. Aderholt said. “Launched from the Space Shuttle Discovery on this day in 1990, the Hubble Telescope has given the world a glimpse into the great expanse of the universe, showing us what no human has ever witnessed before. Providing unbelievable amounts of knowledge to NASA’s scientists and a great amount of inspiration to kids across the country, the Hubble Telescope is a beloved part of our mission to explore space.”

“Making this annivesary even more special, all of the design, development, and construction of Hubble was done right here in Alabama, at the Marshall Space Flight Center in Huntsville,” Aderholt continued. “And, if you never have before, check out what Hubble captured on your birthday by clicking here.”
https://www.nasa.gov/content/goddard/what-did-hubble-see-on-your-birthday

Using a rocket to put a telescope in space was first proposed by German scientist Hermann Oberth when he published “Die Rakete zu den Planetenraumen” (“The Rocket into Planetary Space”). In 1946, Princeton astrophysicist Lyman Spitzer wrote about the scientific benefits of a telescope in space, above Earth’s atmosphere.

in 1957, the National Aeronautics and Space Administration (NASA) launched two Orbital Astronomical Observatories (OAOs) into orbit, which made a number of ultraviolet observations and provided learning experiences for the manufacture and launch of future space observatories. Following the OAO program. Spitzer gathered the support of other astronomers for a “large orbital telescope.” In 1969, the National Academy of Sciences gave its approval for the Large Space Telescope (LST) project.

Funding for NASA space programs began to decrease in the 1970s forcing designers to downsize their proposed telescope. The size of the main mirror was reduced from 120 inches to 94. In 1974, the LST Science Working Group recommended the space telescope carry a large complement of interchangeable instruments. The project was to be launched into space by the Space Shuttle, then also under development. The European Space Agency (ESA) joined the project in 1975 and provided fifteen percent of the funding of the LST via contribution of the Faint Object Camera (FOC) and the solar arrays. In return, NASA guaranteed at least fifteen percent of telescope time — the amount of time astronomers use the telescope for space observations — to European astronomers. In 1977, Congress approved funding to build one of the most sophisticated satellites ever constructed.

NASA chose Marshall Space Flight Center in Huntsville, Alabama, as the lead NASA field center for the design, development and construction of the space telescope. Marshall delegated Perkin-Elmer Corporation (now Hughes Danbury Optical Systems) the task of developing the Optical Telescope Assembly and the Fine Guidance Sensors. Lockheed Missiles and Space Company (now Lockheed Martin) was selected by Marshall to build the spacecraft’s outer structure and the Support Systems Module (the internal support systems, which include the computer, power, communications, pointing and control systems) and then assemble the telescope together.

The Goddard Space Flight Center in Greenbelt, Maryland, was assigned the lead in scientific instrument design and ground control for the space observatory. Five devices were selected as the initial instruments that would be aboard the space telescope: the Faint Object Camera, the Wide Field/Planetary Camera, the Faint Object Spectrograph, the High Resolution Spectrograph and the High Speed Photometer. Space shuttle support was provided by the Johnson Space Center in Houston, Texas, and the Kennedy Space Center in Florida.

In 1983, the Space Telescope Science Institute (STScI) was established at The Johns Hopkins University in Baltimore, Maryland to evaluate proposals for telescope time and manage the resulting telescope observations. Delays and cost overruns forced the mission to be moved from December 1983 to the second half of 1986. The original plan was to take the telescope from orbit back to Earth for servicing; and then return it back to space. Plans were changed in the 1980s to conduct servicing missions in orbit versus returning the telescope to Earth and refurbishing it on the ground. The space telescope was renamed the Hubble Space Telescope (HST), after astronomer Edwin Hubble. By 1985, the telescope was assembled and ready for launch well ahead of its December 1986 launch. The Challenger accident that year however grounded the space shuttle fleet for two years. The Hubble team made several improvements in the design while it was delayed.

When the first Hubble images were sent to Earth, astronomers did not see crisp, point-like images of stars. Instead, they saw stars surrounded by large, fuzzy halos of light. They soon realized that this issue was created because the edges of the telescope’s primary mirror were ground too flat by just a fraction of the width of a human hair. Although perfectly smooth, the mirror could not focus light to a single point. It had been ground to the wrong shape because of a flaw introduced into the test equipment used to evaluate the mirror’s curvature prior to launch. Hubble was not designed for astronauts to replace the primary mirror.

Before Hubble had launched the engineers had already begun working on an improved, second-generation camera for the space telescope. This instrument, called the Wide Field and Planetary Camera 2 (WFPC2), was meant for installation by astronauts at a future date. Optics experts realized they could build corrective optics into this camera to counteract the flaw in the primary mirror. Meanwhile, Hubble scientists and engineers devised a set of nickel- and quarter-sized mirrors to remedy the effects of the primary mirror on Hubble’s other instruments. The Corrective Optics Space Telescope Axial Replacement (COSTAR) was a refrigerator-sized device that could deploy the corrective mirrors into the light paths of the telescope’s other science instruments to focus their images properly. In December 1993, a space shuttle mission launched to add new instruments such as the WFPC2 and COSTAR, which countered the effects of the primary mirror’s flawed shape.

A second space shuttle second servicing mission (SM2) took place, resulting in the replacement of degrading spacecraft components, and the installation of new instruments such as the Space Telescope Imaging Spectrograph (STIS) and the Near Infrared Camera and Multi-Object Spectrometer (NICMOS).

On November 13, 1999, the fourth of six gyroscopes (gyros) failed on Hubble, and the telescope was essentially dead in space. The gyros measure the spacecraft’s rate of motion and help point Hubble toward its observation target. Unable to conduct science without three working gyros, Hubble entered a state of dormancy called safe mode. Essentially, Hubble “went to sleep.”

Again, astronauts aboard the space shuttle came to Hubble’s rescue with Servicing Mission 3A (SM3A) on December 1999 and Servicing Mission 3B (SM3B) on March 2002. SM3A astronauts replaced all six gyroscopes with new ones, and installed a faster, more powerful main computer, a next-generation solid-state data recorder, a new transmitter, new insulation and other equipment. During SM3B, astronauts installed a new science instrument called the Advanced Camera for Surveys (ACS). ACS sees in wavelengths ranging from visible to far-ultraviolet, and can produce 10 times the science results in the same amount of time than the camera it replaced, the Faint Object Camera (FOC).

In 2009, space shuttle astronauts returned again on Servicing Mission 4 (SM4) and installed two new scientific instruments: the Cosmic Origins Spectrograph (COS) and the Wide Field Camera 3 (WFC3). They also repairs the Space Telescope Imaging Spectrograph (STIS) and the Advanced Camera for Surveys (ACS), the first-ever on-orbit instrument repairs. In order to prolong Hubble’s life, other components were replaced including new batteries, new gyroscopes and a new science computer. In addition, a device was attached to the base of the telescope to facilitate de-orbiting when the telescope is eventually decommissioned. The space shuttles were retired in 2011

Hubble’s mission was to spend at least 15 years probing the farthest and faintest reaches of the cosmos. Hubble has exceeded this goal, operating and observing the universe for almost 30 years. During its time in orbit, the telescope has taken more than 1.4 million observations, and astronomers have used that data to publish more than 16,000 peer-reviewed scientific publications on a broad range of topics.

No more servicing missions are scheduled to repair or replace equipment on Hubble. However, a dedicated team of engineers and scientists are continuously working to keep Hubble operating for as long as possible. For example, Hubble’s engineers have figured out a way the telescope could continue observing the universe on only one gyro, using other types of sensors on the spacecraft to make up for gyros that have failed. This and other innovations designed to extend the lifetime of Hubble’s equipment will keep the telescope exploring for years to come.