I’ve just seen this Anniston Star photo of the June 3rd George Floyd “protest” march in Heflin. As you can see, a very mixed crowd, black and white, young and old, all peaceful. But serious. What especially got my attention was that sign a lead marcher is holding, the big print saying “Stop Hate, Teach Love.” And the fine print from Nelson Mandela explaining: “No one is born hating another person because of the color of his skin . . .” 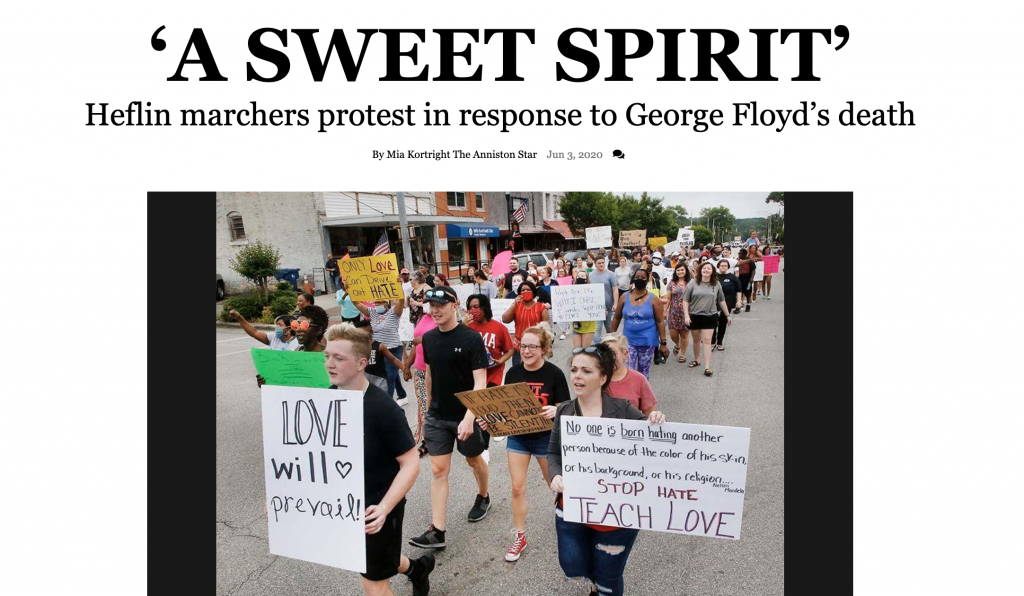 Would this apply to Derek Chauvin, the Minneapolis policemen who killed George Floyd? The man’s very name suggests he was somehow “to the manner (if not the manor) born.”

“Chauvin” is a French family name. We get the term “chauvinism” from Nicolas Chauvin, a French army officer of the new Republic and later under Napoleon who was notorious for his excessive, extreme patriotism, and portrayed as such in popular drama of the time. So our English term “chauvinism” means “irrational and extreme belief in the superiority or dominance of one’s own cause, group, race, sex, nation etc.” It’s used most often in academic writing, in plain language “Us vs Them-ism,” seeing the ”them” as enemies. As in violent racism.

So, was Derek Chauvin born a violent racist?

I don’t think so. I’ve searched the internet for photos of him as an infant or young child, looking for clues to his childhood development, hoping to see if he looked happy, or angry, or sad. I didn’t find any photos at all.

But I persist in believing that human infants are born with various kinds of potential. But with a bias toward “playing well with others,” since ours is after all a gregarious species. So a child who grows up wanting to hurt or kill others must have come under the influence of – or perhaps we could say was infected by the virus of – something like chauvinism. In an important sense, then, another victim.

Not that it’s wrong to be very angry about what Derek Chauvin did, not that he shouldn’t be prosecuted and punished under the law. But as we mourn the death of George Floyd, let’s also grieve for the child Derek who was taught hate instead of love, that hurting child who may still be hiding inside this man.

The sign says “Teach love.” I’m afraid the hardest part is learning love, shaking off that viral Us vs Them disposition to see enemies everywhere. I like what contemporary Buddhist spiritual leader Thich Nhat Hanh declares: “No person is the enemy.” But didn’t we get the same advice two thousand years ago from Jesus? – “Love your neighbor – no exceptions!“

We are all in this together.