Updated at 8 p.m. to include a response from Rep. Will Dismukes.

The executive director of the Alabama Democratic Party on Friday called for the resignation of a Republican state representative over his support for the Confederacy, Confederate monuments and his membership in a local Sons of Confederate Veterans chapter.

The Alabama Democratic Party — in a statement released Friday — said that Rep. Will Dismukes, R-Pratville, is receiving criticism for his support of the lost Confederate cause and “as elected officials of all stripes seek to move Alabama forward, Dismukes is stuck in the past.”

“Rep. Dismukes, Chaplain of the ‘Prattville Dragoons: Sons of Confederate Veterans,’ was recently praised in the group’s newsletter as being representative of the Confederacy’s ‘Godly heritage,’” the press release states.

“We need elected officials who work for a better tomorrow for all Alabamians,” said Wade Perry, executive director of Alabama Democratic Party, in a statement.  “That should go without saying. If little Will wants to play dress-up and pretend to fight for the lost cause, he should resign. His job is to pass laws that help Alabamians, not honor folks who fought to preserve the institution of slavery.”

Dismukes in a Facebook post later on Friday addressed the call for his resignation, and said he’d neither resign nor apologize for the photo in which he was standing in front of the American and Confederate flags.

“I will release an official statement tomorrow. No worries I’m not resigning because the Democratic Chairman requested my resignation. I also will not be apologizing over a picture in front of the flags nor being chaplain of my local SCV camp which is listed as a heritage group by the SPLC,” Dismukes wrote in his post. “We have enough people caving to the communist left. For the love of life it’s time for people to stop being so sensitive and apologetic and take a stand before our country is Gone with the Wind. This is way bigger than history and monuments. Deo Vindice.”

Dismukes’s use of the phrase “Deo Vindice” — in his post Friday, and in other posts on his social media — is notable. The phrase was selected by the Confederacy as a motto, and translates to “God will vindicate,” according to the Museum of American History.

In an interview on WVNN’s “The Jeff Poor Show,” Dismukes was critical of a recommendation by House Minority Leader Anthony Daniels, D-Huntsville, to stop using tax money to fund the Confederate Memorial Park in Chilton County.

The Alabama Historical Commission receives about $600,000 annually to run the park, according to Al.com.

“I think he’s dead wrong. I don’t think it would be a wise decision for our state to move in that direction,” Dismukes said during the program, as quoted by Yellowhammer News.


In a Facebook post on June 14, Dismukes called for more funding for the Confederate Memorial Park.  “No chance we stop funding the State Park!!! This will not happen on my watch,” he wrote.

“We technically give a small portion of what is actually supposed to go towards the park. If anything we should give more to the park and ensure our history is preserved,” Dismukes wrote in the post.

In an April 27 Facebook post, Dismukes refers to the Civil War as the “War of Northern Aggression.” In several other Facebook posts, he references and quotes the national motto of the failed Confederacy, “Deo Vindice.” 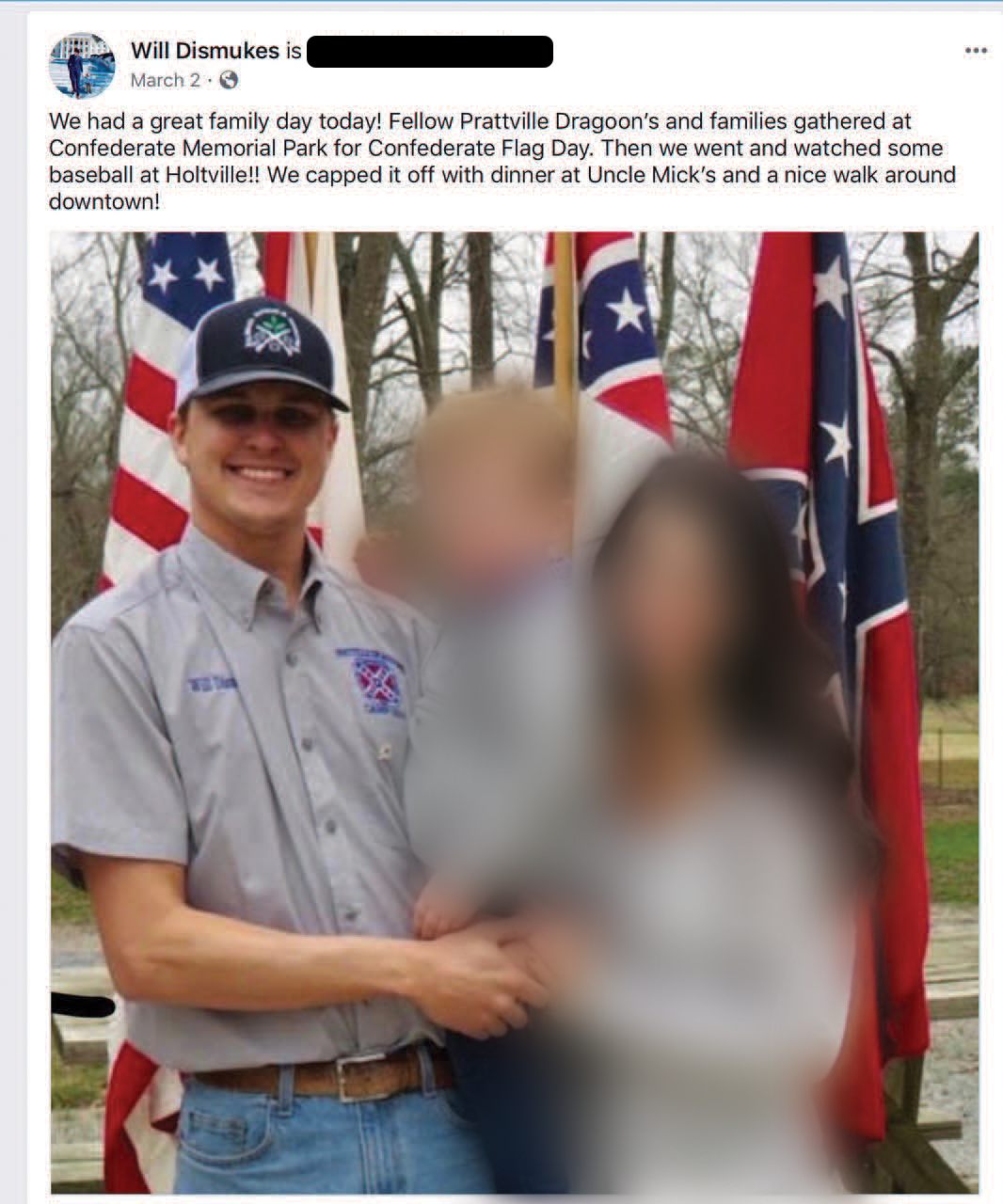 In the wake of the killing of George Floyd by a police officer in Minneapolis, protests against police brutality have resulted in calls for policies to address systemic racism and for Confederate monuments to come down, and across the South and in Alabama many have already been removed. Monuments in Mobile, Birmingham and Montgomery have come down.

The National Trust for Historic Preservation on Thursday released a statement calling for the removal of Confederate monuments, most of which the Washington D.C.-based nonprofit said “were intended to serve as a celebration of Lost Cause mythology and to advance the ideas of white supremacy.”

“Many of them still stand as symbols of those ideologies and sometimes serve as rallying points for bigotry and hate today. To many African Americans, they continue to serve as constant and painful reminders that racism is embedded in American society,” the nonprofit said in a statement.