Huntsville Chief of Police Mark McMurray told the Huntsville City Council on Thursday that his department’s response to protests earlier this month was meant to avoid violence and destruction of property that was anticipated based on intelligence reports and what was happening in other cities.

McMurray gave a detailed play-by-play of his decisions in a two-and-a-half-hour presentation that included social media posts by local “antifa sympathizers,” drone surveillance footage and explanations of the police gear and crowd dispersal weapons used.*Editor’s Note: This story has been updated to decapitalize the term antifa, which describes an unofficial group that shares a philosophy, goals and methods but no leadership hierarchy or organizational structure.

Responding to residents’ comments about “our stormtrooper police officers,” McMurray said that he replaced uniformed street officers with the riot-gear-clad Mobile Field Force on June 1 as the day’s peaceful assembly got “more and more riotous.” It is at night, he said, that “spin off” groups of protesters tend to become violent.

“The reason they wear the hard shells on the outside of their uniform — they wear plastic protective gear — is for their defense. It’s not offense,” he said. “It’s to keep them from being injured by things thrown at them in a disorderly conduct type situation.”

[A video of the city council meeting is available here.]

Huntsville police didn’t use the riot shields that were seen carried by other officers because those are meant for hand-to-hand combat maneuvers, McMurray said. His strategy prioritized maintaining distance from protesters in order to use as little force as necessary, he said.

Although officers apprehended a man seen brandishing a pistol in the crowd, McMurray called the June 1 demonstration a “great event” that could have ended on a good note. He showed a list of violations police had witnessed, from people blocking sidewalks and roadways to using language considered to be inciting a riot. But it was the failure to disperse for 46 minutes after an NAACP’s rally permit expired that prompted police to deploy non-chemical gray smoke. *Correction: This story previously stated that a curfew was in place in Huntsville. That was not the case. Police ordered protesters to disperse after a permit expired for an NAACP rally.

“It’s a smoke can, and our purpose was, let’s just see if that convinces them to leave. Let’s don’t put the CS [tear gas] on them first. Let’s just put some smoke. We’ll be gentle,” McMurray said.

Bottles were then thrown at officers, he said, so two cans of tear gas were deployed and the area was cleared of protesters.

With that experience fresh in memory, Huntsville police gathered an array of social media posts they deemed troubling, including some from people supposedly affiliated with the antifa movement. McMurray said that in his time on the gang squad, he learned that gang members and wannabe gang members were equally dangerous.

“They’re defaming my character with absolutely no evidence in a live stream city council meeting with the vaguest attempt at hiding my identity but telling everybody what city I live in,” the man, Benjamin Shapiro, told AL.com. Shapiro denied being an anarchist, a member of antifa, an antifa sympathizer and said he never attended any protests. 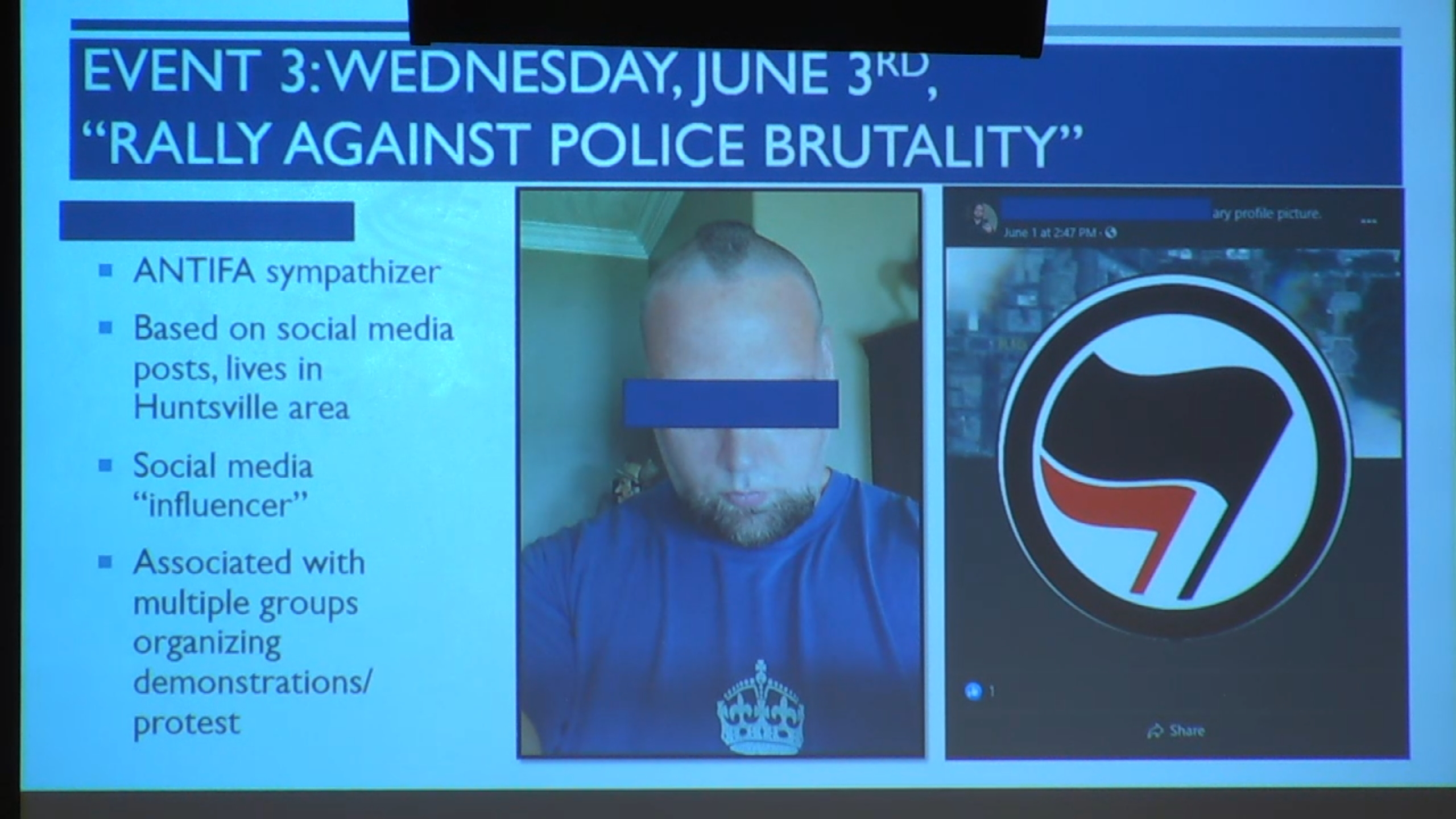 “So what’s the difference between an antifa and an antifa sympathizer who wants to be recognized in the gang? In the group?” McMurray said. “You put the title on antifa. I won’t.”

He said that the Bureau of Alcohol, Tobacco and Firearms provides intelligence on “all antifa members” in the southeastern U.S. antifa is short for anti-fascist, he said, and defined it as “a loose collection of groups, networks and individuals who believe in active, aggressive opposition to far-right-wing movements.” It comes from the anarchist movement, he said.

Demonstrators describe police action at Huntsville protest
Read accounts of the protest from demonstrators — in their own words.

Members can be identified by a host of symbols worn as patches or appearing on their social media pages, McMurray said, adding that liking one of their posts is enough to be tracked as an antifa sympathizer.

The antifa movement first appeared in Europe in the 1920s and 1930s in response to the rise of fascists there, according to the BBC. The American antifa movement has been traced to the 1980s, when a group called Anti-Racist Action formed to confront skinheads who were growing in influence in the punk music scene. It began attracting adherents again with the political rise of President Donald Trump and the alt-right.

The department was joined on June 3 by State Troopers and Madison County Sheriff’s Deputies. McMurray said he called in the State Troopers to protect against property damage to downtown Huntsville’s “valuable assets.”

The day’s events began amid heightened concern by police about an “organized antifa-like effort” based on various social media posts, including a diagram titled “Protest Roles” that McMurray displayed. It shows positions and tasks for protesters to take in a confrontation with police. It includes forming a makeshift shield line, filming police actions, placing medics for injuries and “range soldiers” who throw things when police advance.

McMurray said police identified 10 of the 13 roles on the diagram. 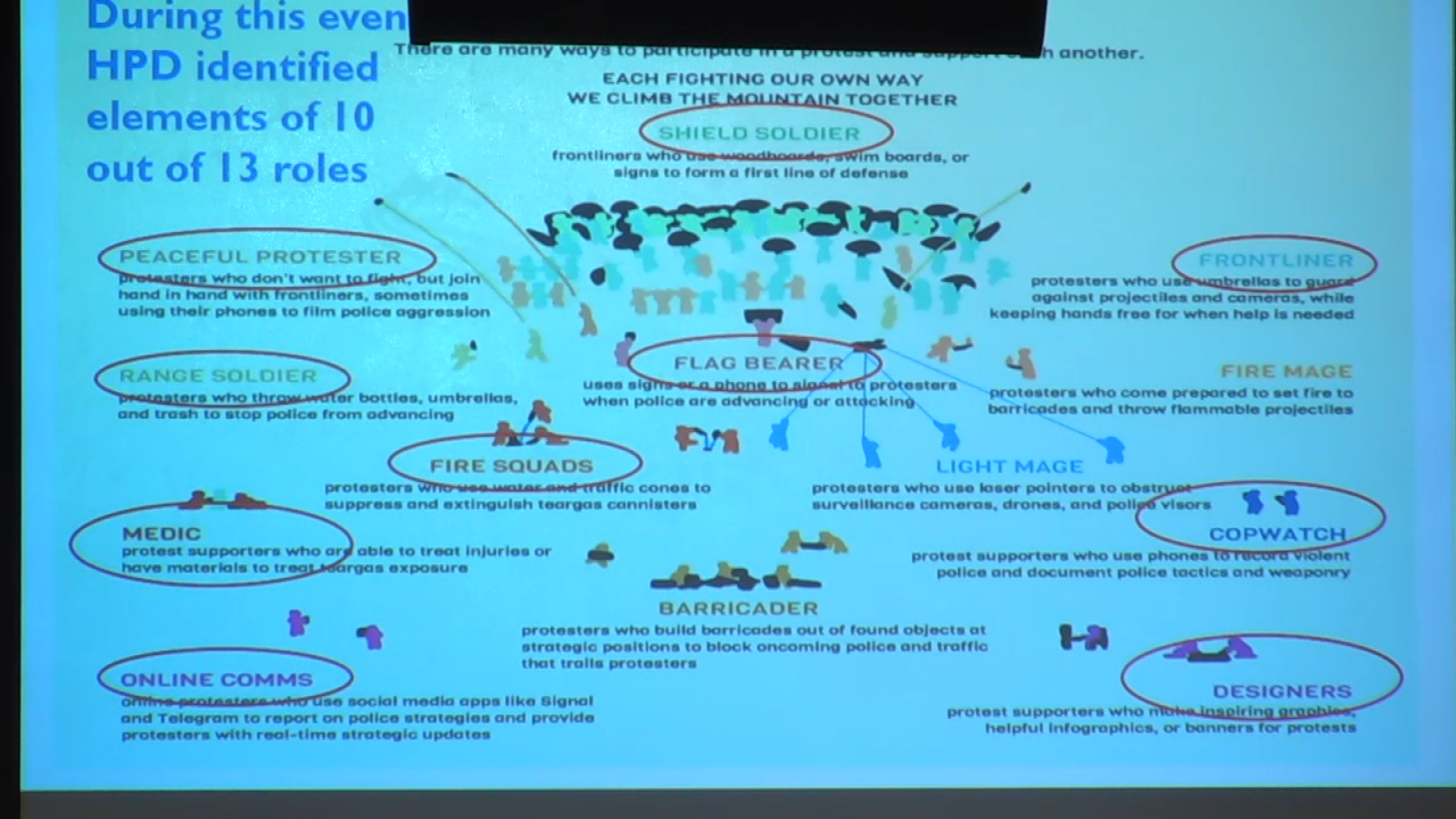 However, the diagram McMurray presented on Thursday has been connected to protests in Hong Kong. Most of the roles identified on the diagram employ defensive techniques.

When crowds did not disperse on June 3, things escalated beyond what occurred two days prior. McMurray attributed that to the level of organization protesters brought this time, which he said indicated a desire for a fight. He noted the setting up of aid stations just beyond where the advancing police line halted. He said their purpose was to keep people in the fight.

“That means they watched our activity from Monday, and they’re using counter-intelligence, and they’re actually setting up their aid station just outside where they think our perimeter is going to stop,” he said. “Do you see how organized they are?”

Protesters who were there that day have denied the police chief’s claims.

After the police advance stopped, the crowd split into separate groups. In McMurray’s analysis, the situation — which he watched via drones overhead — presented a risk that his officers were vulnerable to a potential flanking maneuver as they advanced toward the Confederate monument ahead of them.

After commands to clear the area, which McMurray said were numerous but which many demonstrators said they didn’t hear, the crowd had not left and nightfall was approaching. That meant further action was necessary, McMurray said.

“You can’t avoid that decision when you’re coming up upon an hour and a half of noncompliance,” he said.

When objects were thrown at officers, police started firing bean bag rounds. Shot from orange shotguns, those are typically fired at the ground near people throwing objects in order to scare them. McMurray reiterated that dispersal agents are used “so we don’t touch you.”

Thirty bean bags were fired that night, he said. Five of them hit people. Huntsville police don’t have rubber bullets and did not use them, he said. The Alabama Law Enforcement Agency says State Troopers were only present as backup support and did not fire any dispersants. Yet some protesters displayed injuries they said were from rubber bullets. One woman had bleeding holes in her legs.

McMurray addressed the complaint that protesters were boxed in with nowhere to go because officers were blocking exits. That was due to a miscommunication between agencies, he said, and he cleared an exit when he found out.

Regarding the testimonies of dozens of residents at a previous meeting, he said that they weren’t lying but they did not have a full view of the events of that day. By sharing the perspective of his department, McMurray said he hoped to help everyone understand why police did what they did.

Council President Devyn Keith said that perspective was indeed the core issue. He acknowledged that patience was exhibited by law enforcement throughout the protests but told McMurray to consider the perspective of the people in the crowds he disbursed on June 3.

The location of the protest was important to the context of what they experienced, he said. The county courthouse had been mentioned as the site of the protest several times during the meeting.

“Nobody cares about that ugly building,” Keith said. “It is a monument in the front that drew a crowd to converse about that monument, and that location became a synergy point.”

There were three law enforcement agencies seeing the protesters in different ways, he said. How and when they determined who their enemies were that night was when the rubber bullets came out.

Keith said that there will be people who “cry out in very uncomfortable and unfortunate ways” who need to be detained and held accountable.

Thanking McMurray for his presentation, Keith said he wished there was a presentation by all three agencies.

Councilman Bill Kling said that residents’ complaints about lack of transparency could be addressed by better communication between police and residents.

Keith called for an anonymous online portal for officers and residents to report police misconduct.

The council tabled two resolutions that would call for a review of the protests by the Huntsville Police Citizens Advisory Council. Those will be considered at the regular City Council meeting next Thursday.