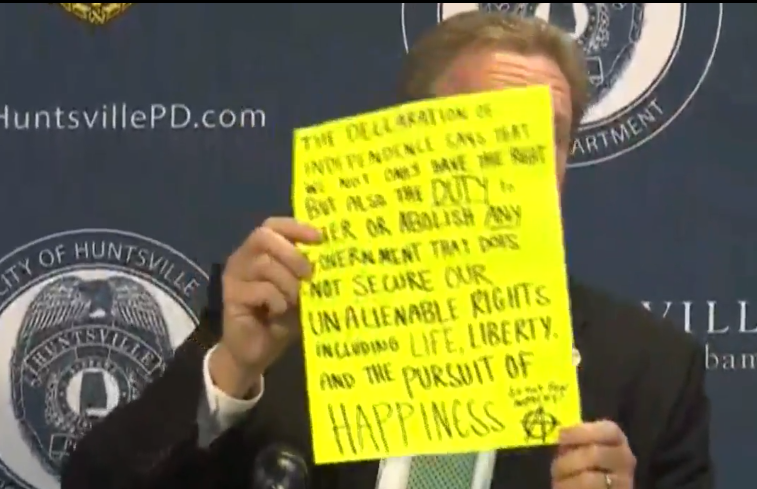 Huntsville's police chief holds up a poster a press conference that he claims to be from an Antifa group.

Huntsville Police Chief Mark McMurray told Huntsville City Council members that the use of crowd control weapons to prevent rioting in early June was based on information that indicated there were plans by agitators to do damage to the city.

McMurray said that those agitators appeared to be members of or sympathizers with the group antifa, a loose network of organizers and activists that grew out of the anarchist movement.*Editor’s Note: This story has been updated to decapitalize the term antifa, which describes an unofficial group that shares a philosophy, goals and methods but no leadership hierarchy or organizational structure.

Police arrested 24 people, none of whom were proven to be affiliated with antifa. McMurray said this was because the group’s members know how to avoid arrest and likely moved on to continue their activities in another city.

APR spoke to a member of Alabama Anti-Fascist Action, an online group that is part of the national antifa network. They agreed to speak anonymously about who they are, how they function and what they’re all about — and what they think of McMurray’s statements.

APR: Why do you want to remain anonymous?

Alabama Anti-Fascist Action: White supremacist groups and other extremists have a history of targeting antifascist activists and their families. Our network has received an uptick in threats of violence in the last few months due to the charged political environment and our involvement in doxxing members of Atomwaffen and League of the South. Because we live in a very conservative state with deep roots in white supremacy and neo-Confederate sentiment, Alabamian and Southern antifascists in general face some steeper challenges than other regions. We take our security very seriously to prevent individual activists from being doxxed. Given Chief McMurray’s recent conspiracy theories, we’ve chosen to tighten security at this time to also avoid police harassment.

What can you say about who your members are?

Activists within our network come from many different backgrounds, from salt-of-the-earth working class to veterans to people in professional fields to stay-at-home moms. While most of our activists are Leftists of various kinds, our specific network is founded on the principle that our individual politics are not more important than the goal of antifascist resistance, so we are willing to work with anyone who shares that value and a commitment to good praxis regardless of specific political slant.

At this time, there are antifa within every major city in Alabama, but we especially appreciate our rural activists out in the counties and small towns where white supremacist movements are more likely to recruit.

How does your network operate? What motivates its members?

All antifa collective efforts function differently and independently of each other. Our particular network could best be described as a loose collaborative exchange between antifa activists spread throughout the state. We collect and share information, assist each other with projects and concerns, and plan direct actions together when necessary. All individuals act as autonomous equals, we don’t appoint leadership or recognize hierarchy among the participants. As to what motivates us, here’s a statement from one of our folks that I think sums up how many of us feel:

“My great-grandfather died in a concentration camp. I exist right now because someone helped members of my family escape the Nazis. I think about that a lot, about the kids in the border camps and how some day we’ll have to answer for everything. When my great-grandkids hear about me, I want them to hear about someone like the German men who helped my family, not the Germans who did nothing. There’s a lot of talk of heritage these days. Antifascism is my heritage. It’s literally why I’m here.”

The goal of antifa isn’t to disrupt society, bully conservatives or meddle in status quo politics. We’re here because as long as there are fascist elements in our society – a militarized and over-utilized police force, for-profit prison industry, state sanctioned surveillance and violence against peaceful people, mistreatment and demonization of immigrants, unchecked and blatant white nationalism, and so on – someone has to be there to resist the progress of modern fascism and help protect vulnerable people in our communities. We’re just normal people who have decided that we will not stand by and watch history repeat itself.

Chief McMurray has repeatedly referenced antifa as central to the use of force by police under his command on June 1 and 3, citing intelligence gathered before the events and alleging participation by antifa agitators who avoided arrest. How do you view his comments?

We’ve been following the situation in Huntsville closely. First I would like to say that there were no antifa direct actions carried out at any of the protests in Huntsville and there were never any planned. In communicating with antifa in other states, we have found no evidence of any outside antifa involvement in the protests and in fact we find McMurray’s assertions to be bizarre and evidence that the chief doesn’t understand what antifa actually is or does.

While antifa often work to disrupt or counter-protest demonstrations by white nationalists, disrupting a peaceful protest condemning police brutality and exposing members of the local Black community to further police violence is completely against everything we stand for. It would serve no purpose. We would also like to state for the record that none of the people included in McMurray’s presentation are participants in our network or any other antifa groups that we are in contact with. They may be antifascist, as we all should be, but they are not “antifa” in the sense that they’ve been accused. We find it disturbing that the chief made only minimal attempts to obscure the identity of those individuals and effectively doxxed innocent people on a public broadcast, putting them needlessly at risk for harassment and violence.

All in all, it’s fairly obvious to us that Chief McMurray is either the victim of some sensationalized fear-mongering that has very little to do with the reality of antifascist activism, or may be trying to retroactively justify his decisions in order to paint them in a better light. With antifa being painted by Trump as a national boogeyman, it’s easy to fall prey to conspiracy theories.

McMurray characterized antifa as highly organized, and described the protesters the same way. He cited the presence of medics and aid stations as evidence of preparation for violent engagement with police, and he showed a diagram of protest roles that he characterized as a blueprint for it. Can you comment on these characterizations, and on how self-described antifa activists employ these or other tactics?

Individual antifa groups vary in degree and style of organization. Most, like ours, are only loosely organized. Highly organized groups are rare. Most antifa participate in other types of activism and have experience attending or organizing protests. The tactics referenced by McMurray are actually just common protest tactics that have been in use by hundreds of different groups and causes for decades, with some new developments that have come about due to technology and observations of the Hong Kong protests.

The infographic shared in the presentation is ubiquitous on the internet. Antifa groups do use some of the same principles when planning direct actions, but our style of activism is very different on the ground and so most of the tactics that McMurray covered are not useful to us.

First aid stations and medics have always been staples of protests, because people get hurt even under the best and most peaceful circumstances. Ankles get twisted, people get sunstroke or dehydrated, counter-protesters sometimes become violent. It makes sense to have people there who can dispense water and minor first aid to those who need it and to be on hand in case there is a serious emergency until paramedics can respond. Given that tear gas was used on the smaller group of protesters on June 1, it’s hardly surprising that people came prepared on June 3 just in case. Bringing first aid kits and protective clothing to a protest when the cops have already demonstrated a willingness to gas peaceful protesters is not provocation, it’s common sense.

It’s clear to us that the protesting public in Huntsville is capable of organizing among themselves without assistance from antifa or “outside anarchists.”

What is your view of police within the antifascist framework?

Attitudes towards the police vary greatly within antifascist circles, because there are so many different ideologies that overlap with antifascist work. The most common point of view and the one that is held by the majority of our co-op, is that it’s fruitless to argue about “good cops” and “bad cops,” because the police can only ever be as good and as just as the system allows them to be. In an unjust system, all cops are bad. They may be decent, well-meaning people outside of their working environment, but they still choose to put on a uniform and uphold a broken system every day. Every cop that shot at, gassed, or pepper sprayed a peaceful protester on 6/1 and 6/3 in Huntsville is someone’s “good cop” uncle, brother, father or son.

We believe that many of the problems are systemic. The police are over-utilized to deal with problems that should be handled by other professions and they’re not appropriately trained for those situations. Aggression and an environment of paranoia and us-versus-them mentality are cultivated.

Specific to antifascism and antiracism circles, we pay special attention to fascist elements within the police force including abuses of power and the large number of cops that have ties to white nationalism in many forces around the country, as well as the activities of ICE regarding the immigrant community.

We would not go as far as to call all police, as a whole, enemies of antifa, but we do not cooperate or collaborate with police while the justice system remains deeply rooted in corruption, white supremacy, unnecessary violence and toxic behavior.

What would you like concerned residents to know about you or your presence in the state?

Antifa is not a scary shadow organization. We’re not here to cause chaos or hurt innocent people. We’re your friends, family, co-workers and neighbors, and we’re here because we see the dark turn that events have taken in this country. We know from history where those paths lead and what happens when no one confronts fascism, rampant nationalism and supremacist ideology until it’s too late.

We want better than that for Alabama and for the American people. The nature of fascism is to separate us and pit us against each other until there is no one left to resist. Like the antifascist resistance movements of the early- to mid-20th century, antifa exists to make certain that wherever there is hate, oppression, state corruption and human rights abuses, there will be resistance. If you ever thought about Nazi Germany and thought, “I will never let that happen here,” you’re an antifascist.