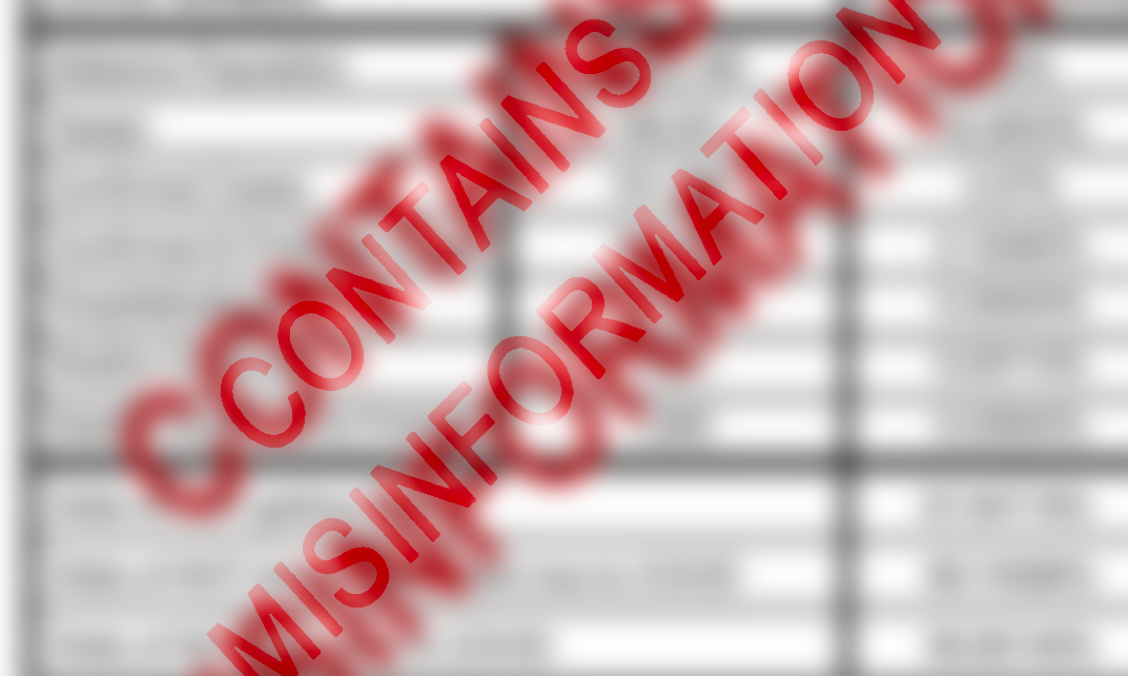 The Alabama Department of Public Health on Tuesday addressed misinformation about COVID-19 being spread on social media and wrongfully being attributed to the department.

A chart shared on social media had been misidentified as the work of the Alabama Department of Public Health, and purports to show the probability of getting coronavirus, being hospitalized with it or dying from it — but public health experts say the calculations are at the very least misleading and potentially dangerous.

It was unclear Tuesday who made the chart or why, but it has been circulated so widely on social media in recent days that prominent infectious diseases doctors in the state took notice and began to issue warnings about its flawed assumptions.

“It’s certainly not our chart or something we’d put out,” said Alabama State Health Officer Dr. Scott Harris told APR Monday evening. “It’s similar to charts we’ve seen around for the last five months. It has updated numbers. We’ve seen a lot of people cherry-picking the stats that prove whatever point they want to make. You just hope people realize that there’s a bigger picture.”

The chart uses Alabama’s total population, the number of confirmed COVID-19 cases, hospitalization and deaths to estimate the probability a person could get the disease, be hospitalized or die from it. Doing so is inaccurate, and doesn’t take into account the many factors that can make a person more susceptible to exposure, infection and possibly suffering severe outcomes, said Dr. Bertha Hidalgo, an epidemiologist and associate professor at UAB’s School of Public Health.

“And that risk changes over time,” Hidalgo told APR on Tuesday. “One of the things that we have really tried to communicate to the public is that it has been really important to keep our hospitals from overflowing, because your risk of dying due to COVID if you make it into the hospital may be greater if the hospital is overwhelmed.”

The chart doesn’t take into account the greater risks associated with a person’s age, or whether they have pre-existing medical conditions, both factors that can greatly increase a person’s risk from COVID-19, Hidalgo said. It also doesn’t take into account personal behavior that increases or decreases an individual’s risk of exposure and infection.

“If people don’t wear their masks. If our hospitals are overflowing. If you’re in a crowd. If you have preexisting conditions. There are so many factors that may affect what your risk may be,” Hidalgo said.

Those living in nursing homes and prisons are at greater risk from COVID-19 than those living outside such facilities, said Monica Aswani, assistant professor at UAB’s School of Health Professions.

Aswani said the chart makes it seem as if the risk is static and constant across time when that’s not the case.

“When people have raw data at their disposal, they’re susceptible to picking and choosing the numbers that speak to the narrative they already believe to be true,” Aswani said. “Sometimes it can be intentional, but more often it is unintentional cherry-picking, which leads to confirmation bias.”

What worries her, Aswani said, is that people will read such a chart and internalize the data as their own individual probability of risk and make decisions that could put them and others in harm’s way.

ADPH in a tweet Tuesday warned the public about the chart, which the department says uses data incorrectly.

“The table below is circulating. We would like to make it abundantly clear that this table was not published by the Alabama Department of Public Health. To be as transparent as we can be, we have provided data to the public on our Data & Surveillance Dashboard,” the department’s tweet reads. “Unfortunately, that means that data can be used and misrepresented by others. Using these data in an incorrect manner creates erroneous assumptions. We do not agree with the presentation of the data in this table, nor do we support any of its conclusions.”

In subsequent tweets, ADPH explained that whoever made the chart incorrectly used the state’s total population to make inaccurate estimates of individual risk.

“A lot of this, to me, is rooted in fear,” Hidalgo said. “People need answers to address the fears that they have about why we can’t go do all of the things that we’re used to doing.”

She also worries the chart doesn’t show the other outcomes that many of those with COVID-19 have faced, such as severe disabilities and long-term health effects including lung and heart damage, Hidalgo said.

“Our brains follow these paths of least resistance, is how I explain it,” Hidalgo said. “And so it’s easy for people to sort of latch on to these conspiracy theories because in many ways they feed the insecurities and the fears that people have.”

“I suspect the average person is being bombarded with information and statistics – often conflicting – and is unsure what to believe,” Aswani said. “Since they have access to these numbers, such as population, cases, and deaths, they likely feel more empowered to contend with all of this uncertainty if they can calculate and interpret their own risk. It is concerning, however, when flawed statistics are widely circulated without context.”