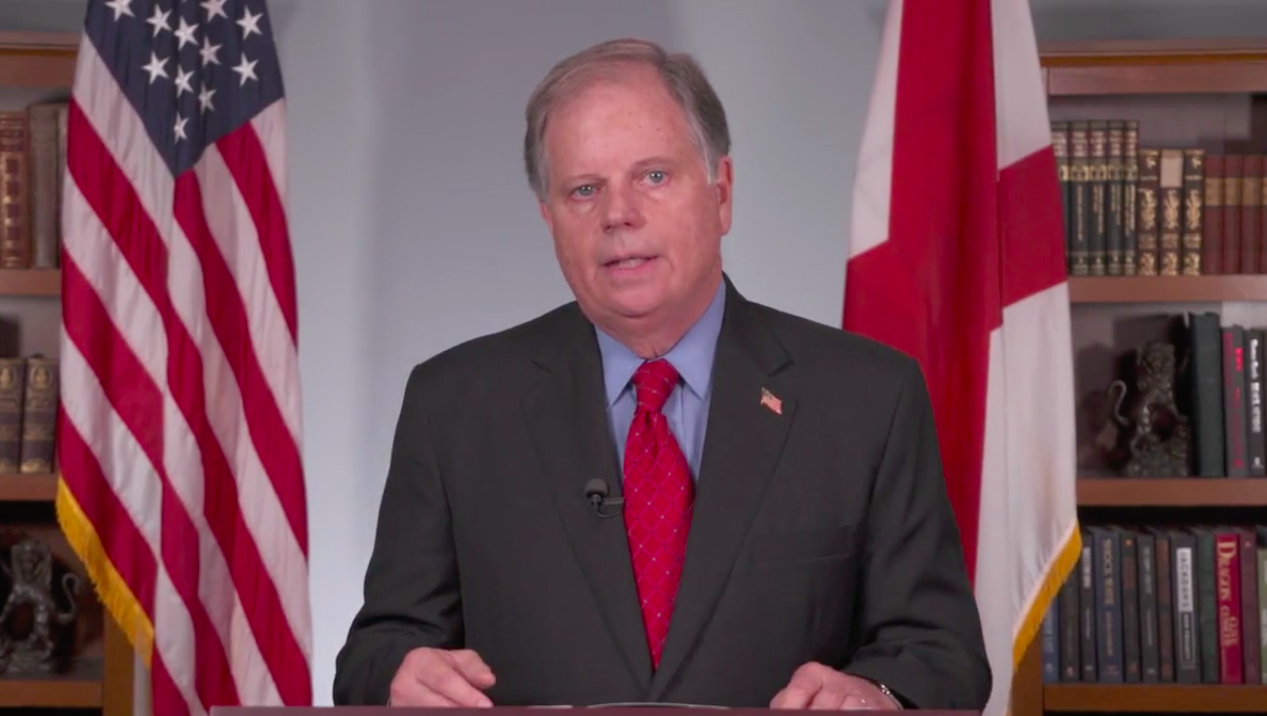 Sen. Doug Jones, D-Alabama, on Friday said he would not support any nominee to the U.S. Supreme Court before the outcome of the Nov. 3 election is determined.

Speaking during a livestreamed briefing, Jones said that while Republicans appear to have enough votes to replace the late Justice Ruth Bader Ginsburg, he will not be a party to denying the people a voice in the process in the election of the next president “in just under 44 days.”

President Donald Trump said Saturday that he plans to nominate Amy Coney Barrett to replace Ginsburg, who on Friday became the first woman, and first Jewish person, to lie in state at the U.S. Capitol.

Several Republicans who voiced opposition to President Barack Obama’s nomination of Judge Merrick Garland to the Supreme Court more than 10 months before the 2016 election have reversed course, and now say they support Trump nominating a selection with election day just a little more than a month away.

“Certainly, power grabs are not uncommon in our political system, but few are accompanied by such blatant hypocrisy as we are witnessing now,” Jones said. “In fact, I believe that the level and intensity of hypocrisy being displayed by Senator McConnell and the president, with regard to the rush to confirm Justice Ginsburg’s successor, is unmatched in the history of our constitutional government.”

Jones said what McConnell and other Republicans should be focusing on instead is getting another round of much-needed COVID-19 aid to small businesses and people impacted by the pandemic.

“Rather than pushing this confirmation to the top of the Senate calendar, the majority leader should turn his focus instead to protecting the lives and livelihoods of the American people. We should pass a new bipartisan COVID-19 stimulus package to give Americans and businesses the relief that they desperately need, and that economists say if required to shore up the economy now,” Jones said.

Jones expressed concern as well for what medical experts are warning could be a new spike in COVID-19 nationwide.

“There could be an even greater urgency, if our health care professionals’ warnings come to pass,” Jones said. “And that is as temperature drops and people go indoors that this virus spikes, and we see another surge.”

“He has no clue. He is Coach Clueless,” Jones said.

Jones noted that when asked recently on his thoughts on extending the John R. Lewis Voting Rights Act of 2020, Tuberville stumbled through an answer that indicated he wasn’t sure what the Voting Rights Act was.

“He had no earthly idea,” Jones said.

Jones said Tuberville isn’t going to debate him because Tuberville doesn’t want to talk about issues.

“He doesn’t want to talk about a plan. His plan is simply this: Whatever Donald Trump says, I’m good,” Jones said, “and if Donald Trump says or does something that is not good, it’s crickets coming from Coach Tuberville.”

Jones noted that after multiple news outlets, including Fox News, confirmed reporting that Trump had said disparaging things about veterans who died in combat, Tuberville has not spoken out against Trump’s comments.

Jennifer Griffin, senior national security correspondent for Fox News, reported that she has spoken to senior U.S. officials who backed up reporting by The Atlantic, and said Trump said of the Vietnam War “anyone who went was a sucker.”

“He has not said a thing about what was confirmed by Fox News about the president’s comment,” Jones said of Tuberville. “That’s just disgraceful.”

McConnell is seen by some more conservative Republicans as not conservative enough, which could spell trouble for Brooks.

Nearly $3 millon in renters assistance given out to Birmingham residents

$2.6 million in renters assistance has been directed to more than 530 Birmingham residents.

The high court said congressional action would be required to prevent renters from losing their homes in the midst of a pandemic.