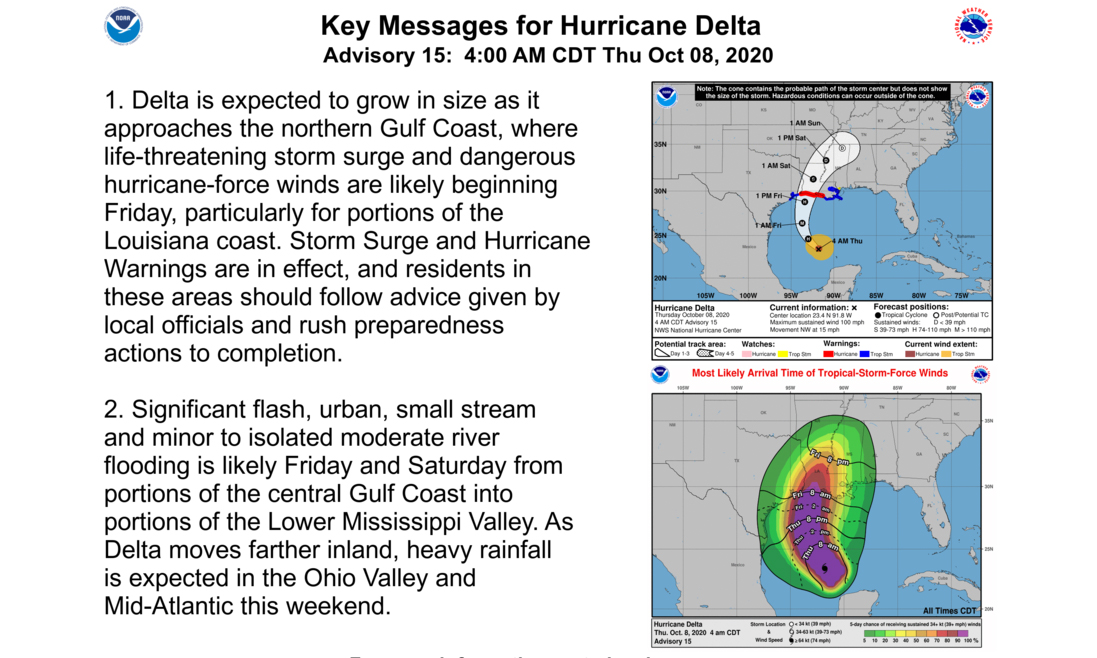 Hurricane Delta appears to be continuing on a route toward the Louisiana coast. While Delta lost strength when it hit the Yucatán Peninsula, it is gaining strength again now that the storm is back over open water and is predicted to return to category four strength today.

It now appears that Delta has taken a more westerly course, striking western Louisiana. If that track continues, then Delta’s effects on Alabama’s Gulf Coast will be much more limited than in some earlier forecasts.

Friday will be a cloudy day with showers possible, especially during the afternoon hours. Showers become more widespread Friday night as Hurricane Delta moves into the western Louisiana coast.

Saturday will be breezy as Delta moves through Mississippi, before coming across North Alabama. Birmingham meteorologist James Spann with ABC 33/40 forecast that rain amounts will be heavier across the northwest corner of the state; Muscle Shoals could see two to three inches. Totals will be around one inch for places like Tuscaloosa, Birmingham, Gadsden and Mobile, and under one inch over East and Southeast Alabama.

Isolated tornados are a possibility as the remnants of Delta move into Alabama.

“Keep in mind tornadoes associated with tropical systems are usually brief and hard to detect since they are low topped and often literally under the radar,” Spann explained. “But be weather aware Saturday and have a way of hearing warnings if they are needed.”

Spann is forecasting that the rain will end from southwest to northeast during the day Sunday.

Delta is producing rough boating conditions and the possibility of dangerous tides on the Alabama coast, but the state appears to be well out of the range of severe storm surge.

Gov. Kay Ivey has already ordered the evacuation of visitors and tourists for coastal Alabama and flood prone areas in Baldwin and Mobile Counties. At this point, it does not appear that an evacuation of the residents will be needed.

As coastal Alabama saw with Hurricane Sally last month, tropical storms and tornados can and do change course. To this point, Delta has tracked farther from Alabama but residents should continue to monitor weather forecasts closely for updates.

The Alabama Gulf Coast is still in the process of recovering from Hurricane Sally, which came ashore on Sept. 15 near Gulf Shores.