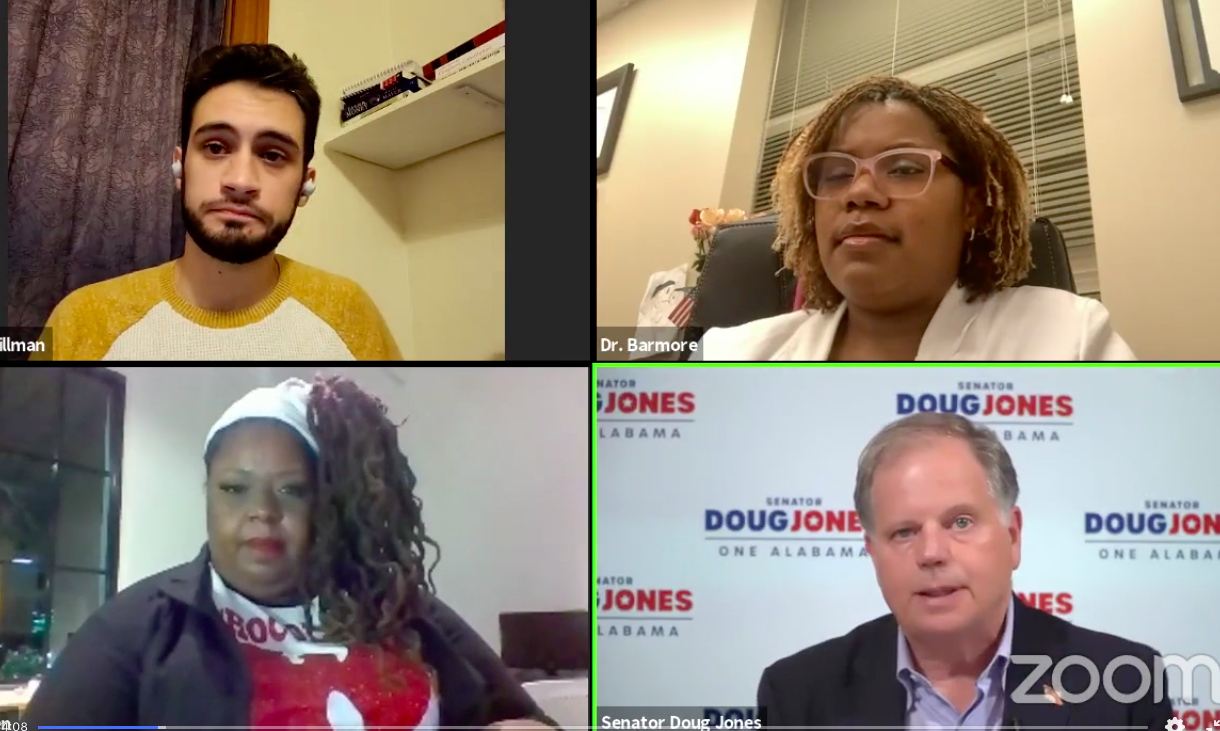 The Affordable Care Act is under attack, said Sen. Doug Jones, D-Alabama, on Wednesday, speaking during an online roundtable to discuss the landmark legislation.

“And again, we find ourselves defending it in the courts,” Jones said, during the Facebook Live video.

The U.S. Supreme Court on Nov. 10 is to hear arguments in a case brought by the Trump administration and a slew of Republican state attorneys general, including Alabama Attorney General Steve Marshall, challenging the constitutionality of the Affordable Care Act.

Jones said Republican lawmakers have tried numerous times unsuccessfully to do away with the ACA, and now hope the courts will do what they couldn’t.

“When I talk about protecting the ACA I want everyone to understand this is not theoretical. This is not abstract. This is real life,” Jones said.

Jones was accompanied in the roundtable discussion by three people, each impacted positively by the ACA. Among them was Joshua Hillman from Prattville, a University of Alabama graduate and law student at Harvard who was born with cystic fibrosis.

“You never really know what’s going to come up,” Hillman said of his medical condition. “Whether it’s sinuses, your lungs, insulin. Anything.”

With those unexpected hospital stays and numerous medications, some rare and experimental, comes the cost, Hillman said.

“Before the ACA, it was possible for people to not only be denied coverage, just for having cystic fibrosis, something that you’re just born with. Even if you’re lucky enough to get coverage, you could run up those price tags pretty quickly,” Hillman said.

Hillman said the ACA helped prevent his family from “having to make, to the extent they would have, some incredibly hard choices.”

“And it’s let me and my brother stay on our parent’s insurance plans throughout college, and not forced you to immediately have to go out and find a first job to get paid simply because it offers healthcare coverage,” Hillman said.

Dr. LaShelle Barmore, who runs a family medical practice in Trussville, speaking during the roundtable said she also specializes in treating those with diabetes, and is herself a type 1 diabetic, having been diagnosed as such since she was 2 years old.

Prior to the ACA, many diabetic patients couldn’t get the regular quality care they needed, which resulted in costly hospitalizations.

“Not only just thinking of the lives lost and things of that nature, the bottom line is that underinsured and uninsured patients are the ones that are making health care costs be so significantly high,” Barmore said.

Prior to the ACA, when Barmore was attending medical school in Kansas City, she lost her health insurance.

“And I’m an insulin pump user and was not able to continue my insulin pump usage because supplies were not affordable without insurance,” Barmore said. “And as a result of that, trying to just scrape by, I was using samples of insulin that I was getting from my professors.”

Because of the variability of her treatments, Barmore said she had two hypoglycemic seizures during that time.

“So the bottom line is I get it, I get what my patients are going through and the fears that they have, if the ACA were to go away,” Barmore said. “And I just am prayerful and hopeful that we will be able to maintain this, because it’s made all the difference.”

Ty Burden from Mobile said during the discussion that she was diagnosed with asthma when she was 6 months old, and throughout her life has struggled with breathing problems. As an adult, she could never afford health insurance, and a trip to the doctor could cost her nearly $300, so instead, she’d go often go without an inhaler.

“There was a serious asthma attack where I ended up passing away in the ambulance. They brought me back, and I was in a coma for three days,” Burden said. The incident resulted in her becoming thousands and thousands of dollars in debt due to the medical bills, she said.

“The ACA makes such a difference in my life and in my family’s life, because I had a chance to live again,” Burden said.

Jones said he’s seen the political blow back the ACA got “because it was tied to President Obama. It was called Obamacare, and that created a partisan divide.”

Jones encouraged the public to share their own stories about the ACA on social media using the hashtag #alforaca.

“I hope that people listening to this will really take to heart what this ACA means. What we take for granted,” Jones said.