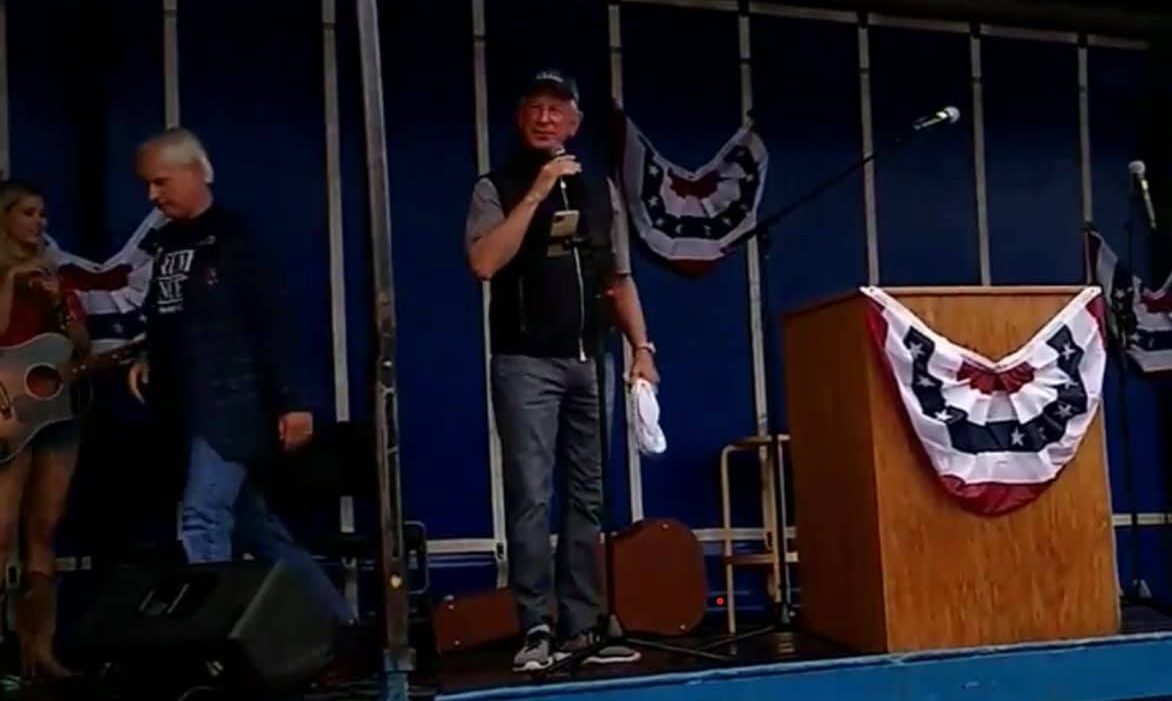 On Saturday, hundreds of pickup trucks decorated to honor America, law enforcement, the military and the re-election of President Donald Trump trekked from Ashland, Alabama, through the state of Georgia, to Phenix City.

There, Republican Senate candidate Tommy Tuberville delivered the keynote address to the gathered crowd of Trump supporters at the Phenix City drag strip.

Tuberville told the crowd that the most important thing to do in this year’s election is to re-elect Trump. Tuberville also pleaded with voters to elect him to the U.S. Senate.

“It’s time Alabama sent Doug Jones packing so he can move to California and live among his campaign supporters,” Tuberville continued. “I’m excited about the confirmation of Judge Amy Coney Barrett to the Supreme Court and the promise it holds for our nation. Her presence on the court opens the door to finally overturning Roe versus Wade, securing our religious freedoms, protecting our gun rights, and interpreting the Constitution with the original intent of our founding fathers.”

“We need more justices like Amy Coney Barrett and less senators like desperate Doug Jones,” Tuberville concluded. “With your help and God’s blessings, Alabama can reclaim its U.S. Senate seat from the liberals and put our state back in the Republican column on Nov. 3. God bless Alabama, and God bless the United States of America.”

Sen. Kelly Loeffler, R-Georgia, addressed the group remotely from Washington D.C., where the Senate was meeting on the confirmation of Trump appointee to the U.S. Supreme Court Amy Coney Barrett.

“I am so excited to be speaking at the Trump truck parade. Thank you for joining us today. I wish I could be with you, but I am in Washington making sure that we confirm Amy Coney Barrett. She is a strong constitutionalist. She’ll uphold our First Amendment rights our Second Amendment rights, she will protect the unborn, and she will protect our way of life to make sure that future generations can live the American dream.”

“That is why I am fighting so hard for President Trump to get him re-elected for another four years and keep our country great,” Loeffler added.

Jack Brewer, the co-chair of Black Voices for Trump finance committee, said, “I can’t tell you how excited I am about these next nine days that we have before election day. Keep on pushing. Let’s show the world. Let’s continue to spread the word about our amazing President. We all know what we are fighting for. We know are fighting for the soul of our nation. To put God back in our schools, to put God back in our government and start getting back to the time when we could praise the name of Jesus out loud. Georgia we need you. Continue to keep spreading the word. Don’t take any votes for granted. We all know that we are going against the mainstream media that just wants to bash our President and put out lies and deceit throughout the airwaves. We need to take a stand. Most importantly We need to take a stand for the word of God.”

“We are going to change this country,” said Brewer. “We have a President that’s already created the best economy the world has ever see. He will do it again. We will get past this virus, and then we will all come together and have unity again. We are all on the same team.”

Wellborn, the president and CEO of the largest family-owned kitchen cabinet manufacturer in the U.S. were among the featured speakers.

Entertainment was provided by the singing McGill Girls, professional DJ Geoff Carlisle and Charity Bowden, an up and coming country music singer who was the runner-up on “The Voice” who sang “I am Proud to be an American” as well as hit songs from her performances.

The event concluded with a drag race finale where the Trump truck easily defeated the Biden truck.

The election will be Tuesday, Nov. 3.