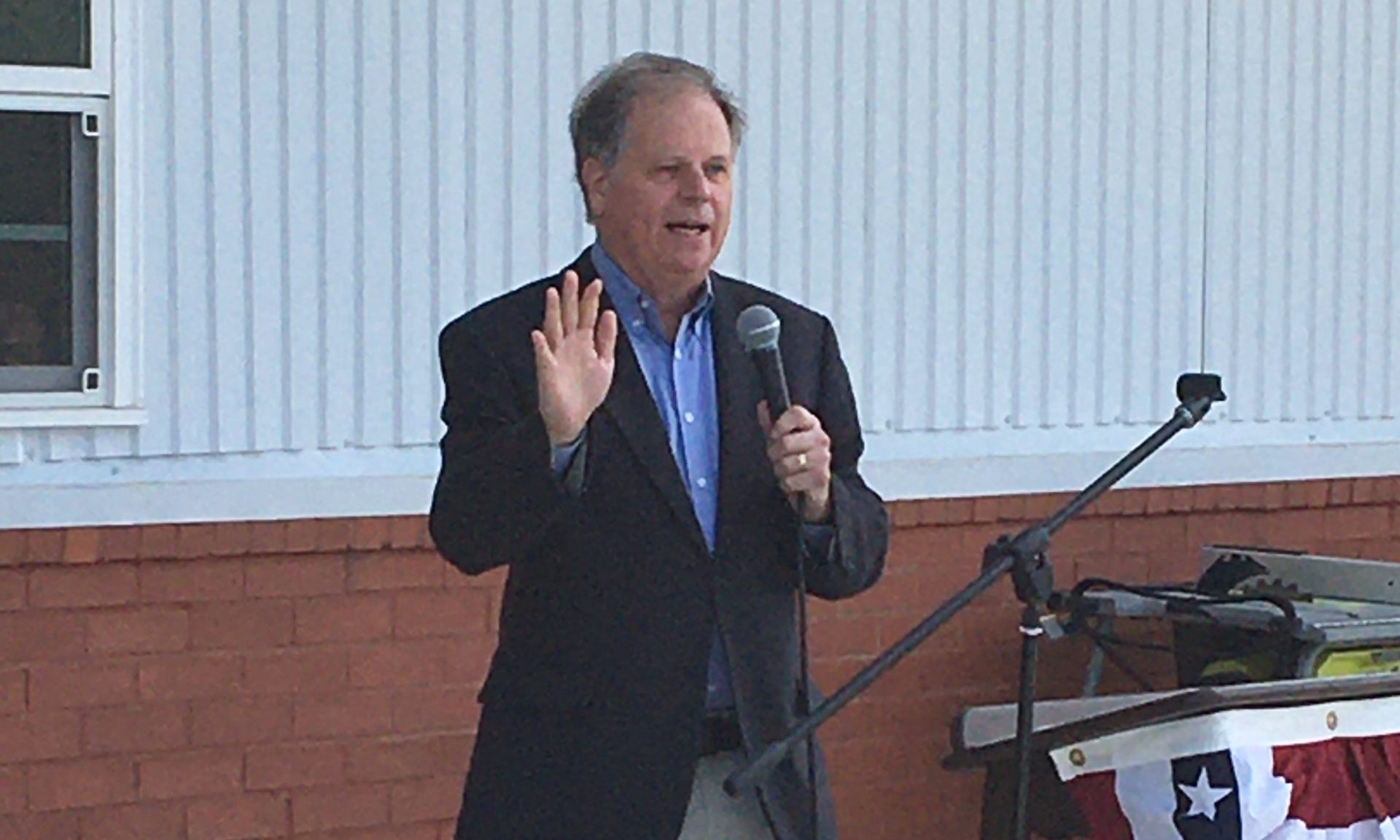 Speaking outside the Calhoun County Democratic Party headquarters in Anniston on Friday, Sen. Doug Jones, D-Alabama, told a group of supporters that Alabamians haven’t gotten a look at what his Republican opponent might do if he wins the Nov. 3 election.

“One of the great disappointments in this campaign is that Alabama is not really getting choices between substance and substance,” Jones said. “They’re getting a choice between substance and leadership, and nothing — nothing. We have not heard anything from Tommy Tuberville about what he really wants to do.”

While Jones has held numerous interviews with the media, and regular web briefings over the summer and in recent weeks, Tuberville’s campaign seems to prefer the safety of keeping Tuberville from making possible gaffs or damaging statements in interviews.

Tuberville hasn’t agreed to interviews with traditional media outlets, or to debate Jones, and instead has focused on conservative talk radio spots, speaking to smaller Republican groups and at private parties.

Tuberville’s campaign has ignored or denied our numerous attempts to interview Tuberville, including another request on Friday. He also declined to attend a student forum held at Auburn University on Wednesday, which Jones attended. The forum was sponsored by the Auburn College Republicans and College Democrats.

“If you ever hear something Tommy Tuberville says, it is just simply this: ‘Build a wall. No amnesty. Drain the swamp.’ That ain’t him. That’s Donald Trump,” Jones said. “He cannot think for himself. He doesn’t think for himself.”

“I don’t just create charities and send only pennies on the dollar. I do things for the veterans of this state and this country,” Jones said.

Jones also made a case for Alabamians to remember the contributions past Democrats made in the state. Jones said it was Democratic Sen. John Sparkman who helped build Alabama’s Redstone Arsenal.

“It was a Democrat, Lester Hill, who built the rural hospitals around here that Donald Trump and Mitch McConnell and Tommy Tuberville are trying to destroy,” Jones said. “It was Howell Heflin who built up agriculture in this state. Those are the Democrats. It was Franklin Rosevelt that put electricity in this state. We’re going to do the same thing for broadband. People forget those things. They forget those things because we’ve let other people define us with lies.”

Jones plans to visit Jefferson County on Saturday, then on to the Black Belt and Mobile on Sunday with another stop in Birmingham on Monday afternoon. 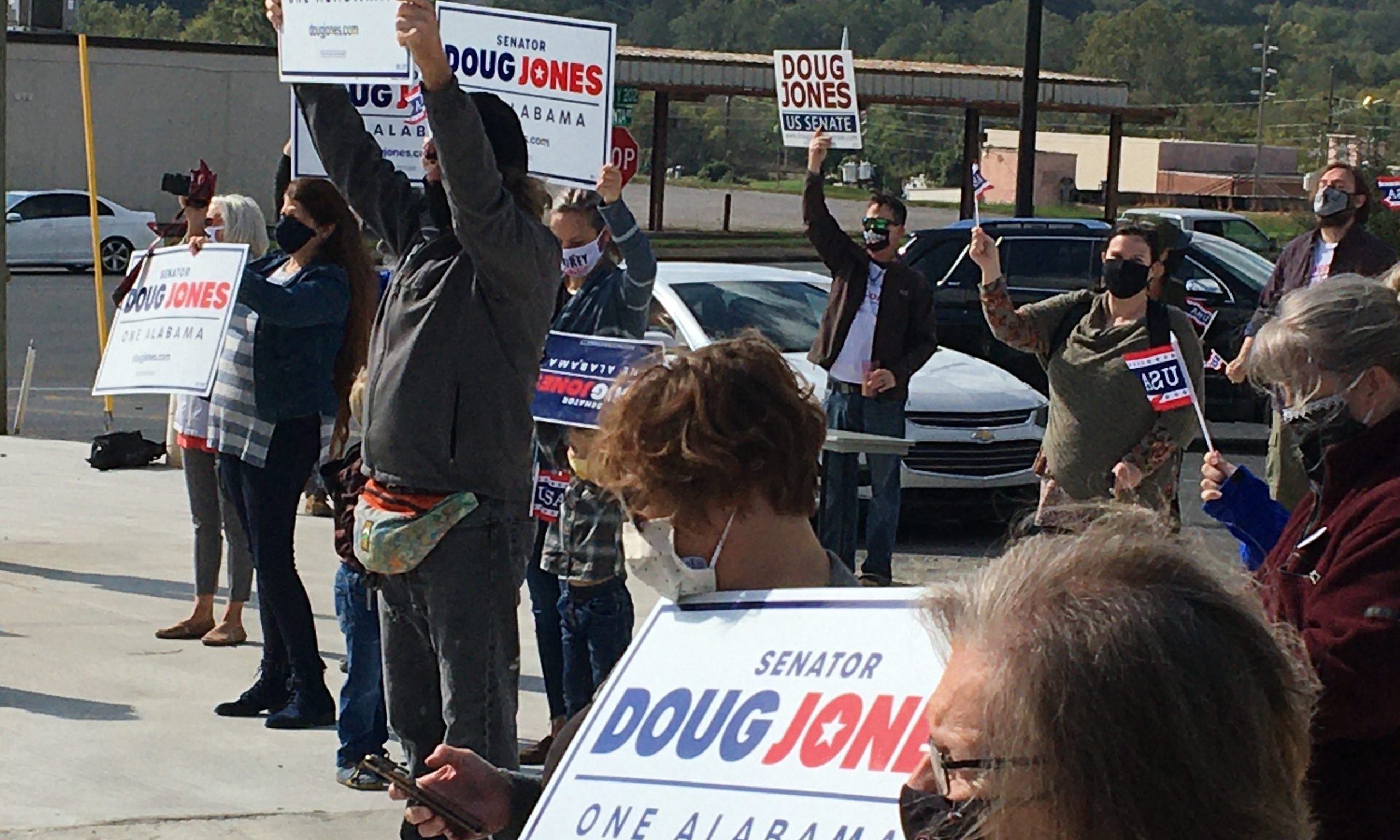 “We’ve had too much of that in Alabama,” Jones said, “and I bet you it won’t be a year that Tommy Tuberville would be an embarrassment to this state because he doesn’t know the issues. He doesn’t know what to do, and he’s dang sure not going to know what to do when Donald Trump is not president of the United States.”

People standing along roadsides holding his signs and showing support, Jones said, is “the energy we’ve got out there. That’s what you can’t poll.”

Ellen Bass of Anniston, standing outside the Calhoun County Democratic Party headquarters just after Jones spoke, told APR that she has numerous Republican friends who are voting for Jones.

“My hat’s off to them because they’re coming out,” Bass said. “They recognize that he is a better candidate.”

Ciara Smith, 21, newly elected to the Anniston City Council, told APR outside the headquarters building that Jones is the better candidate.

“I think that he’s educated. I think that he speaks with passion and heart,” Smith said. “And he knows what he’s talking about, which is important, and which is more than we can say about the other candidate.”

Speaking to APR after his speech to supporters, Jones said that he feels very good about the state of his campaign.

“Everything we’re seeing is moving in our direction,” Jones said. “And the more he stays hidden, the better it is for us.”

Sponsors say the bill is designed to improve Head Start by eliminating bureaucracy and giving money directly to states.