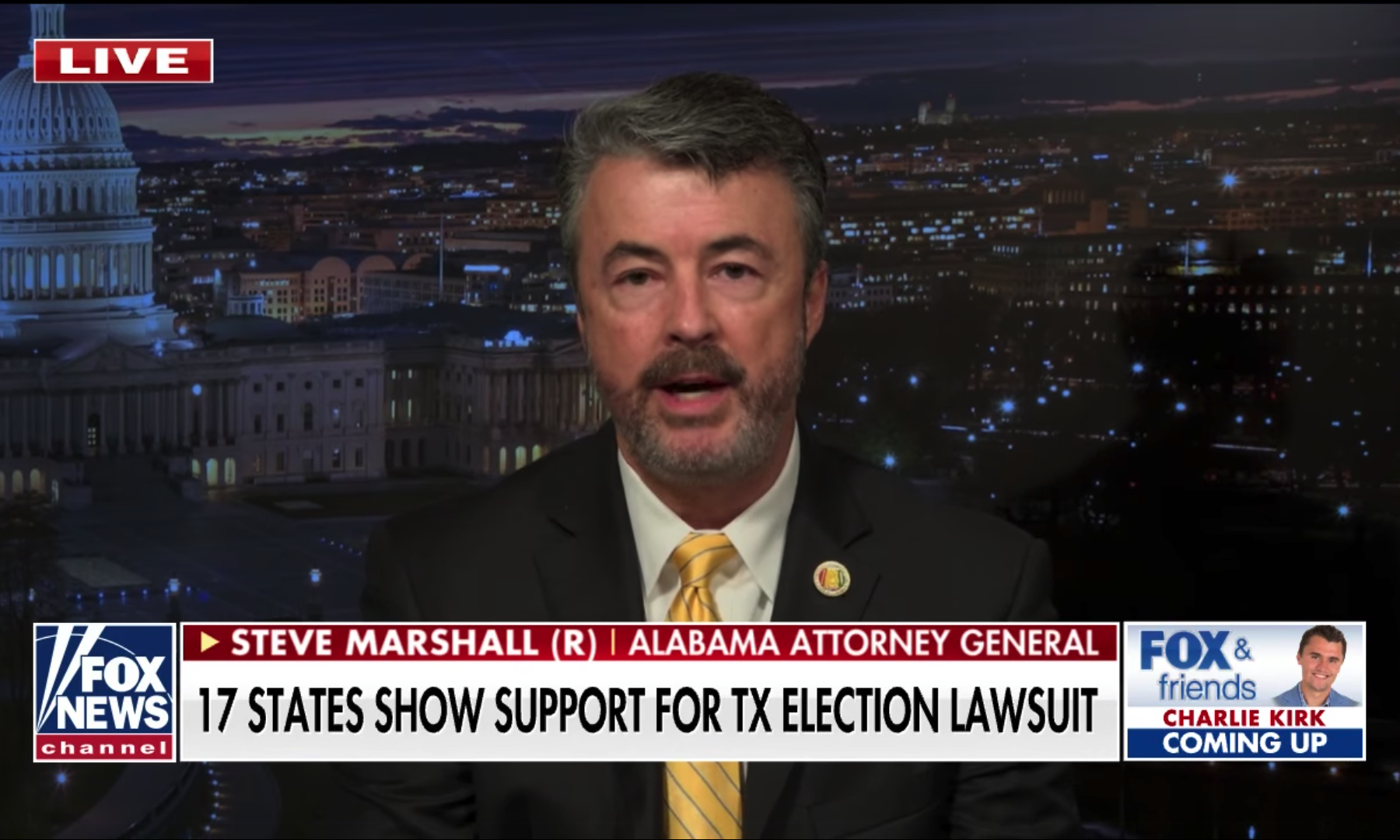 Appearing on Fox News’ “Fox and Friends” morning show, Marshall explained, with little specificity, why he believes the case should be heard or why Alabama joined.

“One of the things we hope, with 17 of our colleagues coming together is that the court understands the significant importance of this,” Marshall said. “All we’ve asked is that only legal ballots be counted. Texas has presented a very compelling argument that compels the court to take this case moving forward, and we’re to support the fact that this needs to be considered.”

It was great to join @FoxAndFriends this morning, where Louisiana @AGJeffLandry and I talked with Brian @Kilmeade about our support of the #TexasLawSuit and why the irregularities in this year’s election warrant Supreme Court review. Watch ⬇️ pic.twitter.com/QHJQK3WtIO

The lawsuit is widely viewed by legal experts as little more than a publicity stunt. One Republican senator, Ben Sasse of Nebraska, told the Washington Examiner that the lawsuit was so poorly designed from a legal standpoint that it seemed to be Texas AG Ken Paxton’s effort to curry favor with Trump in hopes of receiving a pardon. Paxton is currently under indictment for securities fraud.

“I’m no lawyer, but I suspect the Supreme Court swats this away,” Sasse said. “From the brief, it looks like a fella begging for a pardon filed a PR stunt rather than a lawsuit—as all of the assertions have already been rejected by federal courts and Texas’ own solicitor general isn’t signing on.”

In fact, Sasse is correct, and all of the legal assertions made in the lawsuit have already been adjudicated in a variety of courts, including the U.S. Supreme Court turning down the same challenge to Pennsylvania’s election changes.

At the heart of the lawsuit is this premise: the four states being sued — Georgia, Pennsylvania, Michigan and Wisconsin — opted to change their election rules in order to make voting easier or safer due to the coronavirus pandemic, and they did so mostly without going through their state legislatures.

“One of the things you realized is that non-legislative actors basically modified election law in the midst of the game,” said Louisiana AG Jeff Landry. “It’s like changing the rules of the football game in the middle of the game. According to the Constitution, we don’t believe it’s proper.”

The U.S. Constitution is less relevant in this instance and offers no guidance on how each state should establish or change election laws and rules in their states. Each state is set up differently, with the laws of those states establishing how and when election rules and regulations might be changed, and who has the authority to change them.

In some states, legislative authority is required to make certain changes. However, there are broad exceptions to this requirement in most, if not all, of those states, that give secretaries of state, governors and even attorneys general authority to make changes in certain instances, including during declared states of emergency.

In Alabama, for example, Secretary of State John Merrill — without approval from the governor and using Alabama’s exceptions — made a sweeping change to this state’s election rules, allowing citizens to use COVID-19 concerns as a valid excuse for absentee voting. That change essentially allowed Alabama to have a default mail-in voting system.

In addition, Gov. Kay Ivey used her powers during a health emergency to further change election regulations in the state and allow the counting of what was an unprecedented number of absentee ballots to begin at 7 a.m. instead of waiting until after noon as the law typically requires.

Those changes in Alabama are not significantly different than the changes made in the four states being sued, most of which dealt with allowing ballots properly mailed on time to be counted after Election Day due to lengthy delays in U.S. Postal Service delivery in some states. (Alabama allowed the counting of some absentee ballots up to a full week after Election Day.)

While Marshall’s decision to enter the lawsuit was cheered by some Republicans in the state, some avoided the topic altogether. Late on Thursday afternoon, a number of GOP House members, including Alabama’s Mo Brooks, Bradley Byrne and Gary Palmer, also joined the lawsuit as individuals. Reps. Martha Roby, Robert Aderholt and Mike Rogers did not, though Aderholt has said he is in the process of joining the lawsuit.

Alabama Democrats, in the meantime, blasted Marshall for “pandering” and ADP chair and State Rep. Chris England took to Twitter to point out the hypocrisy of Marshall joining a lawsuit for the same actions taken by officials in his state.

“Counting votes that were received after Election Day? Alabama does that,” England wrote. “We counted votes for several days after Election Day. Change election law without legislative approval? We did that too. Hell, we set absentee voting records because of it. But hey, don’t let the facts and the law get in the way of some good old-fashioned pandering. Apparently, the AG has plenty of free time on his hands.”