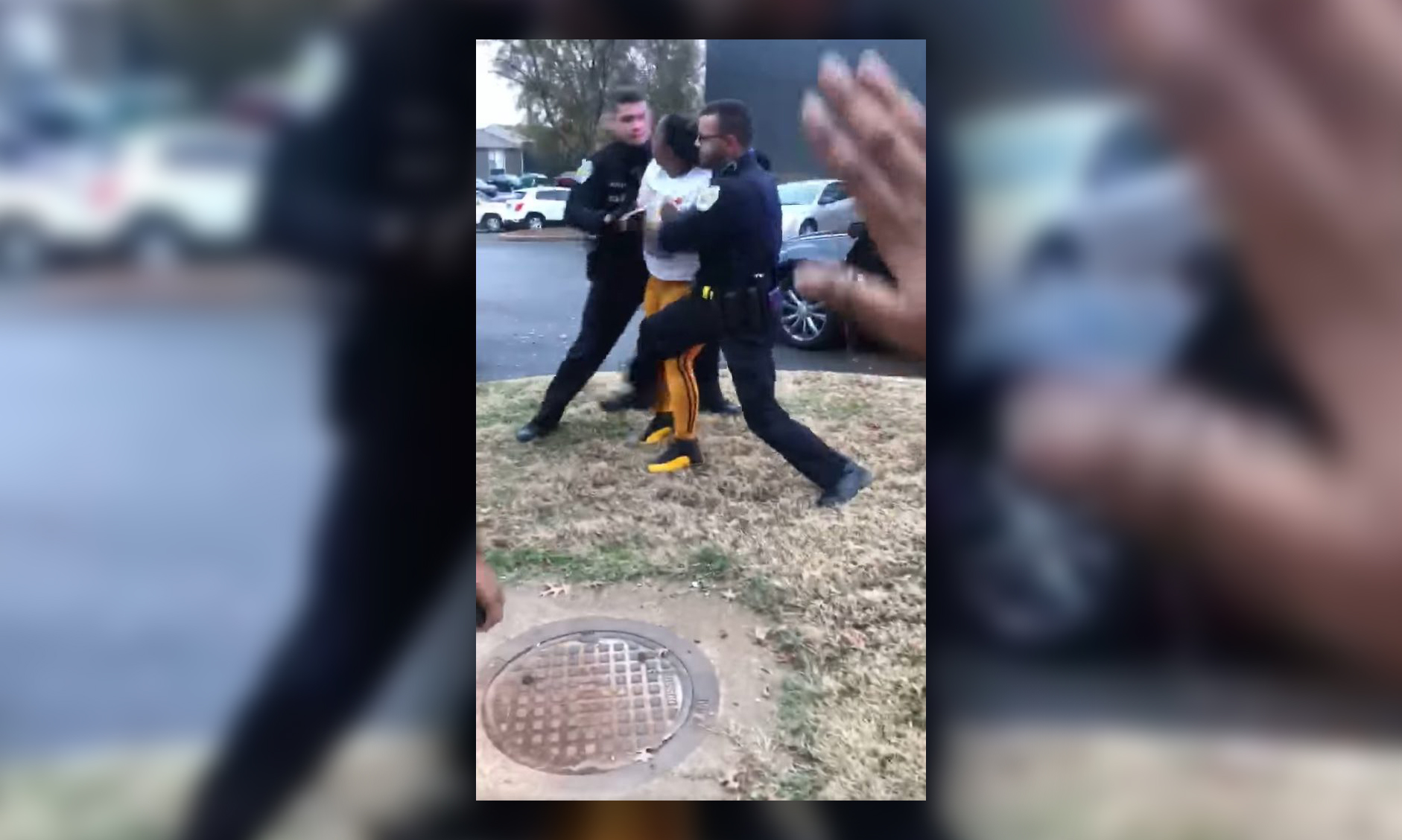 In an incident captured on video on Sunday, Huntsville police arrested three people after an attempted traffic stop and brief pursuit, taking a 41-year-old woman to the ground in the process.

It was a relatively minor incident in that no one was seriously injured or killed, but bystanders and the people who were charged say it was indicative of the problems between the Huntsville Police Department and the city’s Black community.

In the first video, a young Black man can be seen lying detained on the ground in the parking lot of an apartment complex. The man is Xavier Tate, 23. Two women stand nearby, speaking loudly at an officer as another one walks Tate away.

“Y’all do too much to Black people,” says Shanika Fletcher, 41, as she points at the first officer.

She is Tate’s aunt. She tells him that Tate was trying to drive home so he could be safe. The officer responds that Tate didn’t stop when he should have. Fletcher tells the officer that he would feel the same way in Tate’s position.

Tate’s mother, Lakeita Fletcher, 43, yells that she’ll call City Council Member Devyn Keith. The officer moves to the car’s driver’s door. The women say that it’s their car. The officer says he understands, but that Tate was in possession of it.

At this point, the interaction has calmed a bit and both women are looking at their phones. Another officer appears from the right, pulling on a pair of black gloves as he walks up. He says something to Tate’s aunt that includes the words “step back,” to which she responds, “I can stand right here.”

The new officer immediately grabs her right arm. She yells, “You ain’t touching me!” He spins her around and starts to force her to the ground as the first officer joins in to help him. The bystanders, which include Shanika Fletcher’s husband, start to yell, outraged.

“Sir! You can’t just do that! Stop!” yells the woman recording the video, 22-year-old Zelnita Williams.

There appear to be three officers at the scene by this point, which bystanders said was accurate. Two officers move to push the bystanders back as the officer who initiated the use of force tries to move Shanika Fletcher from her side onto her stomach.

“I’ll give you my hands,” she says, propping herself up with her right arm. The first officer turns back from the crowd and kicks it out from under her.

The second video opens with Lakeita and Shanika Fletcher being led away in handcuffs. Williams and her boyfriend, Dantraeon Calvert, 29, are yelling that the police were wrong for getting physical with women.

“Why is she in handcuffs?” Calvert asks of Lakeita, who had taken out her phone to record as the officers forced her sister to the ground.

“She wouldn’t stop interfering with the investigation,” the third officer says. He tells the bystanders to calm down so he can talk to them and starts to explain why Tate was arrested. Police tried to pull him over some distance away, he says, and he should have stopped a long time ago.

Williams and Calvert listen and respond, then Calvert yells when he sees an officer running toward where the women were taken. More officers appear to be arriving at the scene. The first officer walks up and takes over for the officer who was explaining their actions. He says that Tate “slow-rolled the whole way” from where they attempted to stop him, and that Tate’s aunt refused to move away from the vehicle, which is obstruction, and his mom pulled away from the officer, also obstruction.

Calvert begins to raise his voice again when the officer who tackled Shanika Fletcher walks up.

“Why did you do that?” Calvert yells. “I don’t have to back up shit! My father is an officer so if I need to call him down here, I don’t have no problem.”

That officer moves forward until the men are standing about two feet from each other.

“Now you asked me to back up and you walked up on me,” Calvert says. “Hold up! Shut the fuck up and stop talking to me like I said, before you get it!”

Both men take a few steps back.

Calvert continues: “No, you think that just because you’re a cop that you can do anything to anybody, and that’s wrong. Period.”

The officer, who is speaking but whose voice is unintelligible, moves toward Calvert again and pulls off the velcro badge on his chest as he says something including “I don’t care.”

Calvert is still irate, and Williams tells him that he needs to relax.

“I just watched them slam a woman on the ground for no reason,” he says.

Several more officers are now at the scene. Williams and Calvert have backed further away and are still speaking loudly. The officer, who they call Worley as is visible on his uniform, walks toward them again and threatens to arrest Calvert for disturbing the peace.

Calvert and Williams move further away and the situation begins to diffuse. The remaining 18 minutes of the video feature several calmer conversations between Williams, Calvert and officers who arrived after the first three, each exchanging their views of the situation. One officer encourages her to file a complaint with HPD’s internal affairs division if there was officer misconduct.

Huntsville police did not respond to requests for comment.

Two days after the incident, Williams said that what upset her the most was the way Officer Worley got physical with Shanika Fletcher seconds after pulling up and getting out of his car. All of the other officers she spoke with said that they didn’t know what was going on and were only there because they had heard the call to respond, she said.

“On the other hand, Officer Worley was not acting in that same manner. He came and just was acting first, without any questions, no nothing,” she said.

Williams moved to Huntsville from Corpus Christie, Texas, to attend Oakwood University, where she’s a pre-law major. She has been active in Huntsville’s Citizens Coalition for Criminal Justice Reform since June 3, when police from several local agencies fired tear gas and kinetic impact rounds, commonly called rubber bullets, at nonviolent protesters for not dispersing after 45 minutes following a rally against the killing of George Floyd.

“We see this time and time again, all the time — every time somebody of a minority gets arrested, they handle us with aggression as if we are not capable of feeling pain,” Williams said.

Shanika Fletcher said that she and her sister were released on a $500 bond after several hours at the precinct. She said she was left with pain in her wrist, neck and shoulders, and hasn’t been able to sleep on one side because of a sore hip.

She noticed police cars outside around Tate and went outside to make sure he was ok, “due to all the things that’s happening out here, you know? He’s by himself. A young Black kid,” she said.

Fletcher said she was caught off guard when the officer grabbed her. She heard his command to step back, she said, but he didn’t tell her to put her hands behind her back or say that he’d arrest her if she didn’t move, so she didn’t expect to be touched.

She grew up in Huntsville and hears stories of other Black residents in the city’s north side who complain of harassment and physical aggression by police, but said she’d never experienced it personally or felt so disrespected in her life. Besides the soreness, she said she’s afraid to go outside and hasn’t been sleeping.

Her husband watched the whole thing but was less vocal than the younger bystanders. He’s a landscaper and works a lot, but Fletcher said he’s been taking more breaks to call her throughout the day.

“He’s just always checking on me and questioning me about what my thoughts are because he knows I’m in a daze all day,” she said.

Tate’s mother, Lakeita, said that her son, who works for a catering company at a local senior center but has been mostly out of work since the pandemic began, was on his way to her place to pick up his dog. Police stopped him because his window tints were too dark, she was told. She disputed that, saying they’re transparent in daylight and she thinks they saw a young Black man and wanted to check him out.

He didn’t stop for them, she said, because he was following her instructions.

“I always told my son, with what’s going on in the world right now with these cops jumping on these young Black men, if they ever get behind you, son, you take them to a store somewhere that’s open where you feel safe, or either if you close to home, you come home,” she said.

She told him not to speed or break any rules of the road, just to get to a place he thought was safe.

After he pulled up outside, she said she saw two white cops draw their guns and order him to put his hands out of the window, which she said he did. They got him out of the car and put him on the ground.

Williams said she understands why police responded to that like they did. It was how one officer treated a frantic relative that she found unacceptable, she said. She added that she wants to see more officers step in and separate colleagues who are acting more aggressively than situations call for. In this case, the first officer was maintaining a dialogue with the women but joined in when another officer decided to use force.

“And with that, a lot of times people lose their lives. And this situation, it could have gone really bad,” Williams said.

Her boyfriend said that he felt like Officer Worley was provoking him by moving closer and tearing off his badge. If Calvert would have reacted physically, he risked being injured or killed, which he said the officer knew.

“I’ve never heard of that being in the police protocol anywhere,” he said. “That’s for the internet. That’s not for real life.”

Calvert said that he would never fight a police officer because his father is one.

He said a sergeant told him that officers are supposed to operate within their standard operating procedures and should be punished if they stray outside of those rules.

“And that’s all that I want to see because at the end of the day, not everyone is raised the same,” Calvert said. “And when you provoke someone like that and you, in essence, challenge someone like that, then a lot of people don’t necessarily have the restraint to remember the situation.”

The Fletchers said they plan to organize a group to speak about the incident at the City Council meeting today.