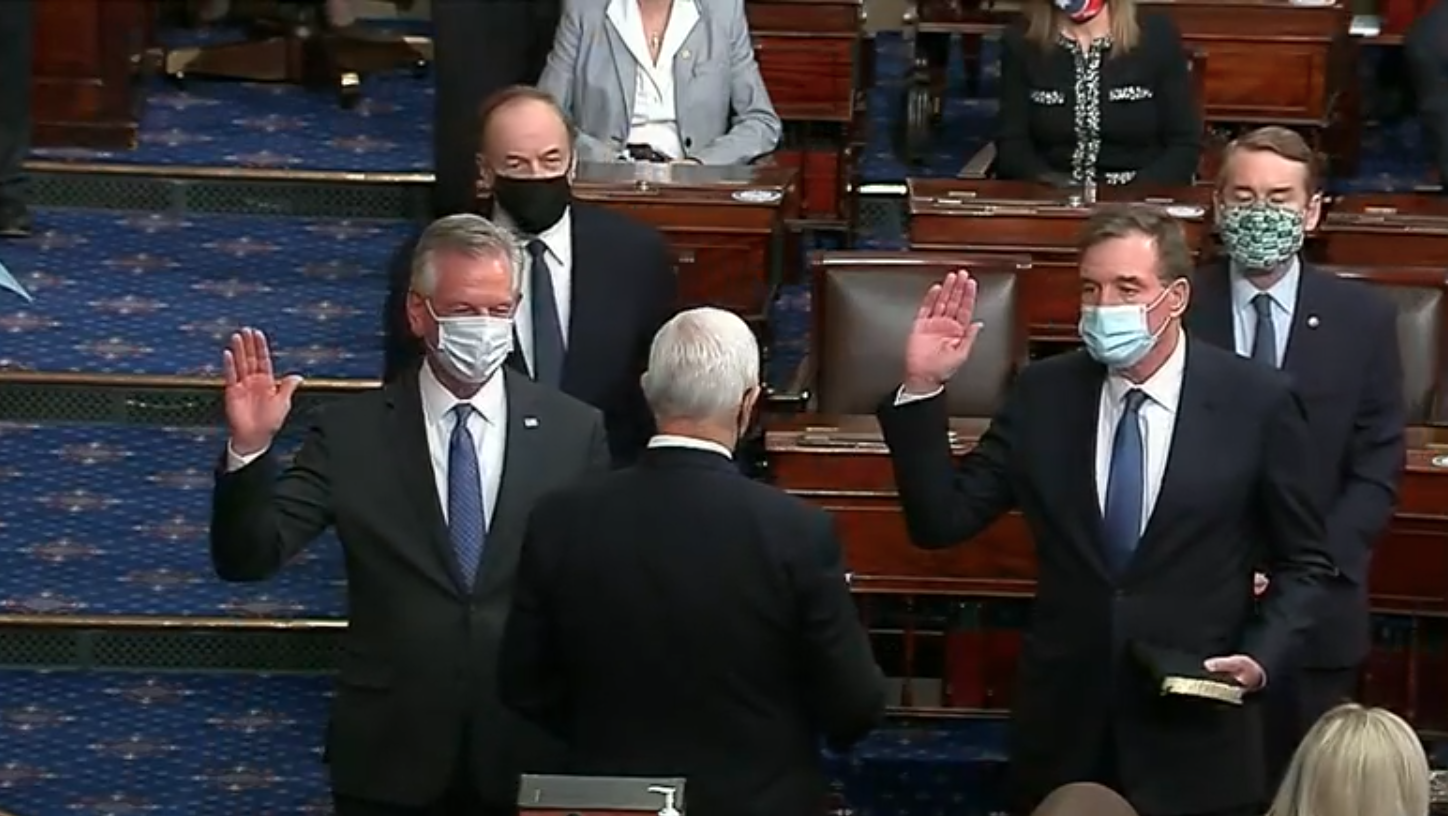 Sen. Tommy Tuberville, R-Alabama, is sworn in as Alabamas junior senator on Jan. 3, 2020. (VIA CSPAN)

The members of the 117th Congress will take their oaths of office on Sunday. Former Auburn University head football coach and Senator-elect Tommy Tuberville will now formally replace Sen. Doug Jones, D-Alabama, whom he unseated in the Nov. 3 general election. Tuberville’s win to become Alabama’s junior senator was the only pickup by the GOP of a seat held by a Democratic Senate incumbent in this election cycle.

Mobile County Commissioner Jerry Carl will also take the oath of office to represent Alabama’s 1st Congressional District. Carl, a Republican, replaces Bradley Byrne, R-Alabama, who ran for the Republican nomination for Senate but lost in the primary to Tuberville.

When the 117th Congress is sworn in, everything legislatively in Congress resets. Any bills that did not pass both chambers of Congress during the last two years are now dead. They are all tossed out and will have to be reintroduced and go back through the entire legislative process including committee work to be considered. In some cases, the bills will need new sponsors as members retired or were replaced by voters.

Incumbent U.S. Reps. Mo Brooks, Robert Aderholt, Gary Palmer, Mike Rogers and Terri Sewell are all returning for the 117th Congress as is Sen. Richard Shelby, R-Alabama, the state’s senior senator and the current chair of the Senate appropriations committee. Shelby has represented Alabama in the Senate since 1987. Prior to that, he spent eight years representing Alabama’s 7th Congressional District in the House.

Democrats retained their control of the House of Representatives, but they lost a number of seats in November’s election. Speaker of the House Nancy Pelosi, D-California, is expected to be retained the speaker’s gavel.

Control of the Senate has not been decided. Tuberville’s win gave the GOP one pickup of a Democratic seat, but Republicans lost seats in both Colorado and Arizona. When the new Senate is sworn in Sunday, Republicans will have 50 seats, and Democrats will have 46 seats. There are two independents — Maine Sen. Angus King and Vermont Sen. Bernie Sanders — who both caucus with the Democrats.

If Democrats Jon Ossoff and Rev. Raphael Warnock win their Georgia runoff elections on Tuesday, Jan. 5, then Vice President-elect Kamala Harris, who will be sworn in on Jan. 20, can break the tie for the Democrats. If that’s the case, Sen. Chuck Schumer, D-New York, will likely take over as Senate majority leader. If either Republican incumbent David Perdue or Kelly Loeffler wins re-election on Tuesday, then Republicans will narrowly maintain their control of the Senate. If that’s the case, Senate Majority Leader Mitch McConnell, R-Kentucky, will remain the majority leader. If Democrats get control of the Senate, Shelby will lose his chairmanship of the appropriations committee to Sen. Patrick Leahy, D-Vermont.

If Republicans don’t retain control of the Senate, Democrats would have control of both chambers of Congress and the White House once President-elect Joe Biden is inaugurated on Jan. 20. The last two times Democrats controlled both elected branches were the first two years of President Barack Obama’s presidency from 2009 to 2011, and the first two years of President Bill Clinton’s term from 1993 to 1995.