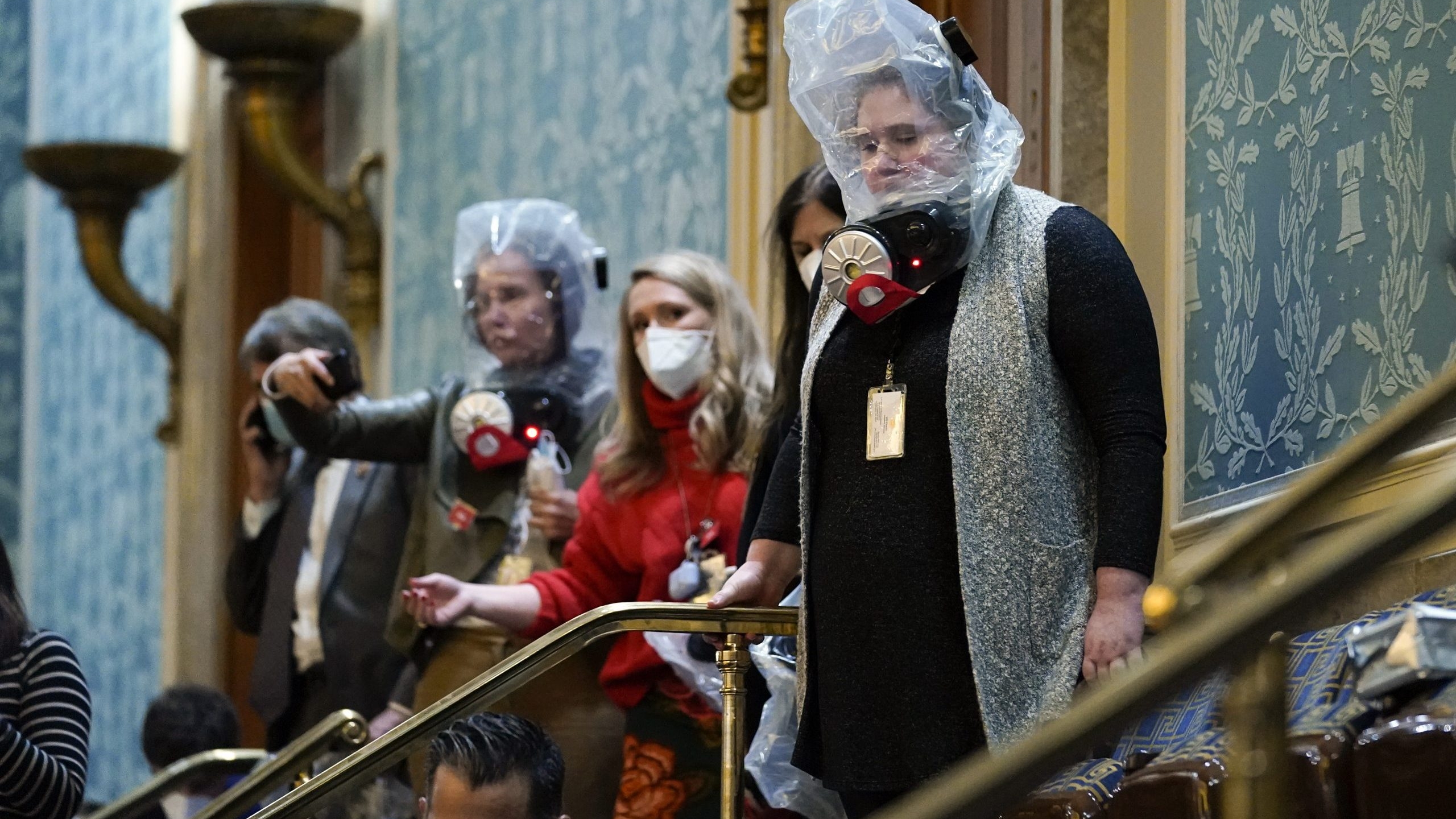 People are seen in the House gallery as protesters try to break into the House Chamber at the U.S. Capitol on Wednesday, Jan. 6, 2021, in Washington. (AP PHOTO/ANDREW HARNICK)

I write to you today on behalf of myself and the thousands of Alabamians who were utterly embarrassed and painfully ashamed by your involvement and incitement of today’s deplorable, harmful actions at our U.S. Capitol building.

You should all resign.

You have disgraced yourselves, the offices you hold, the State of Alabama and the United States of America. In a fair and just world, the stain of this outright attack on American democracy, in which you participated willfully, would hang over you for the rest of your lives.

And please, spare those of us with working brains the insult of watching all of you pretend as if you had noble intentions that simply went awry after a few people couldn’t control their tempers. Because nothing could be further from the truth.

In reality, what you went to Washington D.C. today to do was to undermine a free and fair and properly conducted election simply because you didn’t like the results and because making a public spectacle would endear you to a group of voters to whom you, your GOP colleagues and a collection of rightwing media outlets have spent months lying.

Those lies were meant to do one thing: Enrage this base in order to further your own political ambitions, both through votes and fundraising. And none of you gave two damns that you were knowingly damaging Americans’ faith in one of the bedrocks of this country — free and fair elections that result in the peaceful transition of power.

First thing this morning, there was Mo Brooks screaming like a maniac at a Trump rally, telling people it was time to “kick ass.” Joining the president’s call to march on the Capitol and his son’s warning that the mob was “coming for” any congressman who failed to challenge the election. And joining the president’s attorney who called for a “trial by combat.”

When the mob of domestic terrorists stormed the Capitol, causing thousands of dollars of damage, injuring numerous police officers and killing four people, Robert Aderholt was on the floor making an election challenge. Brooks challenged Nevada’s election results later in the day, despite knowing nothing more than what he read online about those results.

And possibly the most embarrassing of you all, Tommy Tuberville, voted twice to challenge election results in Arizona and Pennsylvania, despite the fact that he couldn’t tell anyone which processes were violated and likely couldn’t find either state on a U.S. map.

And that is what truly makes this all so utterly despicable and disgusting: None of you had cause to say anything. And even worse, every single one of you knew these elections challenges were complete and utter fiction.

In all of your statements and comments, not a single one of you has provided a specific instance of election fraud that hasn’t already been adjudicated by a state or federal court, and that hasn’t been thoroughly investigated and debunked. There have been, at this point, more than 60 court cases, in which allegations of fraud or illegalities have been filed. In every single one of them, the court has found no evidence to support those claims.

On the floor of the Senate late Wednesday night, even Sen. Lindsey Graham was perplexed by the phony insistence of fraud. He said there were claims that more than 60,000 people under the age 18 voted in Georgia. He asked the people making that claim to just provide him proof of 10. They couldn’t do it.

It was the same story in court case after court case. When it came time to put up or shut up, the Trump side had to shut up. In some filings they readily admitted that there was no evidence of fraud.

In the Pennsylvania case cited by Sen. Josh Hawley, who watched his political future wither and die on Wednesday, despite Hawley’s claims that the improper mail-in ballot question hadn’t been addressed by the state, it absolutely had. Three different times.

But you don’t care about any of that. Because there was never truly about your deep concern for election integrity. It was about your naked ambition.

So, on Jan. 6, 2021, disregarding your oaths to defend and protect the constitution, you instead helped incite insurrectionists and became active participants in a coup attempt to overthrow the American government.

All of you should do the only honorable thing left for you and allow men and women who might take the job and their oaths more seriously to hold those offices.