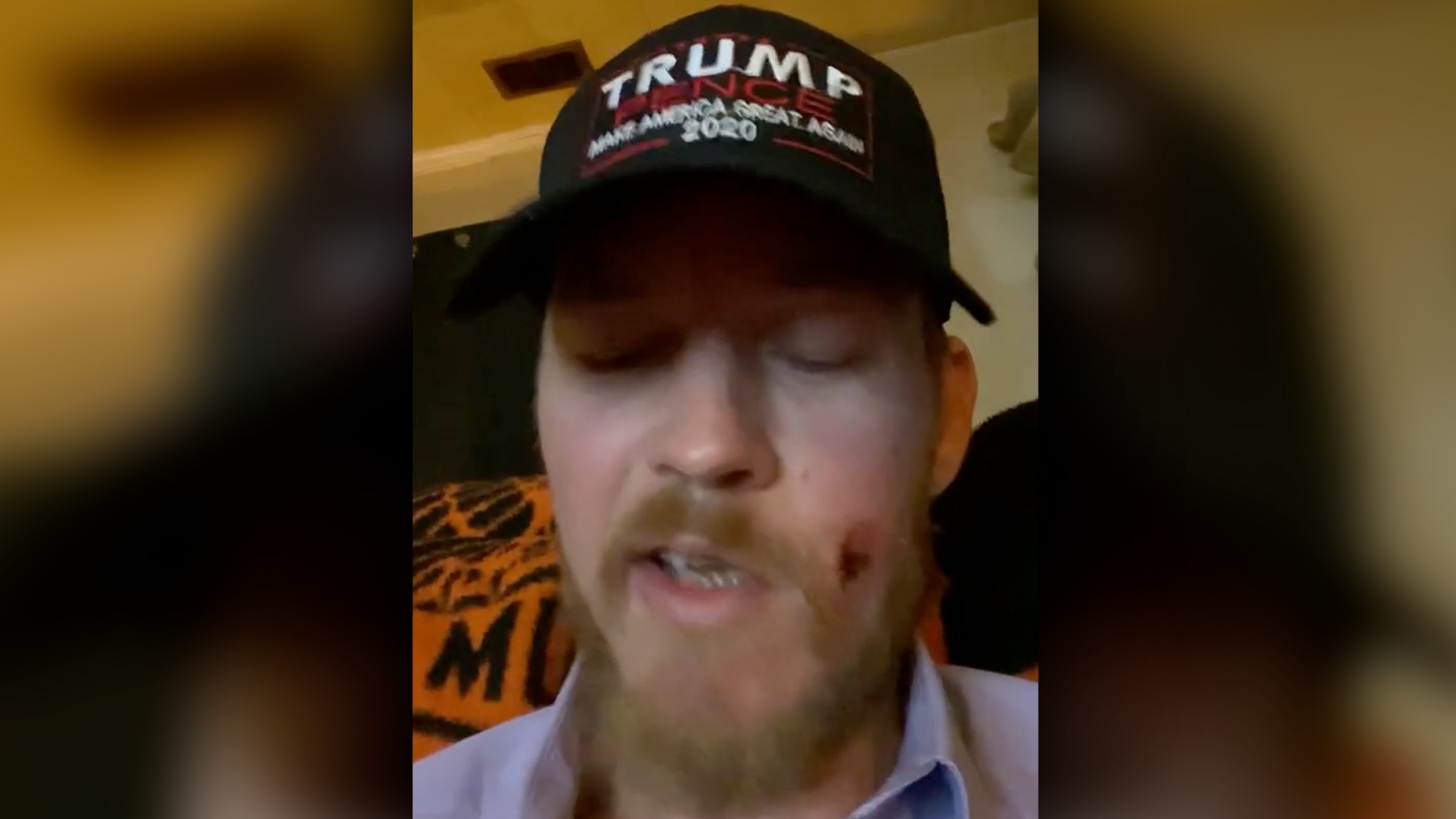 Joshua Matthew Black of Leeds speaking in a YouTube video he uploaded explaining his actions on Jan. 6, 2020, during an insurrection at the U.S. Capitol that ended with at least five deaths. (VIA YOUTUBE)

An Alabama man was arrested Thursday and charged in connection with entering the U.S. Capitol on Jan. 6 during the violent riot that left at least five dead, including a Capitol Police officer.

Joshua Matthew Black of Leeds was arrested Wednesday in North Alabama, according to a U.S. Department of Justice list of investigations connected to the Capitol attack. Black’s federal court records related to the case remained sealed on Thursday, according to the federal criminal database.

Images of a man wearing a red hat and camouflage jacket on the Senate floor, which were shared widely on social media following the attack, was of Black, according to an affidavit written by an FBI agent, posted to the DOJ’s website.

“On January 8, 2021, an individual using the username “LetUs Talk” posted two videos on YouTube,” the affidavit states. In the two videos, Black, wearing a Trump hat, said he planned to turn himself in to the FBI once he uploaded the videos, and described his version of what happened on Jan. 6.

“Once we found out that Pence turned on us, and that they had stolen the election, like officially, the crowd went crazy. I mean, it became a mob. We crossed the gate,” Black said in the first video.

Black said he was shot by an officer with what he believes was a projectile, which went through his left cheek. Black said on the video that he attempted to help an officer who was alone and had been knocked down and was being beaten by other rioters when he was shot.

“He was on the ground and there was boots coming down,” Black said, referring to the officer being beaten.

Black stopped discussing what happened for a moment to say he’d recently seen a video of Trump denouncing the rioters.

“I just saw a video from Trump, that said we were heinous or something like that. I guess the hopes of getting a pardon are out the window,” Black said.

“I actually had a knife on me but they never … I had too much clothes on, it was freezing out there, you know,” Black said. “I never, I wasn’t planning on pulling It. I just carry one because I do. I work outside. You need knives, you know. You’re not allowed to carry guns in D.C., and I don’t like being defenseless.”

Black in the video said that once he got inside the Capitol he “found a little spot, and there was a glass door, and it said ‘US Senate’ on it.”

“I said I need to get in there. I just felt like the spirit of God wanted me to go in the Senate room, you know. So I was about to break the glass and I thought, no, this is our house, we don’t act like that. I was tempted to, I’m not gonna lie. Cause I’m pretty upset. You know? They stole my country,” Black said.

“I just wanted to get into the inside of the building so I could plead the blood of Jesus over it,” Black said.

Black said after leaving Washington D.C. he shaved his beard a bit to help disguise himself.

“I’ve actually been wearing a mask, and not for COVID but for not going to jail,” Black said.

Black agreed to meet with an FBI special agent in Moody on Jan. 8, according to those records, and at the meeting said he’d recorded the videos detailing his experience.

A caller to the FBI on Jan. 10 reported that Black was the man in the red hat seen in the photo standing in the Senate chamber, the court record states.

Black is charged with entering a restricted building or grounds, and violent entry and disorderly conduct, according to the criminal complaint. Black does not appear to have a criminal record in the state of Alabama, according to a search of those records.