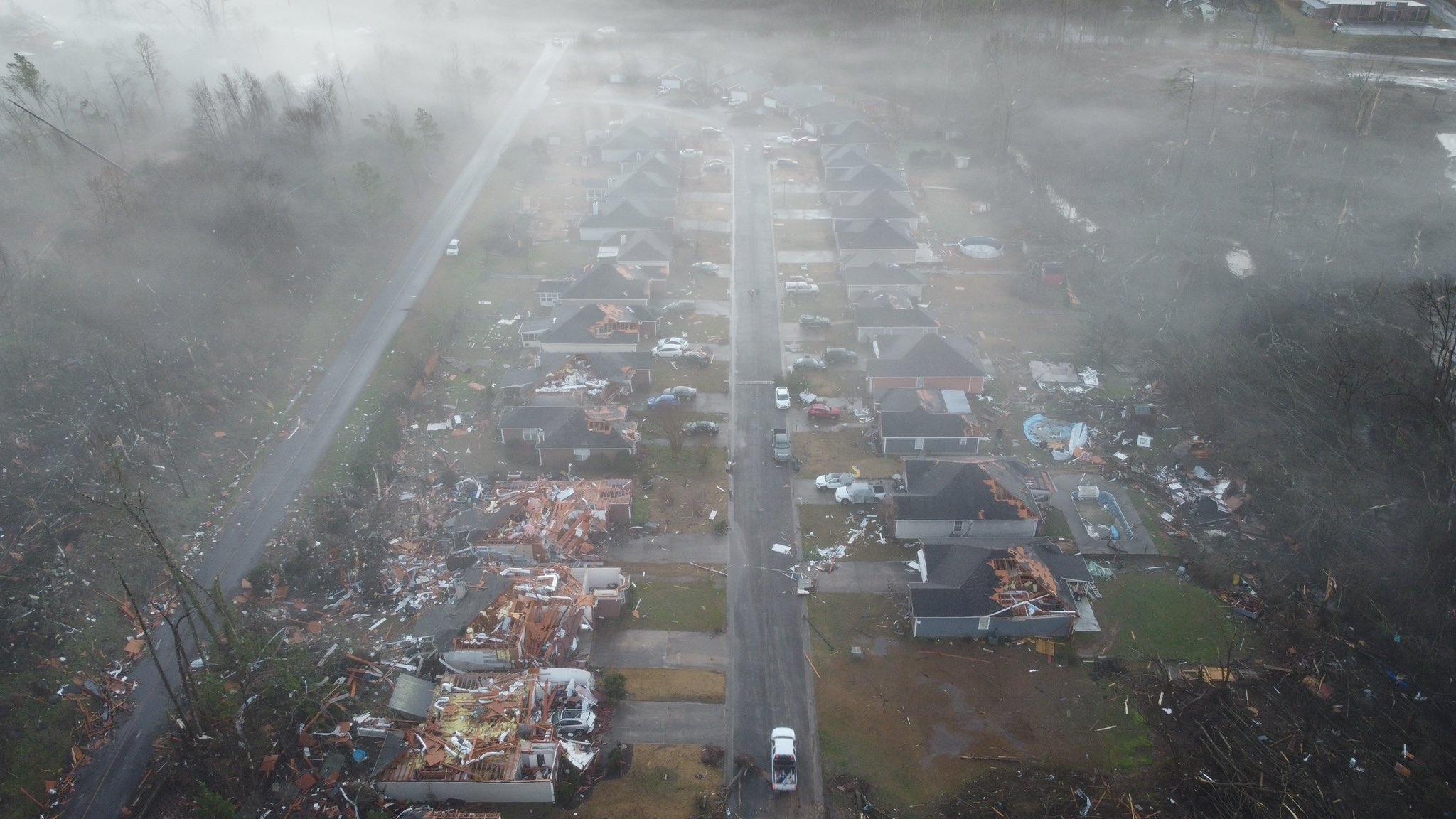 An aerial shot of storm damage near Darlene Estates in Fultondale, Alabama, after a tornado ravaged the area on Jan. 25, 2021. (@MOON2PACHI/TWITTER)

A tornado touched down in the Fultondale and Center Point areas of Jefferson County late Monday, killing at least one person and sending 17 to the hospital.

Trees are down in the areas impacted by the severe weather, there are homes that are damaged or destroyed, and there are power lines down on the roads.

Jefferson County shared on social media: “We have the following update on roads: Sunhill Rd has power lines down just past Jeff State, Old Springville Rd. is closed at Garrison Valley Lane, Mohawk Drive is closed, and Republic Rd in Fultondale is closed due to trees down and power lines.”

Several schools in the area are closed due to the severe weather. First responders say that there are some people still trapped in their homes and that rescue efforts are underway.

The National Weather Service in Birmingham issued a tornado warning at 10:34 p.m.

Residents of the Fultondale area had just eight to 10 minutes to get to a safe place in their homes before the tornado hit. There was longer lead time for residents of Center Point.

A lot of roads in Fultondale are still closed. Fultondale High School is heavily damaged. It and the Hampton Inn on I-65 appear to be damaged beyond repair according to early reports. A number of homes are totally destroyed.

Spann said, “Another reminder here it is critical for every Alabama home and business to have a NOAA Weather Radio (it does not use a cellular network; it is an independent network that is very reliable). And, for every individual to have WEA (Wireless Emergency Alerts) enabled on their phone.”

While commuting into work, remember to slow down as first responders and utility crews are out on the roads and some roads may still have debris blocking the roadway.

This deadly January storm is just another reminder that severe weather can happen at any time of the year in Alabama, and it is not always in a major storm front that can be tracked for hours coming across the state.

Since World War II, when accurate records began being recorded, more Alabamians have been killed by tornados than people in any other state. Texas is No. 2.