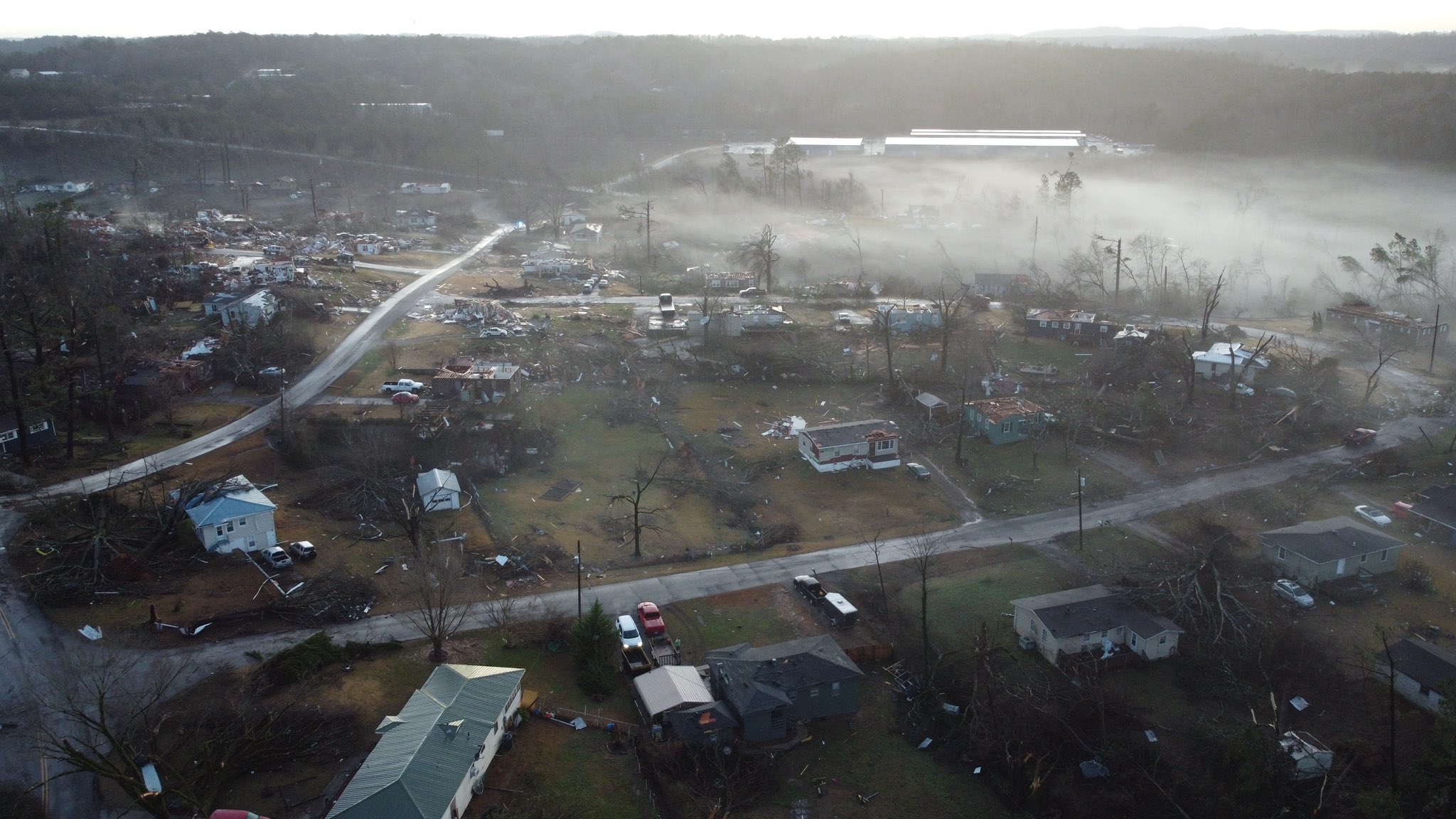 An aerial shot of storm damage near Darlene Estates in Fultondale, Alabama, after a tornado ravaged the area on Jan. 25, 2021. (@MOON2PACHI/TWITTER)

Alabama Governor Kay Ivey reached out to Fultondale Mayor Larry Holcomb and Center Point Mayor Bobby Scott following Monday’s devastating severe weather that left a 14-year-old dead and at least 30 other people injured. A number of other state leaders also expressed their concerns for the injured and the people whose homes were damaged or destroyed.

“I have reached out to Fultondale Mayor Holcomb and Center Point Mayor Scott and have pledged to them any support or resources that are available. The search and rescue efforts continue today, and we certainly give our thanks to those folks as they carry out their mission. To the Alabamians gravely affected by this round of severe weather, I am with you. We will get through this.”

“Tragedy struck Fultondale, Alabama last night. My thoughts and prayers are with those who were injured and those who lost a loved one in last night’s deadly tornado. Pictures of the destruction are heart wrenching, and I pray Fultondale will soon rebuild and fully recover from the disaster. As they always do, first responders rose to the challenge and made Alabama proud by answering the call of duty.”

“My prayers are with all of the families impacted by the tornado in Fultondale, and especially with those whose loved one was a victim of the storm.”

“I’m heartbroken by the devastation in Fultondale today. The damage and loss of life are grievous. I am in discussions with my district staff about ways we can help, and I am praying for those who have been affected.”

“My heart goes out to all those affected by last night’s devastating tornado in Fultondale and Jefferson County. Please join me in praying for the swift recovery of those in critical care and for God to comfort the family who tragically lost their son amid the destruction.”

Rescue and recovery efforts are winding down and damage assessments are underway. According to an early assessment by the National Weather Service’s storm survey crews, the tornado was at least a high-end EF-2 tornado based on the damage. Winds reached 135 miles per hour in Fultondale, primarily north of Walker Chapel Road to U.S. Highway 31 and to New Castle Road.

Authorities have identified the person that was killed as a 14-year-old freshman at Fultondale High School Elliott Hernandez.

Alabama Power crews are working on restoring power to customers who have lost service, but in the hardest-hit areas near Fultondale, many people have no homes left. Early reports are that there is severe damage to the Hampton Inn in Fultondale near I-65 as well as to Fultondale High School. There are reports that both may be total losses.

“The people of Fultondale took a hard hit last night,” Ivey said on social media. “I’m grieved over the loss of life, injuries, homes & damaged businesses. I offer my prayers & deepest sympathies & pledge the full support & resources our state has to offer. I am with you, Fultondale!”