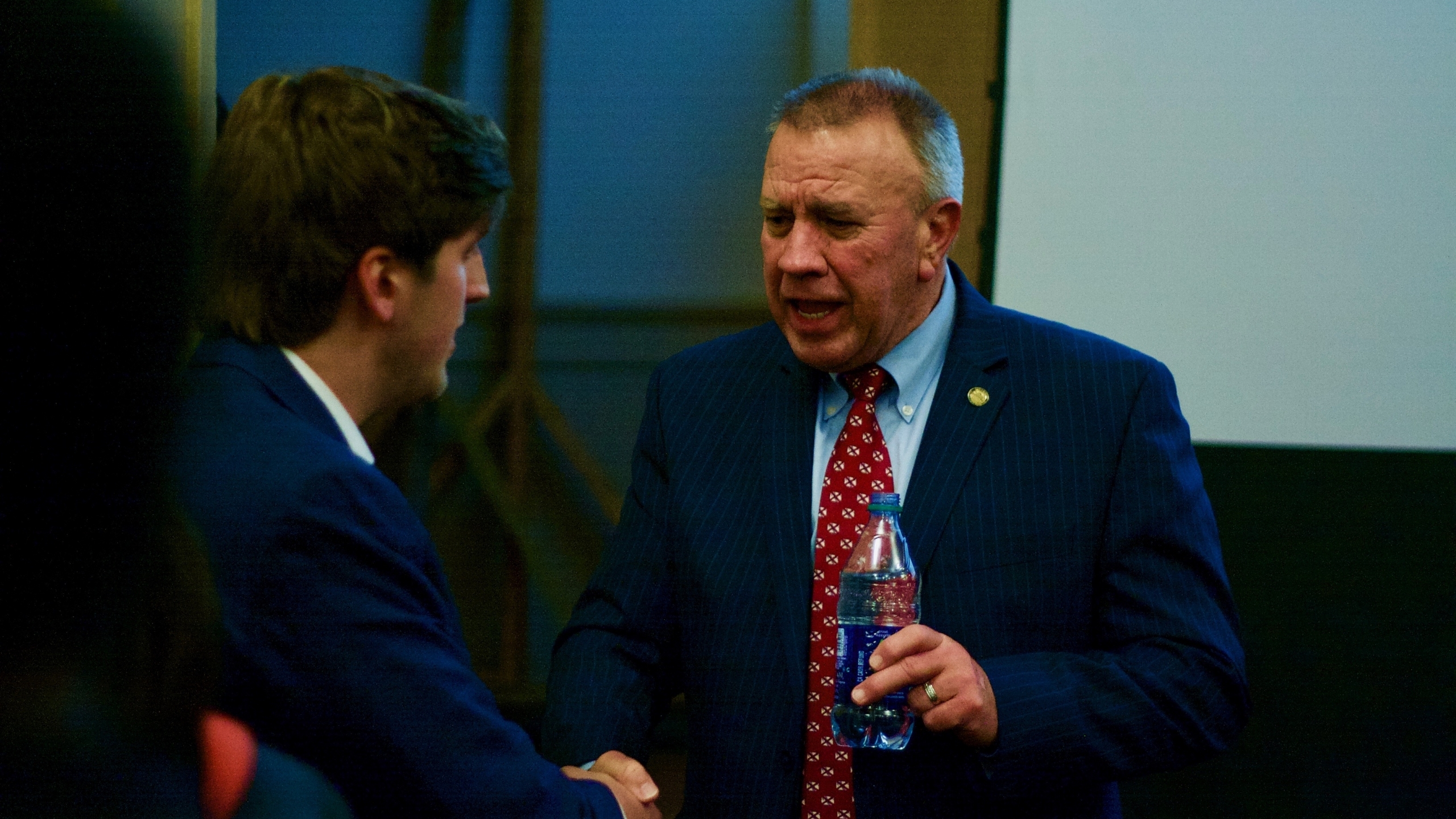 Speaker of the House Mac McCutcheon speaking at an event in Auburn.

Speaker of the House Mac McCutcheon told reporters that the third week of the 2021 Legislative Session was a “good week.”

“We finished up the ninth legislation day,” McCutcheon said. “We have had a good week. We were able to open another committee room so 15 to 17 committees were able to meet, and we passed 150 bills through committee.”

McCutcheon said that the House passed bills to reform the prisons, the judicial process, the pardons and paroles process, the county jails having state prisoners, and put a system in place where children would have to test a child before they get in first grade.

McCutcheon said that House Bill 208, from state Rep. Pebblin Warren, D-Tuskegee, is designed “not to hold any children back as they go through the education process.”

“Overall we had another good week,” McCutcheon told the Capital Press Corps. “We were able to get out 25 sunset bills today.”

McCutcheon said that he expects that the House will address military bills next week. The bills are designed to make the state more attractive for the U.S. Military ahead of the next round of base realignments and closings that have already passed the Senate and passed out of the Military and Veterans Affairs Committee in the House. McCutcheon hoped that the Legislature could invite some soldiers and have a military day at the end of next week, perhaps outside in front of the Statehouse. “We hope, if everything works out,” he said.

“So far members are healthy,” McCutcheon said of the COVID-19 situation. “Everybody is cooperating.”

McCutcheon was asked how many of the members had been vaccinated.

“I do not know,” McCutcheon said. “Many of the legislators have received their first vaccine shot. They get their second vaccine on March 11.”

McCutcheon was asked about the medical marijuana bill that passed out of the Senate on Tuesday, Senate Bill 46, by Sen. Tim Melson, R-Florence.

“We are going to see what came out of the Senate,” McCutcheon said. “We were a little surprised that it came out so fast.”

McCutcheon said that some House members had concerns that the bill is “just a stepping stone to legalize marijuana in the state. We want to make sure that it is tight enough to deal only with the medical issues.”

“What are the things that medical marijuana can be prescribed for,” is another issue that the House is going to look at.

McCutcheon was asked by reporters why this bill had to be approved by two different committees.

“One is the fact that it has got the medical treatment of the bill and we are dealing with a drug that the federal govt has not given its stamp of approval. It is still a class one narcotic,” McCutcheon responded.

McCutcheon was asked if the Judiciary Committee will address SB46 next week.

“I don’t know,” McCutcheon answered. “It could. Over the next two weeks, it will be in committee.”

Right now, the House’s next priority is the budgets, McCutcheon said.

“I want to make sure that we get the budgets out,” he added.

McCutcheon said that the Ways and Means Committees will be passing out bills that “deal with our economy.”

Today the House addressed the “tax issue for our local airports, which is a big deal for them,” McCutcheon said.

McCutcheon said that next week, the House will work on “more bills for judiciary dealing with judiciary reform and there will be more discussion about the marijuana bill as well as state agency bills, there will be a little bit of an uptick on the budgets.”

“As far as the DOJ lawsuit, you are not going to hear a lot from the Legislature,” McCutcheon said. “The Attorney General is working on that.”

McCutcheon said that the Legislature is working on “creating an oversight committee to oversee any contracts of large magnitude. It is just good government and good policy.”

“This is nothing to do with the current project,” McCutcheon said. “We are not trying to stop anything. We are just looking forward.”

“This is a lot of money that we are about to spend,” McCutcheon said. “The Legislature should have an input in this.”

“This is not an attack on the governor,” McCutcheon said.

McCutcheon said that the governor is negotiating a multibillion-dollar deal on the prisons and “the Legislature has had little input into that.”

The House has passed a bill dealing with state inmates that were in county jails; a bill dealing with sentencing issues, giving judges the discretion to resentence a parolee so that he does not have a 10-year sentence hanging over his head; and a third bill mandating that there be a community corrections program in every judicial circuit or county.

Earlier in the day, the chair of the Alabama Democratic Party, state Rep. Chris England, D-Tuscaloosa, told reporters that new leadership was needed at the Alabama Department of Corrections. Reporters asked McCutcheon if he shared that opinion.

“Chris England has his opinion,” McCutcheon said. “I don’t think it is pushing the envelope.”

“Commissioner Dunn has always been willing to sit down and talk with us,” McCutcheon said. “I am not on the point that I am calling for his job.”

McCutcheon was asked about getting more people in the state vaccinated.

McCutcheon was asked if the Vulnerable Child Compassion and Protection Act, House Bill 1 by Rep. Wes Allen, R-Troy, would be on the floor of the House next week.

“There is a good chance that it may make the floor,” McCutcheon said. “There are some amendments on the house bill that is not in the Senate bill (SB10) dealing with medical professionals.”

“That is one of the bills that is on my desk for me to read,” McCutcheon said. “I do like the House bill better than the Senate bill.”

“The welfare of the child is what is most important,” McCutcheon said of the bill which would protect minors from being given puberty blockers, hormone therapies or medical procedures designed to alter the gender of the minor child.

Tuesday will be day 10 of the 2021 Legislative Session.