The Senate Health Committee advanced legislation that would give the governor and not the Medical Association of the State of Alabama the authority to appoint the state’s highest public health official.

“The bill itself addresses the fact that we have a state agency that is fully controlled by a private group,” McClendon said. “A private club selects the state health officer. His only allegiance is to this private club the Alabama Medical Association. This is unique to the nation. No other state does this.”

Also under existing law, a county board of health is comprised of the board of censors of county medical societies affiliated with the Medical Association of the state of Alabama.

SB240 would abolish the State Board of Health, including the position of state health officer, and the State Committee of Public Health under their current structure and membership. It would reconstitute the Alabama Department of Public Health, provide that all duties and responsibilities of the State Board of Health are duties of the department and revise the authorities granted to the department.

SB240 would create the position of secretary of the Alabama Department of Public Health to be appointed by and serve at the pleasure of the governor and would establish duties of the secretary.

McClendon said that the county health officers in Mobile and Jefferson Counties would be picked by the head of the county commission and be selected from doctors who operate in those counties.

“Jefferson and Mobile are unique that they have an active health officer, this will not change that,” McClendon said. “They will still exist. We are just changing the way they are selected.”

“These laws were written between 1858 and 1890,” McClendon explained about Alabama’s unique public health system. “We are trying to bring them up to date.”

“It’s not broken,” Melson said of the Alabama Department of Public Health. “I don’t want to see it put in the governor’s cabinet.”

Sen. Larry Stutts, R-Sheffield, said: “The current law has worked well since the 1890s. We should not bring this at the tail end of a pandemic. A total overhaul is misguided.”

“Me and Dr. Harris might not agree on everything he has done, but I respect his judgment,” Stutts said. “I want the state health officer to be independent.”

“The system is not working at all,” McClendon said. “The health outcomes in Alabama are the worst in the country. We are 49th in diabetes and maternal deaths. We are 48th in infant mortality. The Black Belt has the highest infant mortality anywhere in the country, and we have not done anything about it. My point is that we are not in good shape.”

“I did not come forward with this in response to the pandemic,” McClendon said. “I was working on this before we had even heard of COVID.”

Stutts also objected to the pay for the members of the advisory board.

McClendon agreed to amend the bill to work with Stutts’s concerns.

“The secretary of health does not have to be a doctor,” McClendon said.

Sen. Billy Beasley, D-Clayton said: “I think the state health officer has to be a doctor.”

“There are 2,600 employees over there at the Department of Public Health,” McClendon said. “That is a heck of a management job and not a job that a doctor is trained for. A hospital administrator would be more qualified to run the Department. The medical director is a doctor and is hired by the secretary of health.”

“That person does not need to be a medical doctor,” said Sen. Tom Whatley, R-Auburn. “From a military perspective, I was commander of a helicopter brigade, and I don’t fly helicopters. But I do lead soldiers. I certainly did not get behind the stick of a helicopter and attempt to fly it.”

“There are administrators who work under the state health officer,” Melson asked, “are we just reversing the pyramid here?”

“My objective here is to make the state a healthier place,” McClendon said. “This bill is not about Dr. Harris. This bill is about having a state agency answerable to elected officials. We are the only one who has this setup.”

“The number one risk factor for all of those diseases you listed is obesity,” Stutts said. “We are the most obese state in the nation. Changing the makeup of the Department of Public Health is not going to change that.”

“To make a political appointee in this position is a step in the wrong direction,” Stutts said.

The committee gave SB240 a favorable report. The bill now goes to the full Senate for their consideration. SB240 has 18 cosponsors.

Thursday will be day 12 of the 2021 Legislative Session.

Alabama’s COVID hospitalizations reached 1,776 on Monday, a level not seen since Sept. 21 and a 239 percent increase from two weeks ago. 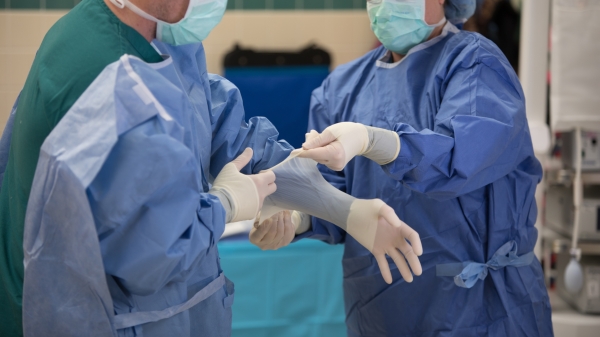 While some public school systems are requiring masks, others are taking a wait-and-see approach as cases and hospitalizations increase statewide.