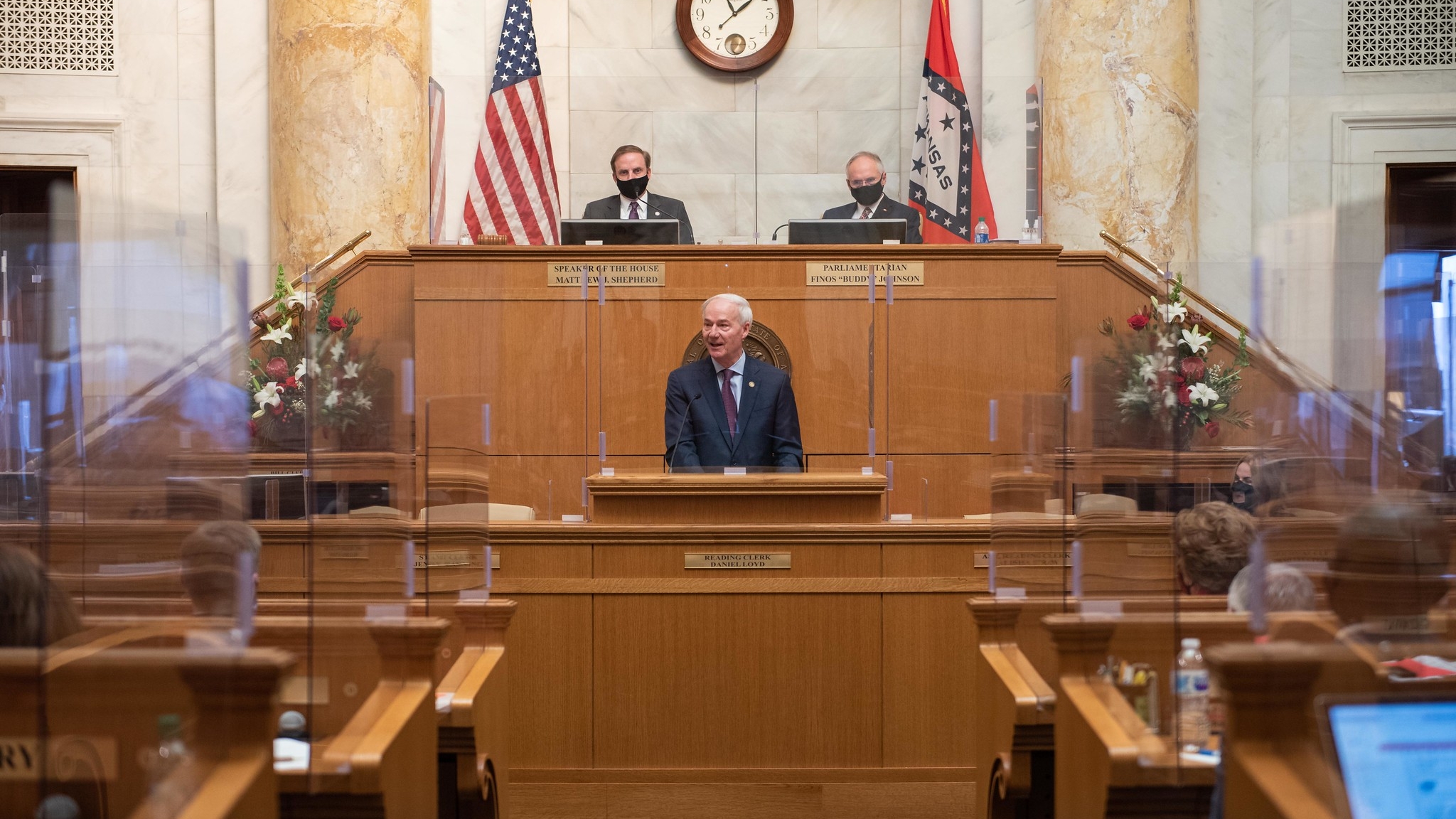 Gov. Asa Hutchinson speaks before the Arkansas Legislature during his state of the state address in 2021. (VIA OFFICE OF GOV. ASA HUTCHINSON)

Arkansas Gov. Asa Hutchinson vetoed a bill on Monday that would prohibit transgender youth from accessing gender-affirming medications or surgery. House Bill 1570, known to supporters as the Safe Act, could still become law if the state’s Republican-controlled Legislature overrides the veto, which would only require a simple majority.

The bill would have been the first of its kind signed into law in the U.S., but similar bills have been proposed in several other states including Alabama.

Hutchinson told reporters he was aware that the eyes of the nation were on his state over the legislation, which he called a product of America’s culture war.

“I don’t shy away from the battle when it is necessary and defensible, but the most recent action of the General Assembly, while well-intended, is off-course, and I must veto House Bill 1570,” he said.

The bill would prevent doctors from prescribing hormones or puberty-blockers and prohibit them from referring patients under 18 to other providers for those treatments. Hutchinson described that as too extreme and “a vast government overreach,” noting that it would terminate care currently being provided to transgender youth because it wouldn’t allow them to be grandfathered in.

While young people who are transgender or experience gender dysphoria are an “extreme minority,” he said, their situations are among the “most complex and sensitive” that involve young people, and they deserve the guidance of their parents and medical professionals they choose.

He noted that gender reassignment surgery is already prohibited from being performed on minors, a point that opponents of Alabama’s proposed ban have also made.

He added that government intervention is sometimes necessary to protect lives, but said the bill is overly broad and puts young people at greater risk of suicide and substance abuse. Hutchinson acknowledged that the bill is in the Legislature’s hands now.

“I’m hopeful, though, that my action will cause conservative Republican legislators to think through the issue again and hopefully come up with a more restrained approach that allows a thoughtful study of the science and ethics surrounding the issue before acting,” he said. “Government under a conservative philosophy should be restrained. This is an example where restraint is better than overbroad actions that interfere with important relationships in our society.”

Alphonso David, president of the Human Rights Campaign, a national organization that advocates for trans rights, said in a statement that lawmakers elsewhere should recognize that such legislation is unpopular with voters across the political spectrum and is driven by national anti-LGBTQ groups, not local constituencies.

“This ought to be a warning to any governor across the country considering bills like HB 1570. The repercussions were too much for Arkansas, and they will be just as severe for any state weighing this type of legislation,” David said.

Dozens of major corporations, including Facebook, Amazon, Google and Verizon, have come out against legislation that discriminates against transgender people. So far, 69 have signed the Business Statement Opposing Anti-LGBTQ State Legislation.

Trans rights have been a big issue for major sports leagues, franchises and large companies. The Associated Press estimated that North Carolina’s controversial 2016 “bathroom bill” could have cost the state more than $3.76 billion in business losses over 12 years. The state rescinded the law after a year of boycotts by major entities like the NCAA, NBA, Paypal and Deutsche Bank.

The site is part of a campaign to work with local faith leaders to educate people about the vaccine.

Over two-thirds of Americans oppose bans on transgender athletics, according to a new PBS NewsHour/NPR/Marist poll.