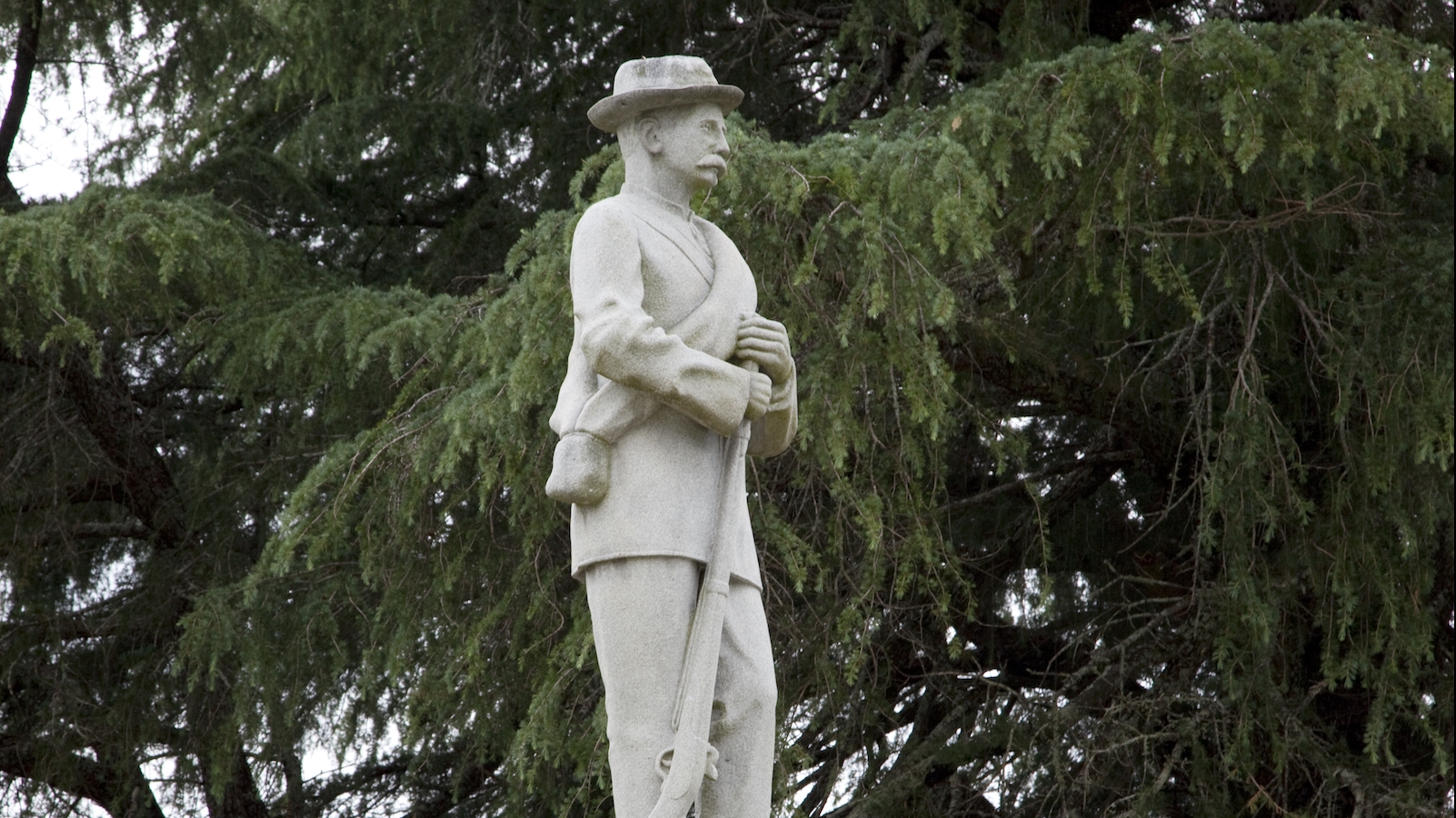 Confederate statue in the town square of Tuskegee, Alabama.

The Confederacy lost another one. Wednesday afternoon, saying he simply couldn’t wait any longer on the city or county to act, former Tuskegee Mayor Johnny Ford, carrying a concrete saw, climbed in a bucket lift in the city’s town square and attempted to bring down a Confederate monument. He was successful in hacking through one ankle — leaving the statue on its last leg and potentially unsafe, possibly forcing its ultimate removal — before he was stopped by Macon County Sheriff Andre Brunson.

“Enough is enough,” said Ford, a current Tuskegee city councilman. “The people of this city are tired of waiting on our elected officials to collectively act on this. Like them, I was tired of waiting.”

By late Wednesday, the statue was covered with a tarp and police tape surrounded an area around the statue. Whether the statue could safely remain in its place was still being determined, city leaders said.

The statue of a Confederate soldier is possibly one of the most racist symbols still standing in America. It was erected in 1906 by the United Daughters of the Confederacy on land — in the middle of the town square — gifted to the UDC by the white-controlled county government, according to the Associated Press. That land was turned into a “whites only” park at the time.

The dedication of the statue and park in 1906, occurring just a few months after Tuskegee University’s 25th anniversary celebration, was little more than a thumb in the eye to Black residents of the city. When the statue was officially commemorated in 1909, the city of Tuskegee was 82 percent Black, an AP story said.

Today, 115 years later, UDC — a neo-confederate group that preaches the “lost cause” of the South — still owns the land and the statue. Removing it has proven to be tricky.

A large protest in 2020 resulted in city and county leaders stating that they planned to remove the statue. There were plans at the time to move it to a local cemetery. But those plans, and others, fell through, and there seemed to be no real efforts under way to rid the city of the statue.

Until Ford came along with his saw on Wednesday.

Ford didn’t challenge Brunson when the sheriff told him to stop and, according to the Montgomery Advertiser, Brunson told Ford that he couldn’t “let him commit a crime right in front of me.”

Brunson has said Ford, and an unidentified accomplice, will likely face charges. There could be other charges as well. Alabama’s poorly-written monuments law, which charges cities up to $25,000 for destroying historical monuments, could possibly come into play.

“I don’t really care what the state wants to do,” Ford said. “This is Tuskegee.”

His ultimate goal, he said, was to saw off the soldier and leave the pedestal, upon which a new statue — possibly one of Tuskegee residents Booker T. Washington or Rosa Parks — could replace it. Ford also told the Advertiser that he planned to bury the Confederate statue on public lands when he finished sawing it down.

“We cannot, in Tuskegee, Alabama, the birthplace of Rosa Parks, the home of the Tuskegee Airmen, the home of Tuskegee University, this historic city, have a Confederate statue in a park built for white people,” Ford said.