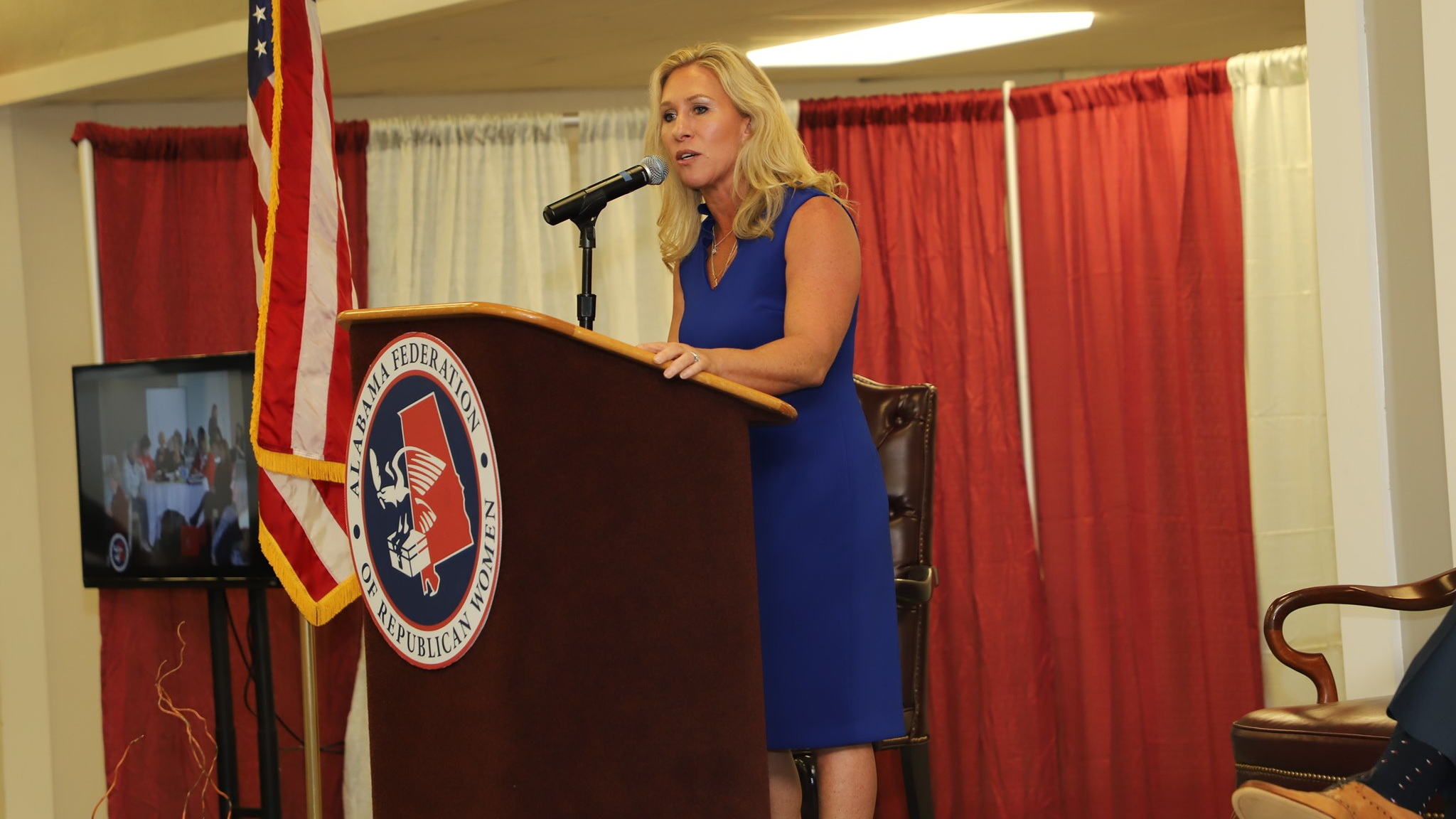 Outspoken GOP freshman Congresswoman Marjorie Taylor Greene spoke to the Alabama Federation of Republican Women at the Civic Center in Dothan on Friday.

Congressman Mo Brooks, R-Alabama, said that Green, “Has been an excellent and consistent vote” for the cause of liberty since she joined the House in January.

“She is brilliant,” Moore said. “She is so nice, but she is a fighter.”

Moore praised her for her “courage and wisdom” and added, “She will fight a circular saw in a phone booth for the good of this country.”

Moore said that House Democrats, “Have an AOC, but we have a MTG.”

Greene addressed an enthusiastic crowd of conservative Republican activists of approximately 250. All of the VIP reception tickets were sold out according to organizers as conservative women were able to interact with the three members of Congress.

Britney Garner said that the event was a fundraiser for the Alabama Federation of Republican Women.

Greene told the enthusiastic crowd, “Impeach Joe Biden and expel Maxine Waters. We have got to take out the trash in Washington. Fire Dr. Anthony Fauci.”

“I am a supporter of Donald J. Trump and I believe he won the election,” Greene said. “I have never been in or held a political office before. I have mostly been making money and being a wife and mother. I have owned my own business for 25 years.”

“I quit calling them socialists and now call them Communists,” Greene said, but added that prior to her running for Congress it was the Republicans that had most disappointed her.

“They were telling me how they were going to repeal Obamacare and then they said they were going to build a border wall, defund sanctuary cities, defund Obamacare; but under the first two years under President Trump when they had majorities in both the House and Senate they didn’t do anything of those things,” Greene said. “I was really disappointed.”

Greene said that her insurance premiums went from $800 a month to $2400 a month under Obamacare and yet the congressional Republicans did not repeal it when they had the chance.

“What I really get angry with is Republicans who don’t do what they say they are going to do,” Greene said. “I am holding congress accountable and I don’t care whether they have a D or an R behind their name.”

“I believe America is worth saving,” Greene said. “On January 3rd when we were swore in. That was the day that I found out how evil the 117th congress is.”

“They destroyed God’s creation and said there is no gender,” Greene said. “In Genesis it said: God created them male and female. The Democrats declared there is no gender. From that day on I knew that place was evil, because they directly attack God’s creation. We have killed over 62 million people in their mother’s womb…and we fund it. We fund it all over the world, not just here in this country but  also all over the world. What kind of country have we become?”

“He makes more money from the federal government than the President of the United States,” Greene said.

Greene alleged that the coronavirus was developed in the Wuhan lab in China and that Fauci knew that but has covered it up.

“This man sent your dollars and my dollars to the Wuhan lab,” Greene said. “All over the world, they died and they are still dying and who protects him? the Democrats.”

“It is evil,” Greene said of the Nancy Pelosi House. “I cannot believe I work in that place.”

Greene said that President Joe Biden recently gave the American people his permission to have Fourth of July barbecues with our families.

“I hate to tell you Joe, but in Georgia and Alabama we have been barbecuing the whole time and inviting all of our friends over,” Greene said.

“They live in a bubble where they think they know better than you,” Greene said. “I call Washington D.C, the District of Communism because that is what it is.”

“The Democrats have started wearing their masks again,” Greene said adding that she was tired of their virtue signaling.

“It should be your choice,” Greene said of whether or not you wear a mask or get the COVID-19 vaccine. “We shouldn’t judge one another. They need to stop telling parents what they need to do with their children. Our children should not be forced to wear masks or be vaccinated.”

Greene said that Joe Biden, “Is going to be sending one of his police state friends to your door,” to see if you have been vaccinated. “We all love our Second Amendment rights and we don’t like the federal government coming on our property to tell us what to do. You have HIPPA rights and you do not have tell your medical information and you can tell them to get off your front porch and get off your front lawn.”

“I introduced articles of impeachment against Joe Biden,” Greene said. “I was just one of those people that thought there was some real issues with Hunter Biden and his laptop and Joe Biden was complicit in his business deals. About a week after that the Democrats kicked me off of my committees.”

“The House Freedom Caucus is the toughest group of people in Washington,” Greene said. “You have got three members in the house tonight: Barry Moore, Mo Brooks, and myself.”

Greene said that 11 House “Republicans voted to kick me off my committees. That is a list I carry around with me. I will have rallies in their districts.”

Greene said that Pelosi and the Democrats kicking her off of her committees, “Does not really matter. They don’t care what we say. They are pushing their communist agenda for America and don’t care what we (House Republicans) think.”