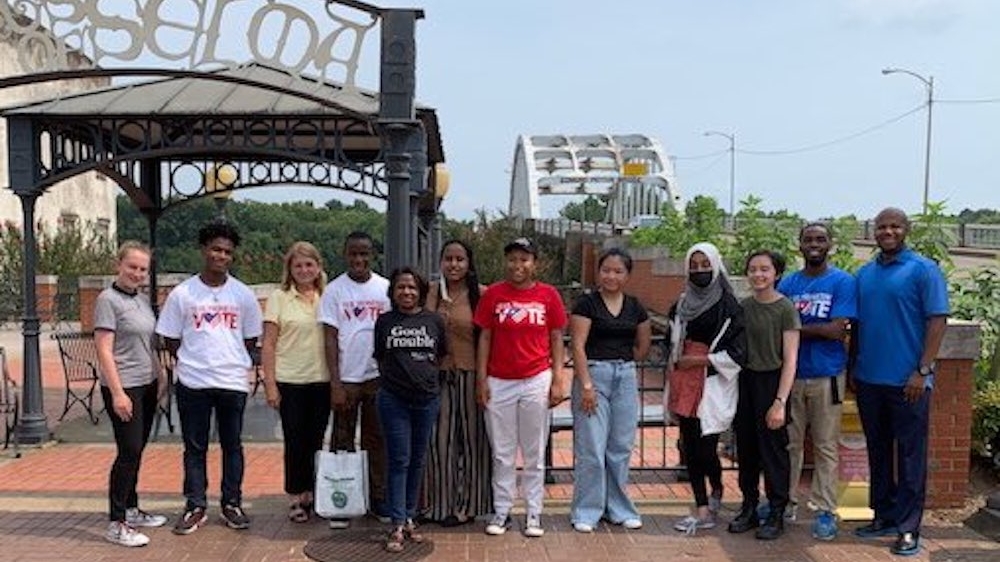 Congresswoman Terri Sewell, D-Alabama, welcomed Rep. Barbara Lee D-California, and a cohort of youth leaders from Alabama and the Martin Luther King Jr. Freedom Center in Oakland, California to the Non-Violence in the 21st Century Summit closing ceremony at the campus of Alabama State University.

The week-long summit brought together 60 high school-age youths from California and Alabama with the goal of integrating young leaders into civic engagement and encouraging action in both states to fight injustice, racism, poverty and violence.

“I am so pleased to welcome Congresswoman Barbara Lee and this delegation of young leaders from the Martin Luther King Jr. Freedom Center to America’s Civil Rights District,” Sewell said. “In order to fight injustice, racism, poverty, and violence, we must learn the lessons of the Foot Soldiers and engage our youth on the importance of non-violence as a tool to bring about social change.”

“With its rich Civil Rights history, there is no place more ideal for this dialogue than Alabama’s 7th District and no place more befitting for this closing ceremony than the historic campus of Alabama State University,” Sewell said. “I am confident that these students will leave equipped with the tools to carry on the legacy of those on whose shoulders we stand.”

The combined California and Alabama youth delegations spent a week together studying the teachings of Martin Luther King Jr. and other civil rights leaders on non-violence as a means of bringing about social change. The delegations also co-taught classes, assisting one another to improve their writing and public speaking skills. In order to get a better understanding of the history of the Civil Rights Movement, the students met with civil rights movement veterans, and elected officials as well as the leaders of various community, faith-based, and labor organizations to learn first-hand the tools to become more effective and proactive leaders.

This summer, we are carrying forth the legacy of our beloved Congressman John Lewis, who inspired so many young people to take the baton and run the next lap of the race for justice and equality,” Lee said. “His spirit is with us as we engage in conversations about dismantling systemic racism and poverty and protecting our sacred right to vote.”

“I am honored to partner again with the Martin Luther King Jr. Freedom Center to provide this opportunity for young people to learn about the legacy of Dr. King and how to fight for justice through nonviolence,” Lee said. “I am so proud of the Oakland youth who are making this journey to be part of the next generation of civil rights leaders in partnership with the young people and organizations of the 7th Congressional District of Alabama. We look forward to welcoming delegates from Alabama to the East Bay as we move toward strengthening ties with our sisters and brothers of Montgomery and Selma.”

Dr. Roy D. Wilson is the executive director of the Freedom Center.

“Our students and staff are participating in the ‘Nonviolence in the 21st Century’ week fully prepared to listen and learn,” said Dr. Wilson. “They will speak up and connect with others who are prepared to own the common responsibility to confront racism, poverty and violence in ways that create an interracial, pluralistic democracy where love and friendship become our basic strategy of living.”

Sewell is serving in her sixth term representing Alabama’s 7th Congressional District. Sewell is a member of the Democratic leadership in the U.S. House of Representatives.

Sewell will also announce a total of $1,000,000 in federal funding for Alabama State and Alabama A&M.