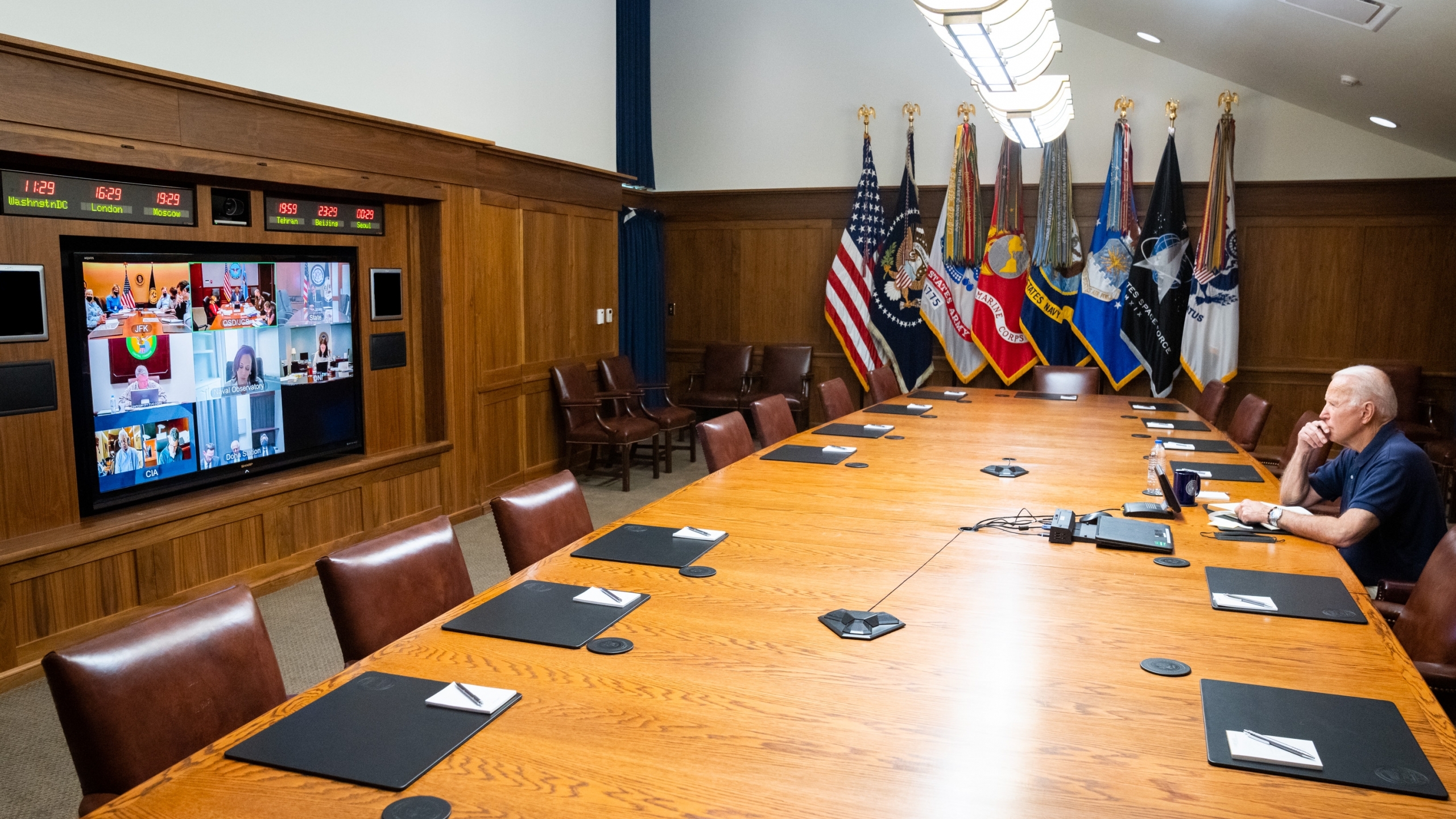 The president and vice president met with their national security team and senior officials to hear updates on the draw down of civilian personnel in Afghanistan.

Rogers criticized President Joe Biden’s speech on the situation in Afghanistan on Monday.

“President Biden’s speech did not match the reality of what’s occurring in Afghanistan,” Rogers said. “Biden did a lot of finger-pointing but it was his indefensible decisions and failure to prepare that have created the security and humanitarian crisis currently unfolding.”

“His words are no comfort to the women and children now forced to live under the repressive Taliban regime,” Rogers said. “Afghans are so desperate to flee the Taliban that they are clinging onto departing American aircraft.”

Three Afghans were killed when they grabbed the landing gear of an American military transport leaving Karzai International Airport. Inevitably, the two men and a woman fell to their deaths.

“Continued weak leadership from President Biden has now created an international security crisis,” Palmer said. “No amount of spin or finger pointing from the White House or State Department can change the outcome of what Americans, and the world, are seeing in Afghanistan. We already have a major national security crisis raging at our southern border due to the President’s willful neglect and his decision to allow Afghanistan to fall will only make protecting the homeland more difficult.”

Biden has blamed the Trump administration for the epic disaster.

“President Biden needs to realize this disaster is his creation and his alone,” Palmer said. “Not only has he displayed weakness to our global enemies, but he has also condemned yet another generation of Afghanis to brutal subjugation by radical jihadists. My prayers are with the thousands of U.S. troops, civilian personnel, and faithful allies still awaiting evacuation.”

“What we’re seeing happen in Afghanistan is the direct result of failed leadership from the Biden Administration,” Aderholt said. “Much like the President’s economic failures and his handling of the border crisis, he and his team never seem to have a plan for anything. This collapse in Afghanistan puts our nation in danger again because this will become the epicenter of terrorism once more.”

Tuberville said: “Thousands of Alabamians and millions of Americans have honorably defended our freedoms in Afghanistan – the situation should have never unfolded this way.”

“I’ve been closely monitoring the events and my office has been responding to calls from concerned veterans and constituents with friends and family in Afghanistan,” Tuberville said.

Carl said simply of the Afghanistan collapse: “This is one of the greatest embarrassments of my lifetime.”

Ainsworth said: “President Joe Biden is endangering global security with his haphazard retreat in Afghanistan and weak-kneed diplomacy.  I believe in an America First foreign policy, and I also believe in finishing what you started by winning.”

“President Biden will go down in history as one of the worst and most incompetent presidents in my lifetime,” Ainsworth said.

Brooks went even further and suggested that Biden should resign over the debacle.

“Who agrees that Joe Biden completely botched the withdrawal from Afghanistan?” Brooks said on social media. “It’s time for Joe Biden to resign!”

Gen. David Petraeus, who previously served as the top U.S. commander in Afghanistan, described the fall of several Afghan cities to the Taliban in recent days as “disastrous.”

“This is an enormous national security setback and it is on the verge of getting much worse unless we decide to take really significant action,” Petraeus told The Rita Cosby Show on WABC Radio on Friday before the fall of Kabul.

Petraeus said he had feared a “psychological collapse” months ago because the U.S. withdrawal of troops had prompted the removal of NATO troops along with thousands of contractors who had maintained the Afghan Air Force.

President Joe Biden announced in April that U.S. troops would fully withdraw from Afghanistan by Sept. 11. That deadline was later moved up to Aug. 31, and most troops had already left the country when the remaining Afghan National Army soldiers deserted or surrendered.

On Saturday, Biden said he had authorized the deployment of 5,000 U.S. troops to Afghanistan to ensure “an orderly and safe drawdown” of U.S. and other allied personnel. On Sunday, Taliban fighters were in the Afghan capital of Kabul, as the U.S. fled the embassy and is now desperately loading Americans, our allies, and Afghans who worked with us onto military aircraft at Karzai International Airport.

Petraeus said the Taliban’s advances had shown that the decision to withdraw U.S. troops from Afghanistan was “a serious mistake.”

“We should really take stock of what has happened and acknowledge, I think, that this was a serious mistake, and ask ourselves if having had 3,500 troops on the ground with no battlefield losses for 18 months with a manageable situation was not preferable to the catastrophe that we see unfolding in Afghanistan now,” the retired general said.

“There are no good outcomes here. In fact, there’s nothing more than horrible outcomes unless we are willing to acknowledge that this is not going as apparently the more optimistic projections laid out, and then take stock of the situation and re-examine what we could do,” Petraeus said.

“Remember what happened when Syria melted down?” Petraeus said. “We used to describe it as a ‘geopolitical Chernobyl’, the meltdown of a country that spewed violence, extremism, instability and a tsunami of refugees.”

Those who made the decisions need to “own it,” Petraeus said. “In this case, the results cannot be sugar-coated… there was a saying that we occasionally used for really bad days and I said, look if it’s a really bad day in Baghdad or Kabul, just go out to the podium and say we had a terrible day. Don’t put lipstick on a pig. It undermines your credibility.”

The Biden decision to pull out of Afghanistan was a political one as “ending forever wars” was a popular talking point on the campaign trail and both he and President Donald Trump had advocated a pull out of Afghanistan. Members of Congress warned Trump that the results of a withdrawal from the country would be disastrous and blocked Trump from doing so, suggesting that the former president did not fully grasp foreign policy or the situation in Afghanistan.

According to Friday reporting in the Wall Street Journal, top U.S. military commanders warned Biden that a withdrawal would be disastrous. He ignored the military’s top generals and made an agreement with the Taliban for an unconditional withdrawal by Sept. 11 anyway. As both presidents were warned by the experts, the result of a hasty American pullout has been a military, humanitarian and diplomatic disaster that draws parallels with the collapse of the South Vietnamese government and the fall of Saigon in 1975, except that ARVN forces fought bravely for two and a half years after the U.S. withdrew from that country, while most of the Afghan Army laid down their weapons without firing a shot.

“Why was there never a plan? Why is there still not a plan?” Rogers asked.