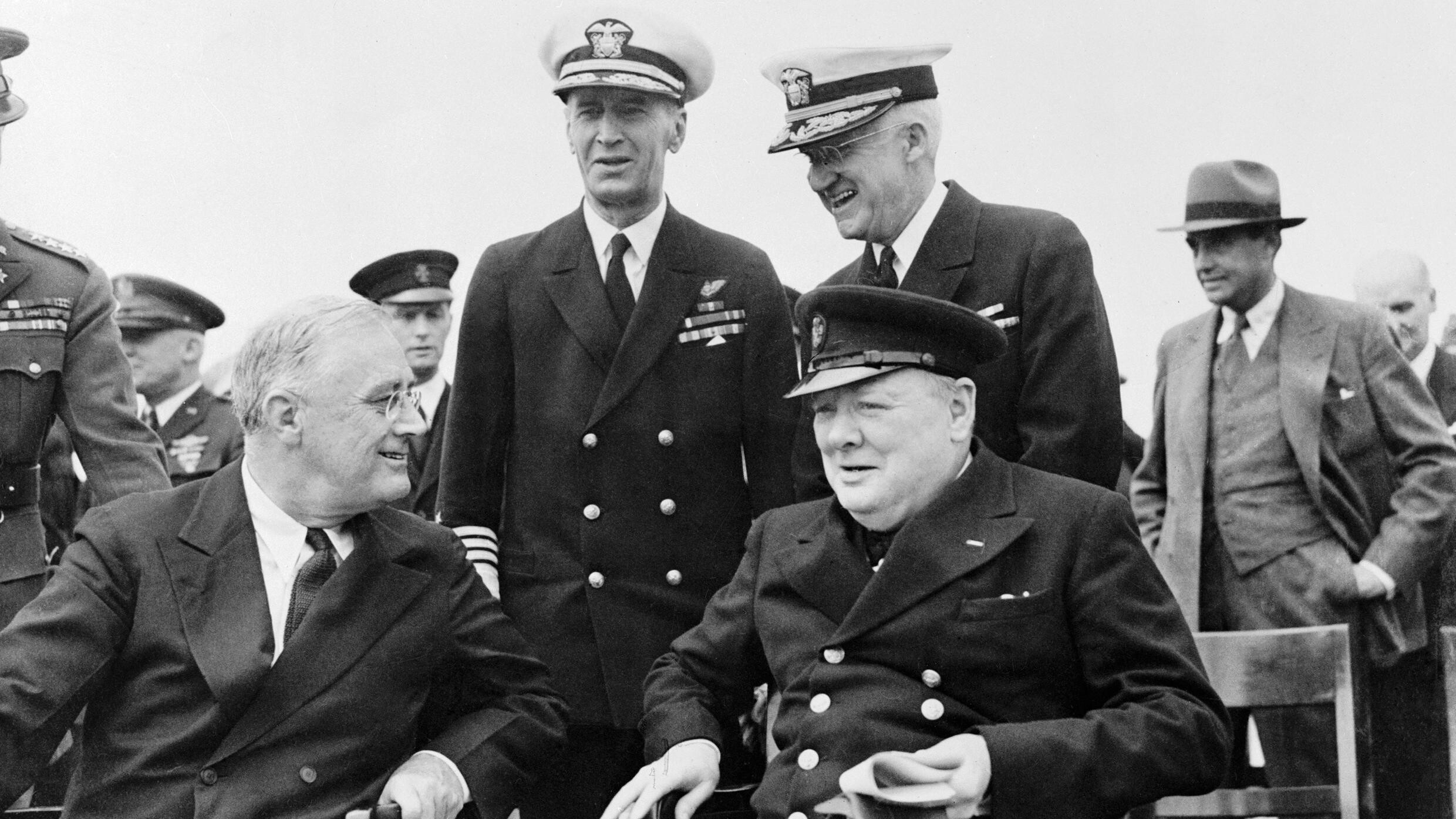 President Roosevelt and Winston Churchill seated on the quarterdeck of HMS PRINCE OF WALES for a Sunday service during the Atlantic Conference, Aug. 10, 1941.

Imagine your football team is in the first quarter of a game, a couple of star players are sidelined and the opponent’s offense seems unstoppable. The score is already 28 – 0 when your head coach takes a time out.

He lets his assistants coach up the team while he meets with an architect to design a new stadium to display championship trophies and meets with another head coach to discuss developing a new conference with  more efficient rules to increase attendance and enthusiasm for the game. Sound farfetched? Eighty years ago, something like this actually happened – but not on the gridiron.

In August 1941, World War II was almost two years old. While Britain was still in the game, her prospects for success were far from certain with no feeling of inevitable victory. Good news on the battle front was hard to come by, but inspired by Winston Churchill, the English people continued to maintain the stiff upper lip of optimism.

President Roosevelt couldn’t know that Pearl Harbor was four months away and American ambivalence about the war in Europe was high. Nevertheless, Roosevelt understood the dangerous world situation and the probable and unavoidable entry of the United States into the conflict.

For the first time since Churchill had become prime minister and Roosevelt had become president, these two leaders meet at Placentia Bay, Newfoundland to discuss the future not only for their respective countries, but also for the world.

After a series of agenda-less meeting, not only between the two leaders, but also among their staffs, they issued a remarkable statement that was later dubbed “The Atlantic Charter.”

Perhaps one of the most interesting things about this communique, is that it was never really reduced to a writing and signed by each country. In fact, it was never ratified by Congress or approved by Parliament. Rather, it was an eight-point idealistic explanation of a post-war agenda to outline to the world at large what the fighting was all about and to anticipate an Allied victory.

In a nutshell, the Atlantic Charter made it clear that the British and Americans were united against the aggression of the Axis powers. While the United States had not entered the war, the Charter affirmed a solidarity between the two countries and set the stage for American dominance as a world power.

The Charter further presented a view that relationships between nation states would be founded on reciprocal trade agreements emphasizing open markets on equal terms for both the victor and vanquished. This stood in stark contrast to the unfavorable trade arrangements that punished Germany after World War I and precipitated Hitler’s rise to power.

One new principle – perhaps the most controversial – was the right of all peoples to self-determination. This concept was the logical conclusion that since Britain and the United States did not have territorial ambitions and would not support nations using armed conflict to expand their borders, something must happen to nations overrun by the Axis blitz. The clear implication, probably unintended, was that after the war, people within a defined boundary could choose their government, effectively ending colonialism and establishing new countries based on the consent of the governed.

The basic tenants of the Atlantic Charter were presented to other Allied nations and generally adopted in principle. The contents were printed on leaflets and dropped over Germany to repudiate the propaganda of any punitive post-war settlement.

In Japan, the Charter bolstered anti-American sentiment and was used to show a conspiracy against the insecure nation. Natives under the thumb of colonial powers believed the Charter promoted their rights to independence thus emboldening a commitment to the Allied cause.

One of the most striking features of the Charter was its impact despite having no authority or force of law from ratification by any government. Rather, the Charter was an agreement between two leaders of substantial stature in the world. Its binding impact was a reflection of personal leadership and integrity indicating that if these two giants made a statement about their goals for a future world order, their credibility gave other countries confidence that the Charter would be implemented.

Only great leaders can do things like this. Powerful personalities and bold initiatives characterized both men. In fact, the year before the Atlantic Charter, Roosevelt and Canada’s Prime Minister, Mackenzie King, would complete the Ogdensburg Agreement which established a mutual defense agreement between the neighboring countries. Like the Atlantic Charter, this agreement was never ratified by any political body but expressed a mutual agreement between strong leaders protecting their countries. To this day, the Ogdensburg Agreement serves as an expression of the mutual defense of Canada and the United States.

The Atlantic Charter galvanized the Allies by outlining post-war aims. Its expressed objectives for creating a stable world order were reflected in the creation of the United Nations, but the collective security of that body was thwarted by Soviet ideology which eschewed any sense of international cooperation and fairness.

The Atlantic Charter achieved its near-term objectives by precisely outlining why the allies were committed to the fight. In the long term, it failed to create a structure for nation states to live in harmony without the threat of territorial ambitions of a neighbor.

International organizations work best by providing a loose framework that exalts private property rights and promotes the rule of law. The Atlantic Charter assumed this, but the United Nations became a pawn for the Russians who used principles like self-determination to obtain control over misguided revolutionaries by convincing them communism and not democracy was a counterweight to colonialism.ht to colonialism.